This Passover the seders are virtual. The plague is real

Which Jacksonville ZIP codes have the highest number of reported COVID-19 cases?

Sources: 78-year-old woman 1 of at least 9 people at Macclenny nursing home who tested positive for COVID-19

Prime locations to view fireworks over St. Johns River, in addition to Landing

JACKSONVILLE, Fla. – This year's Red, Hot & Boom Fourth of July celebration at the Jacksonville Landing is expected to bring thousands of people to downtown Jacksonville.

There are several prime locations, all of which offer something a little different, to watch the spectacular display over the St. Johns River.

The fireworks will launch from two different locations: the Acosta Bridge and from a barge near the Main Street Bridge.

“The unique thing about this location is that its shot off from two areas and it’s above the St. Johns River, which is a staple here in Northeast Florida," said Brent Fine, special events manager for the city of Jacksonville. "You can come down here, have a seat, enjoy the show and the bridges in the background, and it’s a spectacular view."

City officials reminded people planning to check out the fireworks not to park on the Fuller Warren because Interstate 95 will stay open during the fireworks show.

The eastern most northbound lane of the Acosta Brigde will close at noon Wednesday, and the bridge will close completely from 9:15 p.m. to 11 p.m. for the fireworks display.

Going downtown to watch fireworks for the #4thofJuly Wednesday? Here are the viewing areas.

REMINDER: You can’t stop or park and get of your vehicle on ANY bridge to watch fireworks. Fuller WARREN will be monitored by @FHPJacksonville and we will have tow trucks ready to tow. pic.twitter.com/8vZB2gNh8Y

But there are plenty of options for spectators to get a glimpse of the show.

People say one of the best places to watch the fireworks is Friendship Fountain, along the Riverwalk on the Southbank, because it's spacious and great for families.

“My kids have a lot of space," Chakeiya Nixon told News4Jax. "We don’t have to be crowded and things like that.”

People say you can also get a magnificent view of the fireworks from the site of the Riverside Arts Market, under the Fuller Warren Bridge.

“I’m excited about the fireworks," Tara Hyman said. "I just got married, so it’s a celebration all the way around.”

If you want to watch the fireworks from a different vantage point, you can check out one of several restaurants with rooftop seating, such as Cowford Chophouse on East Bay Street in downtown Jacksonville, where the new restaurant is celebrating its first Fourth of July.

“It’s almost private," said Jacques Klempf, owner of Cowford Chophouse. "You heard all the noise. You saw all the fireworks. You can sit down and get something cold to drink or get a bite to eat."

In the Riverside/Five Points area, there are a couple of options for rooftop viewing, including Black Sheep Restaurant on Oak Street.

River and Post, located on Riverside Avenue, will also be hosting its inaugural Fourth of July celebration.

If you are planning on going to the Landing, there will be a concert. 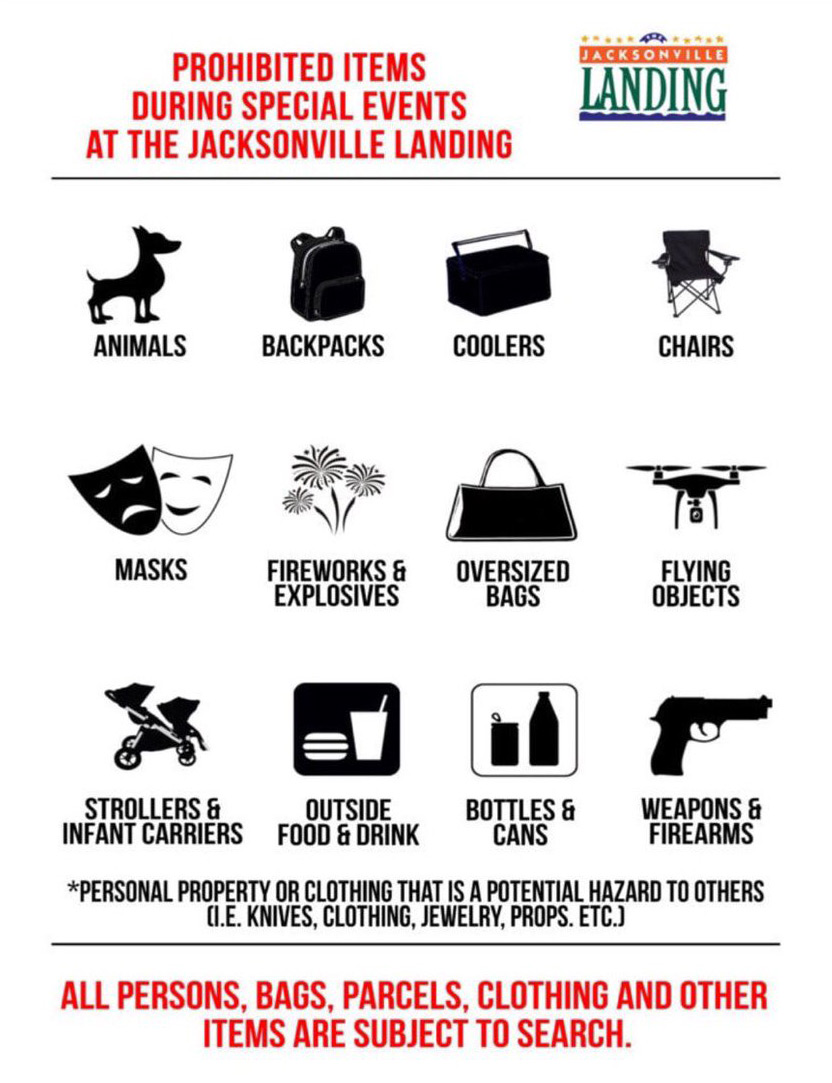 You will also be steps away from where the fireworks will be set off.

It's a perfect opportunity for families checking out the fireworks for the first time.

"This will be my first year," Carlos Quinche said. “I’m not really a fan of the big booms, just the glittery stuff.”

News4Jax reporter Vic Micolucci will also be live from The Landing for "Red, Hot & Boom," which will be televised on WJXT from 8-10 p.m. Wednesday.

If you are planning to come to the Landing this year, the Jacksonville Sheriff’s Office says that anyone 17 and younger must be accompanied by an adult.

Going to @JaxLanding on Wednesday to celebrate the #4thofJuly? Here is what you need to know.

💥18 and up unless you are with a parent.
💥Do not drop any child or children off. They will be left wandering the streets. They will not be permitted inside.#JAX #Jacksonville #JSO pic.twitter.com/z3bodlZr2r