News4Jax's special hourlong broadcast of Red White and Boom! will conclude with a 15-minute fireworks display over the St. Johns River downtown on the Fourth of July.

The fireworks show will light up the sky at 9:45 p.m. Thursday. This year, fireworks will be launched from two locations, the Acosta Bridge and a Mobro Marine barge on the St. Johns River just east of the Main Street Bridge.

A lot of time and planning goes beforehand to make that happen.

On Tuesday, News4Jax went behind the scenes with Pyro Shows, the fireworks company based in Tennessee, to see what it takes to put together a fireworks spectacular.

Pyro Shows has been working the city’s annual Fourth of July fireworks show for several years. The planning process began about two weeks after last year’s show. Music soundtrack approval and choreography began at the start of 2019. Now, a few days away from the big show, crews are getting the firepower lined up, wired up and ready to go.

Crews have spent countless hours prepping the Mobro Marine barge in Green Cove Springs. A tugboat will tow it just east of the Main Street Bridge on Thursday afternoon, and the trip  will take about three hours. The barge is about 150 feet long and will carry 60 wooden racks and between 400 and 500 mortars that are connected by thousands of feet of wire and loaded with about 1,000 pounds of gunpowder. In addition to the barge, the same amount of fireworks will be launched off the Acosta Bridge.

“It’s like machine guns going off if you are next to them,” said Peter DiCocco, with Pyro Shows.

The setup process has to be precise and crews need to be incredibly careful with how they handle the fireworks.

“Safety is key. But believe it or not, static electricity can sometimes set these things off, so you want to be very careful with anything that could generate static. It’s not just a matter of just popping them down and lighting the fuse,” DiCocco said.

Crew leader Bill Thompson admits it is a dangerous job.

“You can have your arm blown off or you could get killed if you were in the wrong spot at the wrong time,” Thompson said.

“We like to hear the applause and the emotions from the crowd. That gives us a boost. We are here for the enjoyment of the people,” Thompson said.

Though the fireworks company is based out of Tennessee, the crew that News4Jax met Tuesday is made up of locals, so they are excited to see the final result. They said spectators and viewers can expect a fresh, redesigned show this year -- about 12 minutes in total with an exciting grand finale.

Tens of thousands of people are expected to pack the downtown area for the annual display. 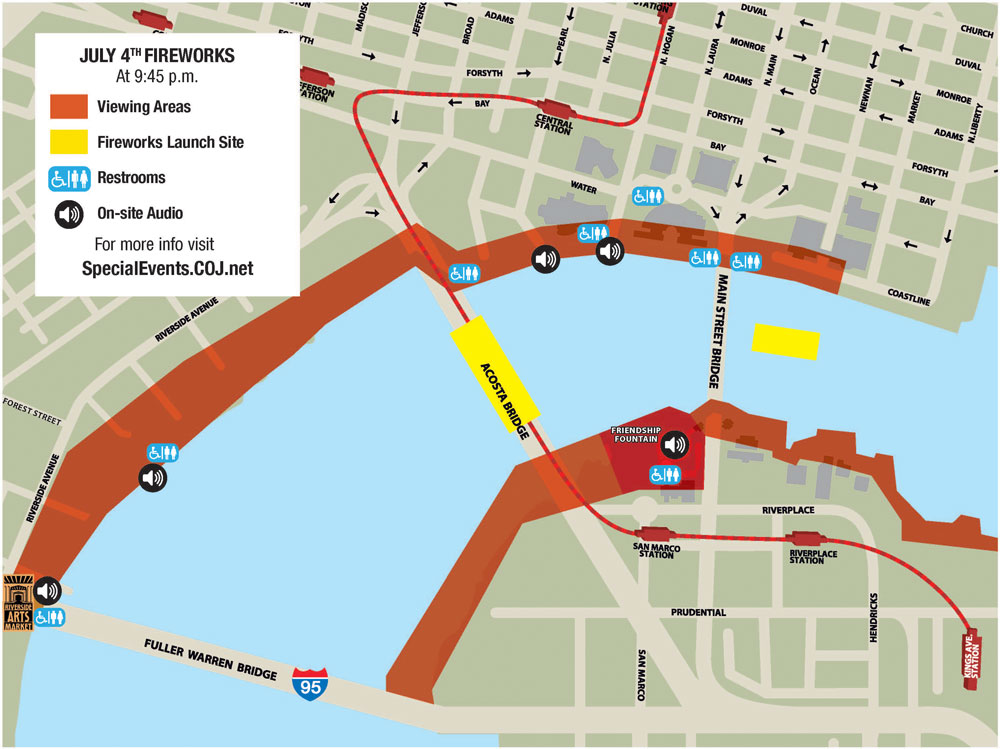 The best spots to watch from are along the Northbank and Southbank, from the Brooklyn area and under the Fuller Warren Bridge near the Riverside Arts Market site. The city said open space at the Jacksonville Landing, including the courtyard, will be open for spectators to set up chairs and watch the show, although no businesses remain open.

For many locals, the annual show has become a tradition.

“Since I was a kid, I have been coming down here. I’ve lived here all my life and it’s just a beautiful site,” said longtime resident Ronnie Hines, who is glad he can watch from his usual spot at the Landing this year.

For those coming downtown by car, public and private parking lots and garages downtown will be open. Prices will vary, depending on the location. City officials told News4Jax that metered parking spots will be free.

Thursday's Independence Day show is free and all ages are welcome, but anyone under 18 must be accompanied by an adult. Wristbands will be passed out at 7 p.m. to get access to the outside deck stage at River City Brewing Company.

Doors open at 7 p.m., with performances by up-and-coming singers beginning at 8 p.m. The live TV broadcast begins at 9 p.m. The city of Jacksonville will then start its fireworks show at 9:45 p.m.