Cloudy and breezy early then less wind and more sun

Back-to-school spending is expected to reach $83.6 billion this year nationwide. That's up 10 percent from $75.8 billion last year. Florida shoppers are estimated to save $33.4 million this year.

Some items on the list are pencils, markers, crayons, paper and backpacks. Clothes, footwear and certain accessories for $60 or less are eligible as well. 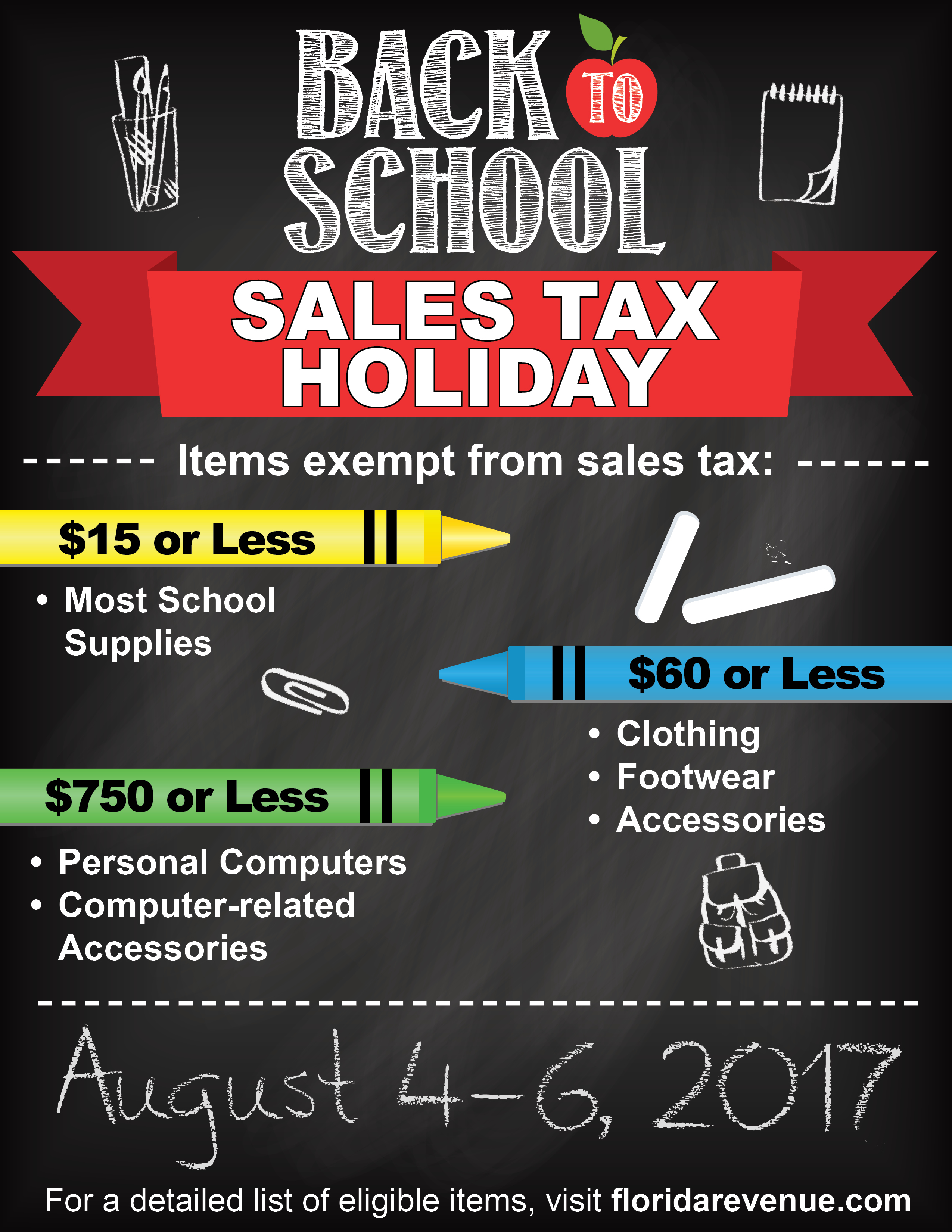 James Miller, a spokesman for the Florida Retail Federation, said the tax holiday is “much needed at this time of year,” as families buy clothes, supplies and other items before school starts.

“Families are going out and stocking up anyways,” Miller said. “Being able to save 6, 7, 8 percent is really big.”

One relief for parents this year is that personal computers are back on the list of items eligible for the tax break.

The Florida Retail Federation and its members urged lawmakers during this year's legislative session to put computers back on the list of eligible items.

Eligible items are computers and certain computer-related accessories that sell for $750 or less. Shoppers who purchase a $750 computer would save about $50.

The tax holiday also applies to a number of items for adults, including purses, suits and ties. Diapers, diaper bags and baby clothes are also tax-free during the holiday.

A House bill analysis estimated the holiday period will reduce state revenue by $26.6 million and local government revenue by $6.8 million.

The state has offered back-to-school tax holidays most years since 1998. Computers return to this year's list after being left out of a 2016 tax holiday.

Two years ago, meanwhile, the holiday ran 10 days, with the clothing limit at $100 and a discount on the first $750 of the sales prices of computers.

Florida retailers have long backed the tax holidays. But not everyone thinks such discount periods provide wide-ranging benefits.

“Shoppers waited until the holiday to purchase exempted goods, thereby slowing sales in the weeks prior to and following the holiday,” the study said.

The Tax Foundation questioned the expense of having to recalibrate store computers for the discount periods and called the holidays “a gimmick that distract policymakers and taxpayers from real, permanent, and economically beneficial tax reform.”

The foundation also labeled the discount periods as a form of “picking winners and losers” --- a favorite target of many Florida politicians opposed to business incentives --- by favoring products and industries through arbitrary tax exemptions. The foundation also maintained that large businesses lobby for the holidays as a way to receive free advertising.

“I know there are reports out there saying these sales-tax holidays aren't that good for retailers,” Miller said. “One thing I would say is if that was the case, retailers wouldn't be making this one of their significant legislative priorities year in and year out.”

He added that many retailers that don't offer items on the state's discount list take advantage of the period by offering their own sales.

“There are tens and tens of thousands of retailers in this state that benefit from this,” Miller said. “There are others retailers that can piggyback on it and have promotions in conjunction with it. That's what I would do if I were a retailer. When you consider technology, clothing and supplies, that is a large number of retailers that will be eligible. We are excited about the weekend, and we know they are too.”

Florida, one of 16 states this year offering back-to-school breaks, also offered a tax holiday on disaster-preparation items in June to mark the start of hurricane season.

Georgia will not have a tax-free weekend this year, so expect more shoppers from there to be in Florida for the back-to-school deals.