Long stretch of warm and mostly dry weather this week

When you see a performance as stunning as Gary Oldman's in the new biographical World War II drama "Darkest Hour," it begs the natural question of where Oldman the actor ended and his channeling of legendary British Prime Minister Winston Churchill began. On the face of things, it's easy to presume that Oldman's transformation took place somewhere in the daily three and a half-hour makeup process and extra half-hour to assemble the costume; but for the master thespian, becoming Churchill to face the darkest hour in the history of Great Britain took a lot longer than people would imagine.

"It takes the better part of a year to work on the role, and that includes all of the things that you would imagine. You read the material and then go to the books and the news footage and speeches, and all of that stuff," Oldman told me in a recent phone conversation from New York City. "What it becomes is a year of one's life in surrendering to all things Winston. But there is only so much of the work that you can do in isolation. So, I decided that once the script was finalized and there were various changes made to the script as it evolved, that I learned it like a play. I knew it long before I got to the set so I'd just have the material inside me and wouldn't have to think about it. It's like the old saying, 'It's not how well you've known something, but how long you've known it,' so the role was in my DNA."

Now playing in limited release and expanding to more locations throughout the country on Friday, "Darkest Hour" chronicles a short yet remarkable time in the life of Churchill in 1940, when the legislator was suddenly escalated to the post of prime minister because of the resignation of his predecessor Prime Minister Neville Chamberlain (Ronald Pickup), who lost the confidence of Parliament. With little support from either side of the political aisle and perhaps most importantly, King George VI (Ben Mendelsohn), Churchill was faced with either negotiating for what it sure to become a doomed peace treaty with Nazi leader Adolf Hitler, or take a stand to fight for the ideals, liberty and ultimately, the freedom of Great Britain.

Intensifying the situation, however, is that whatever tact Churchill takes, it must be accomplished in a matter or mere weeks. Nazi forces are moving across Western Europe and have 300,000 British troops surrounded with seemingly nowhere to go on the beaches of Dunkirk in France.

Written by Anthony McCarten and directed by Joe Wright, "Darkest Hour" comes at an interesting time in the state of politics in both the U.S., where the divide between liberals and conservatives is as deep as perhaps it has ever been. But there shouldn't be a quandary for audiences rooting for Churchill -- who early in his career moved from the conservatives to the liberals, only to switch back to the conservative party 26 years prior to the dire circumstances Great Britain faced in "Darkest Hour" -- simply because partisanship has no place when it comes to fighting evil.

"There's nothing either partisan or bi-partisan about going after Hitler," Oldman said. "It's an interesting question, though, because Churchill made himself at times unpopular, because this was a man who made mistakes in his career as we all have. He certainly made some blunders. But as far as Hitler was concerned, Churchill was almost clairvoyant.

"He caught on to Hitler very, very quickly -- way back in the early '30s," Oldman added. "Once he got a taste of it, he came back to the UK as a backbencher. He stood up in Parliament and said, 'We should rearm -- this guy is coming after us,' but no one would believe him, because it was unthinkable, especially after the first World War that there would be another war. Pacifism was very universal, and they wanted to repair relationships with the Germans, so what Churchill was doing was considered a little politically incorrect and scaremongering. But he stuck to it. He never wavered from it -- and he was right." 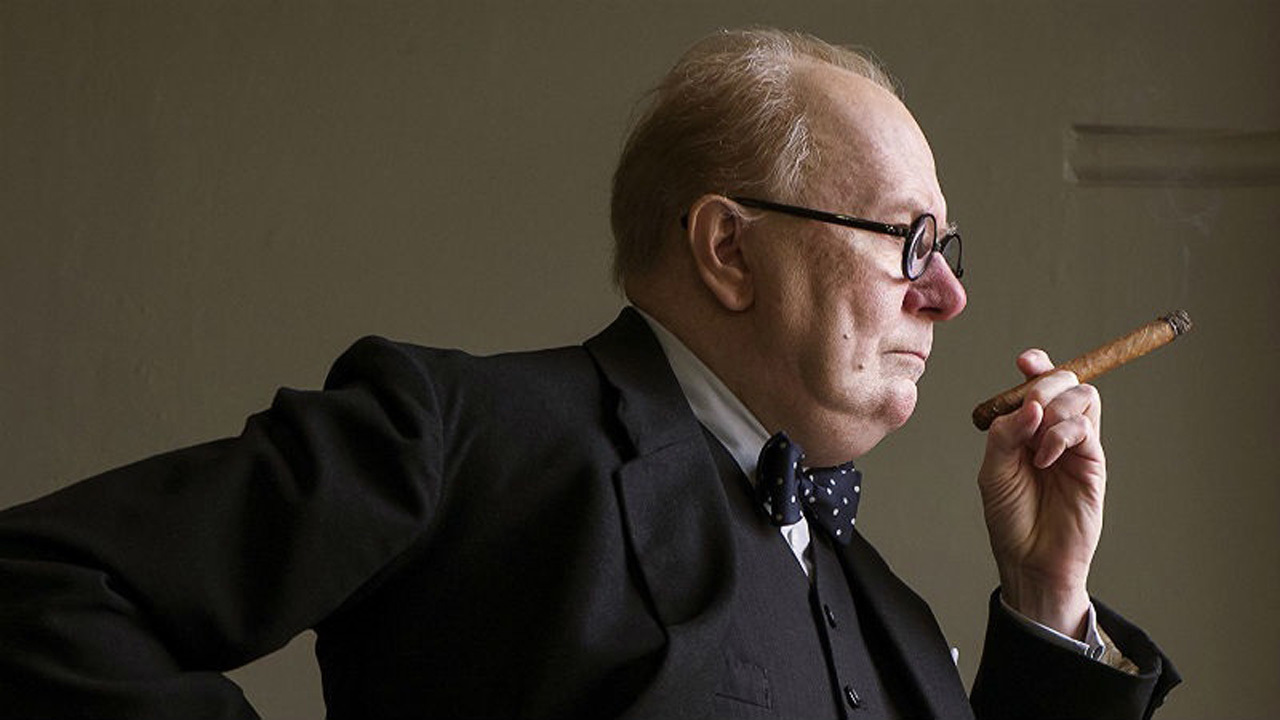 In some ways, Oldman believes Churchill was destined to be at the right place at the right time in history; all of which stemming from a singular incident in World War I that's recounted in "Darkest Hour."

"If one of those bullets that he talks about in the first World War, when he is quoted, 'There is nothing more thrilling than being shot at without result,' if one of those stray bullets would have hit him and removed him from the scenario, or if he had worn out in Parliament and capitulated, then the landscape would have looked very different," Oldman said. "All of Western Europe would have been fascist … and while people say it, and they say it in jest, 'If it wasn't for Winston Churchill we'd all be speaking German,' there's some truth in that."

Not surprisingly, Oldman is already a favorite for a Best Actor Oscar nomination for his performance as Churchill, as are Wright and the film for Best Picture and Best Director, respectively. But in coincidental bit of timing, another film about the pivotal events depicted in "Darkest Hour," "Dunkirk -- director Christopher Nolan's spectacle about the soldiers trapped on Dunkirk Beach -- is also considered an odds-on favorite for Oscar nominations.

No matter how the Oscar race shakes out, Oldman agreed with my observation that the true victor is not either "Darkest Hour" or "Dunkirk," but history itself, as the acclaim both films are receiving essentially ensures that these life-changing historical events will never be forgotten.

"It's interesting when we screen this film. I can forgive the Americans for not knowing the real details of what happened, but you'd be surprised to the number of people that we screened it to in Britain who don't know this story outside of scholars and historians, and people that really follow it and look at history," Oldman said. "It's amazing the number of people who said, 'Oh my God, I had no idea.' So, both films present a story very much worth telling and I couldn't have put it better: History wins on this one."