The Aardwolf is coming to San Marco

JACKSONVILLE, Fla. – The following responses are principally by Michael Payne and Preben Olsen, the two partners in the recently initiated Aardwolf Brewing Co., LLC venture to be located at 1461 Hendricks Avenue in San Marco. Both individuals are Jacksonville natives and graduates of Episcopal High School. Michael is well known locally for his craft beer brewing prowess. Preben is a recognized expert in the retail side of beer sales as well as his unorthodox beer related guerilla marketing tactics (to date for others) most evident during football tailgating events.

Metro Jacksonville:  Can you provide a brief description of Aardwolf Brewing Company's plans for the planned Hendricks Avenue location?

Preben: Like most craft breweries nationally, Aardwolf's facility will consist of two components – the brewery itself where various styles of beer will be commercially produced in volume for distribution around the City – and a taproom allowing for on-site consumption. The taproom will operate as a bar and is being sized sufficiently to allow for special events, meetings, parties, etc. Wine will also be available for those not desiring to partake in the "craft beer experience".

Metro Jacksonville: Why did you select San Marco for this project?

Michael: The locale in general exhibits a lot of qualities that appeal to us and we can really see the potential for our brewery to become part of the San Marco neighborhood. The old "City of South Jacksonville" Utility building attracts us as well, with its history and atmosphere. As an original "Florida Ice House" from the 1920's – it just stands out as both an ideal and unique setting for the development of a craft beer brewery. My initial conversations with the building owners regarding its potential use as a brew-pub date back almost three years.

Metro Jacksonville: When do you anticipate brewing operations starting at the Hendricks Avenue site?

Michael: If things fall into place, sometime in late 2012. There is a substantial amount of work to be done within the building and since the time it takes to get a Federal brewing permit can vary drastically based on the number of applications in the queue nationally, it is really too early to try to nail down an actual opening date. The tap room however, will precede brewing operations and should ideally be open by mid-fall. At first we will serve craft beers produced by others.

Metro Jacksonville: Do you plan to bottle and distribute your products?

Michael: Initially, we will be selling draft beer by the keg through a distributer to commercial accounts principally in the Jacksonville area. After we are up and operational, we plan to eventually bottle beer. As we grow, distribution could become regional.

Michael: Jacksonville (like the national beer scene) has experienced a boom in craft breweries in the last few years, but we are really only scratching the surface locally when compared to well established markets in other parts of the country. At Aardwolf, we want to push the envelope in terms of beer styles and techniques that have yet to be seen in northeast Florida, while also firmly placing the quality of our beer and ingredients as our first priority. We are too far from actually brewing to reveal any more than that, but I like to think that when it comes to differentiating ourselves, the beer will eventually speak for itself. Moreover, the brewery's 2,500 sf taproom, located in the center of a 1920's brick ice house, will in itself be a unique addition to the Jacksonville craft brew scene. 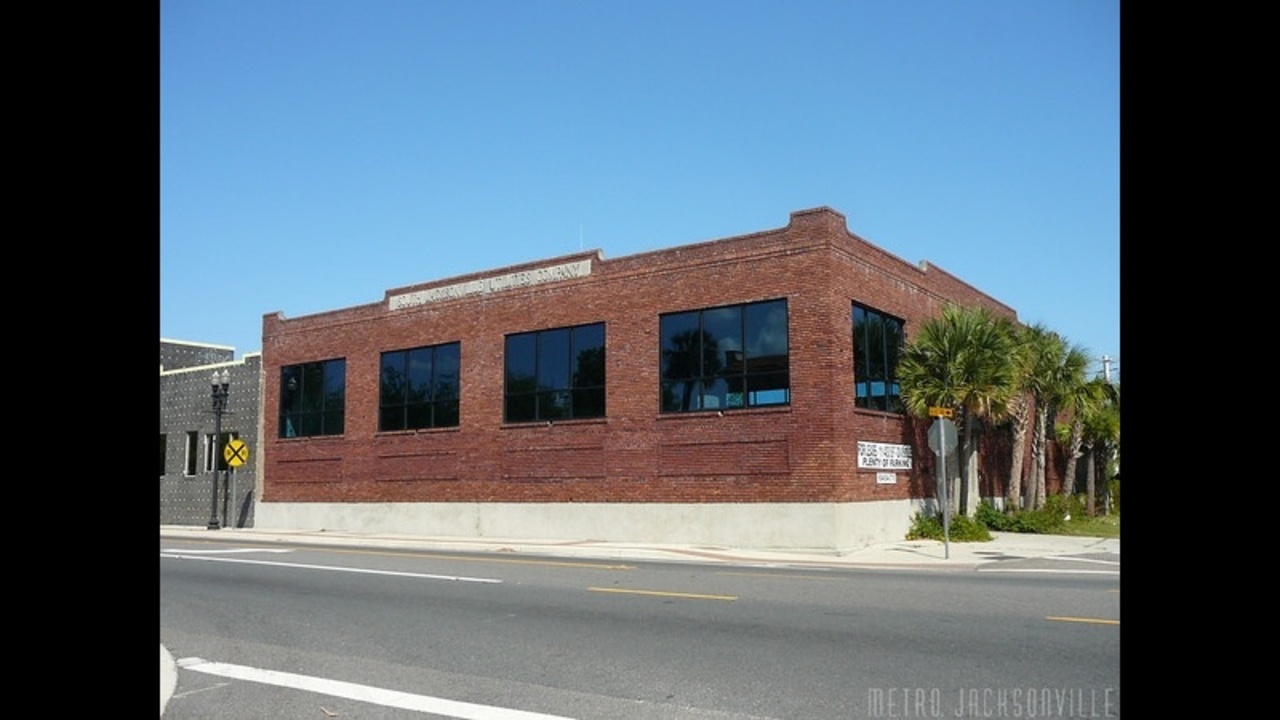 The building Aardwolf plans to occupy was constructed in 1927 as an ice plant for Joseph Howe's South Jacksonville Utilities Company. The company would operate under several names, such as the Southern Service Company and Consumers Ice Company, until 1954. In 1954, the building became the home of the Moyer Marble & Tile Company, which remained on site until the early 2000s.

Metro Jacksonville: How difficult has it been to coordinate getting all the necessary permits, inspections, etc. with the City of Jacksonville? Do you believe that Jacksonville invests enough in its entrepreneurial economy?

Aardwolf: We are still in the rezoning process and therefore are not able at this time to administratively seek permits to construct. As a result, we cannot viably comment on that process.

Interesting question. With respect to the COJ encouraging its small business type entrepreneurial economy, we may have "missed it? but we have not seen any obvious avenues of assistance for which we may be eligible. It is something the City may want to consider since it's difficult to envision how the downtown can eventually develop in the manner desired being that much of the support infrastructure needed for company or residential relocation must eventually come from the efforts of the small business person/entrepreneur. One needs only to look at San Marco, Avondale, Riverside, etc. to understand what the "small business" contributes to the desirability of those areas of town as preferred places to live.

Metro Jacksonville: What has been your experience with the current City of Jacksonville rezoning regulations in regards to moving forward with your project?

Aardwolf: Currently we have found that our project necessitates a P.U.D. Unfortunately, that approach takes additional time. To date, the COJ Planning Department staff has aptly guided our consultant team as to how to best address the issues facing the redevelopment of an existing quasi-historic industrial building without having to be procedurally lumped in with the same siting regulations that control the typical new construction "strip-center."

The latter is something in our limited experience that the City Council may want to consider addressing by Ordinance. That is to say, new development and redevelopment can be (and usually are) different, but the City Codes do not allow for flexibility or rational interpretation based upon circumstances. One would assume that this issue probably has important relevance to the future redevelopment of existing older and architecturally significant buildings (like the San Marco Ice House, but downtown) – be they commercial or residential.

In addition to the City Planning Department staff, we have benefited greatly from the support, guidance and advice of the San Marco Preservation Society as well as District 5 Councilwoman Lori Boyer. The proposed brewery's credibility in the rezoning process has likewise been enhanced by having landlords who are both well-known and highly respected within the San Marco community.

Metro Jacksonville: When did you realize that your next career move would be the development of a brewery?

Michael: I went to school for ceramic art and pursued that career path for a few years, but eventually decided that it wasn't going to be something I could make a living doing. In 2007 I decided that my other passion, beer, was something I might be able to make a career out of and went to brewing school at the Siebel Institute in Chicago and the Doemens Academy in Munich. From there I went on to work at Terrapin Beer Company in Athens, Ga., and then helped start Brewer's Pizza in Orange Park. Opening this size brewery facility has been my goal for the last six years and everything I have done during that time has been with the intention of learning to brew the best beer possible. For me, this brewery is a dream that is finally being realized after years of effort.

Preben: After moving back to Jacksonville several years ago with a marketing degree from Auburn University, I quickly learned that the economy and demographics were severely limiting the job market options in my chosen field. Fortunately, I found a job at Grassroots in Five Points where the owners would eventually impart their love of craft beer to me. It's through the medium of craft beer sales I met Michael Payne. For the past 3 years I have been honing my skills and knowledge of the craft beer industry locally as well as nationally with thoughts of potentially someday seeking a regional marketing position for a craft brewery. Michael approached me about participating in the opening a local brewery nearly a year ago, and I haven't looked back since. Being able to market your own product, and being a part of the rapidly evolving City of Jacksonville beer scene is the best of all worlds…..

Metro Jacksonville: What is your vision for Hendricks Avenue and what role does Aardwolf Brewing Company play in that vision?

Preben: With the concurrent development of the San Marco Train Station across the street (a fortuitous unplanned occurrence), we believe that the brewery will contribute to the gentrification of an industrialized section of Hendricks Avenue left idle for a number of years. There is every reason to believe that the synergy of the two redeveloped sites bordering the Hendricks Avenue railroad crossing can only benefit the remainder of the area – both residential and commercial. The brewery taproom will provide a new complimentary night time destination in an area of Jacksonville already known for its outstanding restaurants and shops.

Metro Jacksonville: Where can we go to get updates and additional information on Aardwolf Brewing Company?

Preben: The Aardwolf website (under reconstruction) will be one source of information. We also intend to set up a Facebook Page.

Metro Jacksonville: How difficult was it to find small business financing in this market? Any advice for those seeking startup capital?

Michael: In all probability, acquiring startup capital from conventional sources – at this point in time – for this type of venture is not highly probable.

We were fortunate to have found private funding so that hurdle at least is one we were able to avoid.
Interview by Ennis Davis