Arrested: Your rights, your responsibilities

Have a talk with your children about police encounters

JACKSONVILLE, Fla. – Sean Bussey is an impressive fifth grader. He's already working on his growing wall of fame and thinking about his bright future, all while enjoying just being a kid.

The reality is kids grow up fast, and with age, comes responsibility.

"It's still important for him to know, even though he's young, there are more and more young people getting stopped and having to be in situations where they're confronted by police officers. I want to make sure that's he's as safe as he can be," said Sean's mom, Niesha Howard.

Sean hasn't talked with his mom about the recent police shootings, like in Cleveland where 12-year-old Tamir Rice was shot and killed by police in a park because officers thought the toy gun he was holding was real. He didn't talk to her about the case in Ferguson, Missouri, where Michael Brown was shot and killed after a struggle with an officer in the street. Sean had no idea about the case in South Carolina where a driver was asked by police to show his ID but when he reached for his wallet was shot. But he has talked with his friends.

"Don't under any circumstances get into an argument with police because that's bad they can shoot you," Sean explained.

Howard did a double take and asked her son to repeat himself. Sean went on to explain that he believes police can shoot you if you get mad. This confirmed Howard's instinct that she needs to have a conversation with Sean about what he should do if he ever has a police encounter himself. Howard did her research and found a poster: 10 Rules of Survival if Stopped by the Police.

"Rule No. 1: Be polite and respectful when stopped by the police keep your mouth closed," read Sean.

One by one Sean goes over each rule with his mom.

"No sudden moments and keep hands out of your pockets. What if you're nervous and you start shaking?" asked Sean.

His mom explained, "They could see that if you're talking to the police and they stop you. They could see that as you being threatening. Even if you are nervous it's best to keep your hands out of pocket put them to the side put them in front of you but you want to make sure that they can see your hands."

She stops at rule number seven which reads says do not run even if you're afraid.

"You're almost, 11 you might think it's funny to run away," Howard told Sean.

He replied, "What, not with the police?"

Then Sean questions this rule: Even if you believe that you're innocent, don't resist arrest.

His mom explains that even if you're innocent, you keep your mouth shut until they call your parents. You still go with them because you could get into more trouble by resisting arrest.

These are 10 rules Howard feels are important to talk about and Sean seems to understand why they are so important.

"All I know use my manners and do anything that I can do not to get myself hurt," said Sean.

Howard didn't want Sean to be scared of police, but she wanted him to understand what could happen and his responsibility in having a safe outcome.

So we asked News4Jax crime and safety analyst Gil Smith, who was with the Jacksonville Sheriff's Office for more than 25 years, to come give Sean a police officer's perspective. This was Sean's first police encounter and his mom hopes it will be his last. Sean had some serious questions.

Sean asked Smith, "Say somebody killed someone or tried to kill police, does that give police the right to kill that person?"

Smith tells Sean that police do have the right to use deadly force if they feel like their lives are in danger or if that person is about to harm someone else with deadly force. Smith went on to explain that officers use it as a last resort.

"Police officers don't wake up in the morning and say 'I think I'm going to kill someone today. I hope I get into a situation where I get to shoot someone.' Police officers just don't think that way," said Smith.

WATCH: The conversation between a mom and her son

Sean has already learned behavior that might seem innocent to him, but could be looked at as threatening to an officer.

Smith asked Sean, "If you have your hands in your pockets why do you think it could be bothersome to police?

"You could have a weapon or gun," answered Sean.

Gil told him: "Sometimes people put their hands in their pocket to get a weapon out police officers are going to be very defensive because they come in contact with people who sometimes want to hurt them."

For the most part Smith agreed with the 10 Rules of Survival on the poster  but he also said it's important for children and adults to have a positive experience or, if possible, a relationship with police. Years ago a police encounter changed his own life.

But he goes on to explain that once he moved into an apartment complex with officers nearby, his point of view changed.

"Just by talking with them them and them talking to me explaining things to me going on ride-alongs I had a different understanding. It still exists that people are treated unfairly but at least with that relationship I had an understanding of police officers and police culture and that's why I was saying before it so important for kids to have some idea about police work and some relationship with police officers," explained Smith.

He told Sean this list is a good guide to follow and it works when everyone plays by the rules: both civilians and officers. 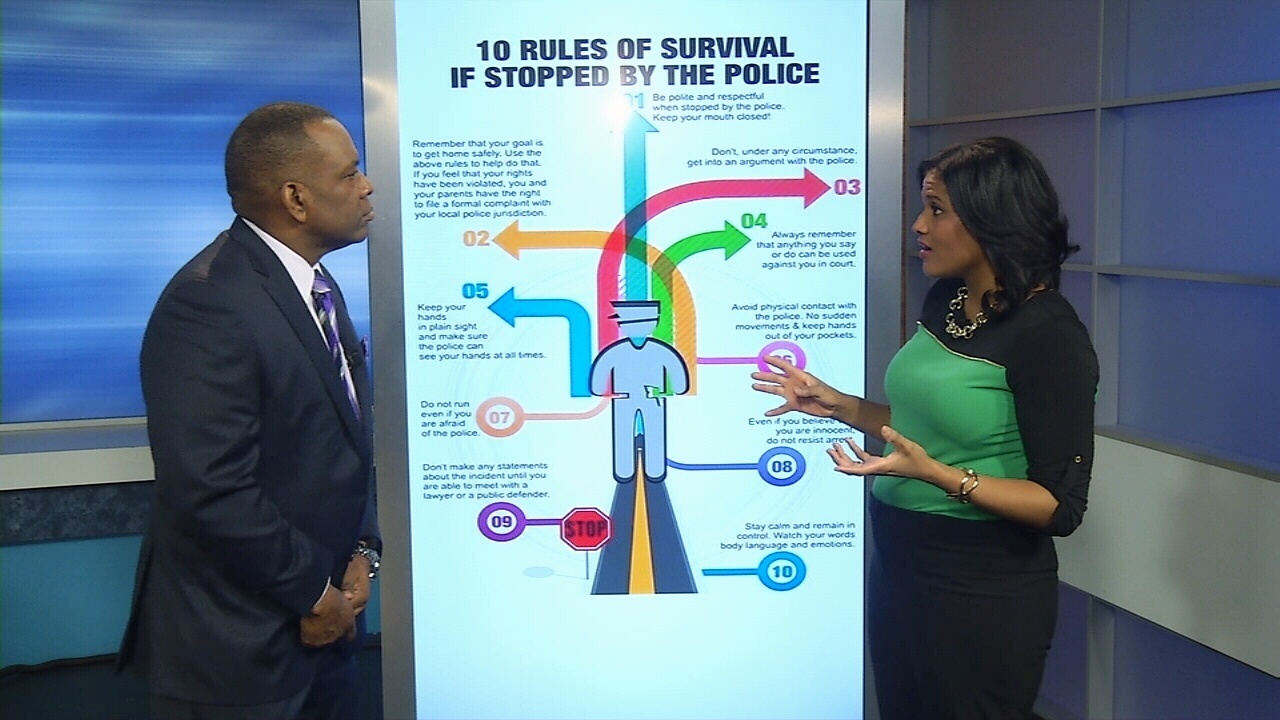 Anchor on The Morning Show team and reporter specializing on health issues.