In his final days, Ahmaud Arbery’s life was at a crossroads

JACKSONVILLE, Fla. – Shameka Delores Grant, the 32-year-old woman who admits to driving a day care van in which a 3-year-old was left for more than six hours bonded out of jail Monday night after being arrested on child neglect charges.

The boy, Hadrian, was hospitalized for a checkup after being found in the van parked outside the center on North Main Street, across from Andrew Jackson High School.

"We got him out. He was hugging me and I was hugging him.  I'm just thanking God he was still alive," the boy's mother, Jalisa Youngblood, said.

He was home Tuesday recovering.

News4Jax learned that Grant has at least 22 traffic violations in Duval County since 2002, including two for driving on a suspended license. A check with Florida's Department of Highway Safety showed her license was valid at the time of her arrest.

The Florida Department of Children and Families, the agency that licenses day care centers, has "strongly suggested" that Grant not be allowed to work at the center.

Grant (pictured in Jacksonville Sheriff's Office booking photo) stood before a judge in shackles Monday to learn her bond.

"I think her bail is very high," said her father, Richard Buckholtz, who is also co-owner of First Coast Young Stars. "She has never been to jail before in her life. So I think a judgment a little bit hard on her for $100,000 bond."

Buckholtz added that he is glad the boy is OK, knowing it could have been much worse.

"We thank God it was overcast like it was outside," Buckholtz added, saying it was just mistake. "Everybody should be held accountable for their mistakes, but it wasn't like she did it on purpose. So I am going to stand behind her. It is my daughter."

Youngblood said her son was in the parked day care van from when it arrived at the center in the morning until she stopped by the day care about 2 p.m. and didn't see her son napping with the other children.

"We looked at all the children that was laying down. And I asked the day care driver, where was Hadrian, and she said, ‘He should be in there somewhere.'  So we double-checked, and he wasn't in there, so my mind just told me to go look in the van," Youngblood said.

Youngblood said that was what the day care director thought, as well, and they both responded.

"We went to look in the van, and I saw he was sitting in the same seat that we put him in this morning.  He was scratching and disoriented.  We went in the day care van, and I grabbed him out," Youngblood said.

According to a release from Jacksonville Sheriff's Office, Grant picked the child up from his home around 7:30 a.m. Monday, securing him in a car seat in the second row of the van.  Grant then dropped off other students at various schools before arriving at the day care facility around 8 a.m.

Grant and other employees removed other children from the van but forgot the 3-year-old and left him strapped in his car seat in the van without air conditioning, food, water or supervision.

DCF spokesman John Harrell said that the center was already operating under a probationary license stemming from previous issues related to transportation and supervision. On July 7, the center was given six months to fix the issues or its license would be revoked.

"It is an incident that we're taking very seriously as far as we're hearing," Harrell said. "Bottom line is this: There is no excuse to leave a child unattended in a vehicle at any time. That applies to parents. That applies to child care facilities.  It is inhumane. It's potentially deadly."

The boy's father said he is glad that the day care worker responsible is being held accountable. He added that he always suspected that they were transporting too many children in that van and said Grant often was on her cellphone while driving.

Santo Mack, the toddler's grandmother, thinks it's a miracle that something worse didn't happen, especially after hearing similar stories of children left in cars who haven't been so lucky.

According to a study from San Jose State University, 23 children left in vehicles have died in the United States so far this year. 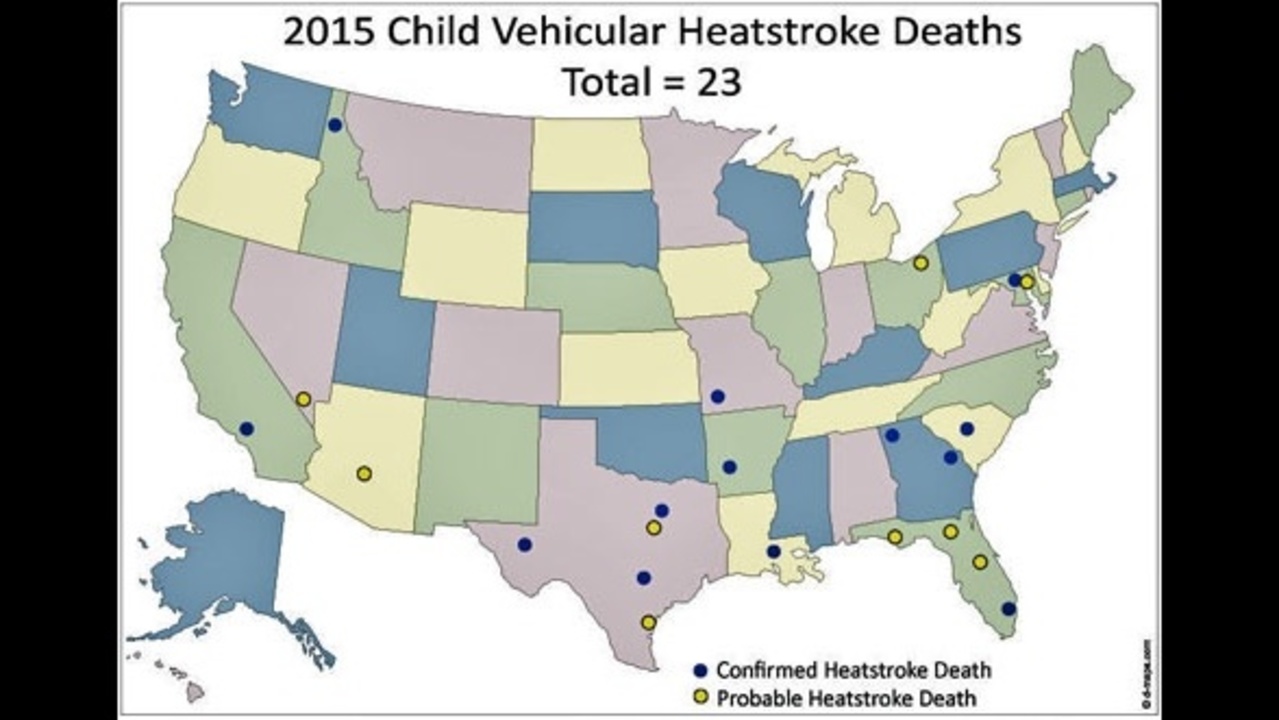 Even if the temperature's only 80 degrees outside, within one hour the inside of a car or van can get to 123 degrees. Four of those deaths were in Florida: A 6-month-old in Deltona, Florida, last week, an 11-month-old in Lauderhill, Florida in July, an 18-month-old in Hilard Park, Florida, in June, and a 16-month old in Lake City, Florida in May.

"Too many children die from being left in the car, when the adult, all they've got to do is just take their time, check and make sure every child is off the day care van," Hodge said.