Firefighters injured in blast while battling fire aboard cargo ship

JACKSONVILLE, Fla. – The death of a 22-month-old boy sparked a community meeting led by Sheriff Mike Williams and Mayor Lenny Curry and a renewed push to put an end to violence in Jacksonville.

Four people were shot to death in drive-by shootings in the past week alone, prompting city leaders to make changes.

The Jacksonville Sheriff's Office said 22-month-old Aiden McClendon was killed as a result of gang violence and was not the intended target. The toddler is the 13th person murdered so far in 2016.

The boy was with his mother and grandmother in a vehicle parked in front of a house on Spearing Street on the Eastside late Friday night, when someone drove by and sprayed bullets, leaving Aiden critically injured. He died Saturday morning.

"We will find out who's responsible for this and we will bring them to justice. That's a promise," Williams said.

Curry said he met with his staff Saturday morning and believes they have $1 million in the budget they can allocate right now to JSO to help with overtime. Williams said that equates to approximately 30,000 man hours.

"These are our children. These are Jacksonville's children," Curry said. "Anyone who thinks they can go around spraying bullets, we are determined to come after you."

Bishop John Guns with Operation Save Our Sons announced a vigil will be held Monday from 7-8 p.m. at Bethel Baptist Church.

"This is not simply a governmental issue or a law enforcement issue, this is a community issue," Guns said. “You cannot legislate love, nor respect for life, nor value for life. You can’t legislate it; that’s not policy. And so as the faith community and the community at large, we're going to elevate the message to an ethic of love and respect and value for life."

Within hours, dozens of community leaders from all platforms came together for one purpose: stop the violence. Law enforcement and city leaders said it's going to take time and resources to get the job done.

Curry is requesting support from the city.

"We are going to ask the city council to take a half-million dollars out of Jacksonville Journey and allocate it so the Sheriff's Office can use it for overtime," Curry said.

Curry said it’s going to take a few years to get results, but he and community leaders are going to do everything in their power to end the senseless killings in Jacksonville.

"I'm going to carve out time and spend time knocking on doors, talking to people, letting them know that we are here, and that we care about them," Curry said.

Business leaders came together Saturday and raised $20,000 for information leading to an arrest in the toddler's killing.

If you know anything that could help police solve the killing of the toddler other other recent murders, call Crime Stoppers at 866-845-TIPS. You can remain anonymous.

Point to dot where name is pointing to read details of each crime. 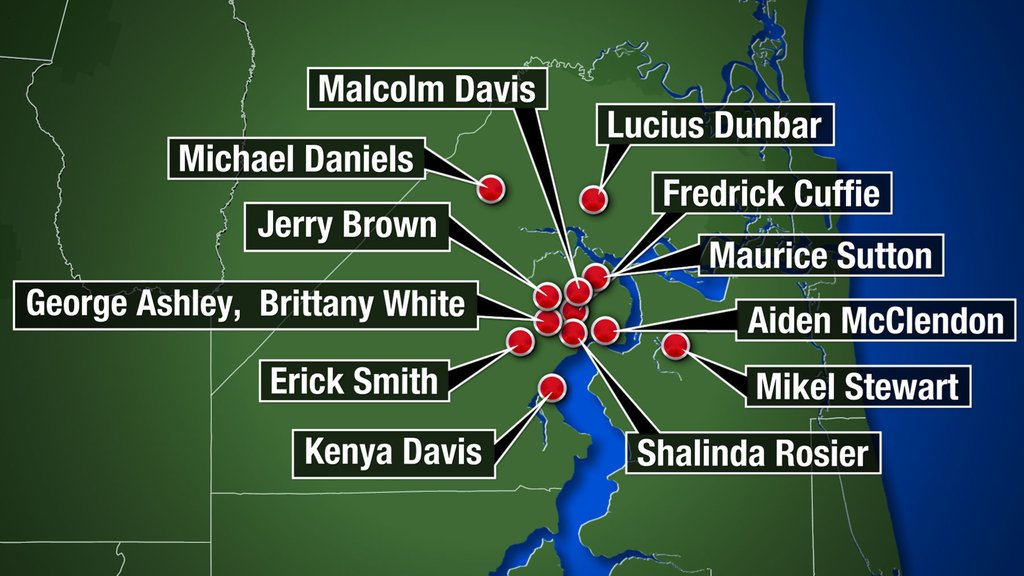