Jacksonville demonstrators bond out, share concerns about treatment by police

JACKSONVILLE, Fla. – Less than halfway into the month of July, 18 people have been killed in Jacksonville and surrounding counties, according to death records compiled by News4Jax.

The alarming number of homicides are under are investigation by law enforcement in Duval, Clay, Nassau, Putnam, Flagler and Ware counties. Some are being investigated as murders, a couple will likely be ruled justifiable. Eight people have been arrested in five of the cases, but no one is in custody in the others.

So far, according to records, there have been eight arrests in five of those cases.

The rash of violence has many people in the community upset and concerned.

According to News4Jax records, these are the reported homicides in our area so far this month:

July 1: Demetrius Robinson and Jennie Lou Hawley are found shot on Dekle Avenue.
July 1: An unidentified man is found dead in a house on Briarcliff Road East.
July 2: Jataren Bethel is stabbed to death; police have charged his girlfriend with the crime.
July 3: Carlton Allen is shot to death in his home; police have charged his son.
July 4: Timothy Rasbeary, 72, is shot to death after he kicks in a door at a home in Yulee.
July 5: Kiana Thomas is murdered in Starke, and her husband is charged by police.
July 6: Johnnie Carter, 15, is shot to death in his Lake Shore neighborhood.
July 7: Robert Massey, 59, and his niece Amy Hatfield, 32, are found murdered in his home on the Southside.
July 8: Tania Woodrum, 66, is shot to death by her husband, who then commits suicide
July 9: Rory Haywood is shot to death in his home in Palatka, and a Jacksonville man is arrested in the case.
July 9: Adam Noel is found beaten to death in his home in Waycross, Georgia
July 10: Kolton Shearer, 18, is fatally shot outside a home in Green Cove Springs; four suspects have been arrested in the case.
July 11: Markus Tanner is shot to death on Carder Street in Jacksonville.
July 12: Cameron Hendrix, 25, is shot and killed across from a mobile home park on West Beaver Street
July 12: Kenneth Hawkins, 61, is found dead in his driveway on Biscayne Lake Drive.
July 13: An unidentified armed home invasion suspect is shot to death by Palm Coast resident.

Point to incident to get details 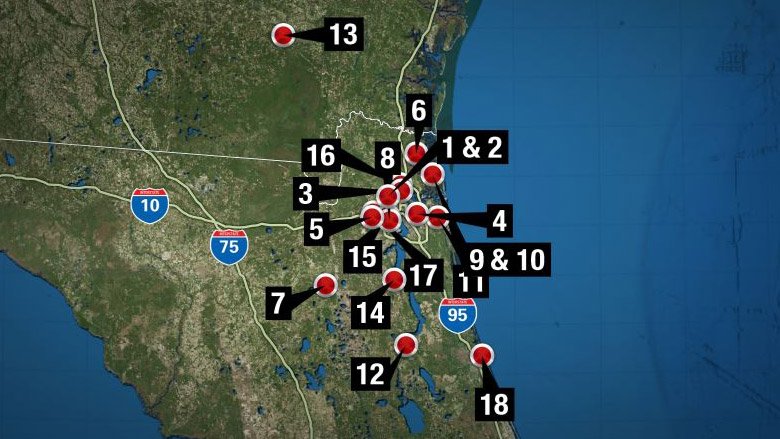 On Wednesday, Beverly McClain, who founded Families of Slain Children and knows the pain of losing a loved one violently, was adding more names to the memorial wall for crime victims that her organization maintains.

She knows many of their stories well, including that of 13-year-old Titania Mitchell, who was shot and killed in April 2013.

"Her birthday was yesterday," McClain said. "She's not even here to celebrate."

The name of McClain's son, Andre Johnson, is also on the wall. He was 28 when he was killed in June 2005. His killer was never caught.

"Does someone have an answer? A remedy? A recipe? Where does this end?" McClain said.

"They’re not all committed in the same way. Some could be gang related, drug related. Some are domesticated. Some of them ... they are just drive-bys, or road rage," Smith said. "We can’t just pinpoint one thing that needs to be done."