Final round of El Faro hearings under way

JACKSONVILLE, Fla. – The inquiry into the sinking of the Jacksonville-based freight ship El Faro and loss of 33 crew members begins a final chapter Monday as two weeks of a Coast Guard Marine Board begin at the Prime Osborn Convention Center.

The 790-foot El Faro sank on Oct. 1, 2015 after losing propulsion in a hurricane while traveling from Jacksonville to Puerto Rico.

Testimony Monday focused on the safety culture of the ship. Capt. Raymond Thompson, a former chief mate on the El Faro, testified Monday that he was not sure if life jackets were stored on the bridge as required.

Voice and data recordings released in December by the National Transportation Safety Board revealed some of what the crew was talking about in the hours before the ship sank.

Families of the victims who have attended the previous hearings, this one is different as the information from the audio recording provided some answers, but not all.

"You can’t imagine the terror these people had to face," said Glen Jackson, whose brother Jack, died with the rest of the crew. "To paraphrase someone else, 'It’s reading a suspense novel when you already know the horrible ending.'"

The National Transportation Safety Board said that investigators were able to recover 26 hours of audio recordings, painting a clearer picture of the ship’s last moments above the ocean’s surface.

Jackson's brother was a helmsman on the bridge during the 8 p.m. to midnight watch with the 3rd Mate Jeremie Riehm. In the transcript, Riehm said on its current course, the ship will come about 25 miles from the center of Hurricane Joaquin. Jackson responded, "Don’t tell me any more, I don’t even want to hear it.”

"He was a former quartermaster in the Navy, so he knew exactly as they were plotting out the course what sort of trouble they were about to anticipate" Jackson said. "He was preparing to get off his watch; he was preparing for the worst. And I am certain that the located, unidentified remains were my brother."

Local maritime attorney Rod Sullivan said there's still a lot to learn from the findings, including some of the most important details to families.

"The one issue they are not covering enough of an extent in my opinion is why weren't these 33 crewmembers saved," Sullivan said. "Why didn't they make it into the life raft? Why weren't they in ... their survival suits in order to try and survive the storm?"

Rochelle Hamm, a widow of one of the crew members, spoke with News4Jax about her hopes moving forward.

“It's already been a year, who knows? I'm going to be there until the end and see what the ending is going to be,” Hamm said. “My faith being as strong as it is, I’m still expecting a miracle to come out.” 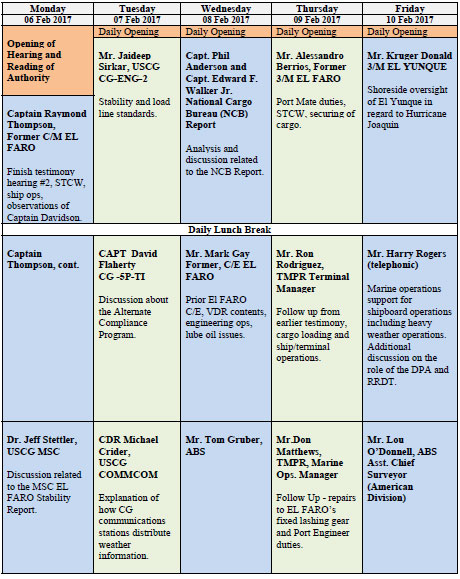 Hamm admitted that following the development of the sinking that claimed her husband’s life has been difficult, but that she has still dedicated time to attend the hearings.

Hamm’s momentum is growing politically. She said she has support from Sens. Bill Nelson and Marco Rubio. Hamm said she has many ideas that she would like see on cargo ships in the near future.

“No ships going out in storms -- just like planes don't go out in snow storms. And not to have the ships over weighed with the cargo. As they're stacking them, the ship is going down and that's an issue,” Hamm said. “I want a Hamm alert alarm on ship that will sound off, and it will not go off until some of the cargo has been removed from the ship. I also want a Hamm alert 1-800 anonymous number for anyone working on these ships and (if) they see dangerous conditions, they can call it in without being fearful of losing their jobs. That's a few things I’ve come up with. That's why I go to the meetings -- I'm listening and watching. I’m building my own list as well.”

If you want to help Hamm in her cause, there’s a petition you can sign on Change.org.

Once these hearings wrap up it will still likely be months before the Coast Guard and NTSB release their full findings.