Could rapid testing prevent spread of coronavirus at RNC?

Gov. DeSantis to join US labor secretary at JaxPort today

ST. GEORGE, Ga. – Facing another hot, dry day with shifting winds, 725 firefighters worked Wednesday to box in a vast wildfire that spilled out of the Okefenokee Swamp over the weekend and has burned an additional 25 square miles near communities along the Georgia-Florida state line since Saturday.

Due to extreme fire conditions Wednesday, the fire made a push west of St. George, south of Highway 94 and north of Road 8 between the two fingers of the fire, according to fire managers.

As of Wednesday evening, the West Mims Fire had burned 225 square miles since it was started April 6 by a lightning strike The fire is burning within a few miles of the small towns of St. George and Moniac in southeast Georgia, which were evacuated on Sunday.

"Residents are asked to take the evacuation order seriously and leave the area, particularly those in the St. George to “Georgia Bend” to Moniac area south of Highway 94," fire managers wrote in Wednesday's fire update.

Planes and helicopters were dropping water and chemical fire retardant on the flames Wednesday as ground crews fortified fire breaks plowed alongside roads to the south and east of the advancing fire, said Susan Heisey, a spokeswoman for the multi-agency fire command team. She said milder than expected fire growth Tuesday gave firefighters extra time to try to box in the fire.

"Hopefully it will help tremendously," said Heisey, chief ranger for the Okefenokee refuge. "But we still are in drought conditions with extreme heat and really low humidity. The potential is really high today for fire growth."

Fire officials said in a news release they consider the blaze 12 percent contained. They have estimated the fire could burn into November.

Heisey said no homes had burned as of Wednesday morning and no injuries had been reported from the fire. While officials in surrounding Charlton County have urged residents nearest the fire to leave, many have stayed in hopes of protecting their homes.

Rejoining the fight Wednesday was a modified DC-10 jetliner capable of dumping 11,600 gallons of retardant chemicals -- roughly four times the amount of any other firefighting plane. Taking off from Chattanooga, Tennessee, the giant air tanker made its first drop Tuesday, but a planned second run was scrapped because of heavy smoke.

Charlton County residents who had already evacuated and Nassau County residents preparing to do so had a chance to ask questions at a public meeting Wednesday night at Baker County High School in Glen St. Mary.

The biggest question asked was, "How close will the fire get to my home?"

Michael Lusk, the refuge manager for the Okefenokee National Wildfire Refuge, said that with the area being so dry, it really depends on the winds.

"None of us can say for sure how far it's going to go," Lusk said.

Raymond Martinez and his son, who are just two of the hundreds of people who have already evacuated, were concerned after learning how close the flames were to reaching their home.

"From what he showed us, it's like three minutes from my house," Martinez said. "I don't want to lose my home."

According to fire officials, there's a few issues that they're monitoring closely: Aircraft and ground crews continue to maintain and reinforce fire lines as they prepare for the shifting winds, reburning from dead pine needles falling into the fire continues to be a problem for crews, and there's also a possibility that there will be lingering smoke that could affect the tankers that have been brought in.

"The fire crews that are out there now have laid out a very solid line beneath the fire," Lusk said. "They have built a wall for that fire to hit and we hope we've hemmed it in. We can't say for sure, but we think that, hopefully, it won't go any further."

Officials also gave the dozens of attendees an action plan: Be ready and prepared before the threat of the wildfire, get set and have situational awareness when a fire begins, and then go and leave the home.

With the massive fire spreading toward populated areas, the Federal Emergency Management Agency has authorized federal funds to help pay for the effort. 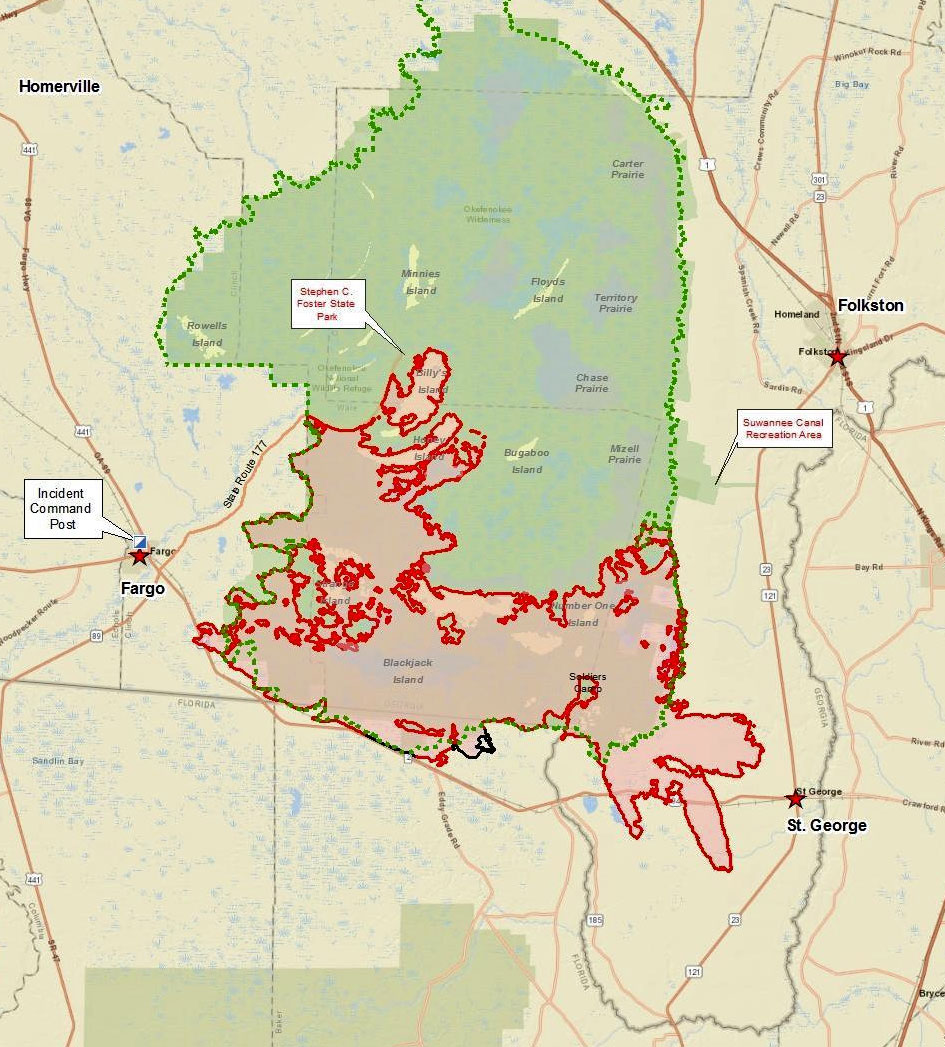 Jessica Boldin and her family evacuated 15 horses, six dogs and other animals from their Charlton County ranch as the vast wildfire emerging from the Okefenokee Swamp blackened trees behind their home.

Boldin said her family wasn't ready to leave yet, though the entire community was under a mandatory evacuation order.

"We don't budge off our property very easy," Boldin said Monday afternoon. "If it's down on top of us, we're ready to leave. We're not going to burn down with the house. But we're staying until it's on our behinds."

Many in the community of about 2,000 near the Georgia-Florida state line stuck around Monday in spite of the evacuation order, not yet ready to leave everything to the mercy of the approaching flames.

"That's a worry every day, especially when you were going to have the variable winds and shifting winds," said Tom Stokesberry, a spokesman for the multi-agency team battling the fire. "I definitely know our lines will be tested, especially on the east side when those winds shift to west-southwest. But we have had firefighters in there for days shoring up those lines, putting out those hot spots."

Emergency officials in south Georgia's Charlton County ordered a mandatory evacuation Sunday for all of St. George and for nearby Moniac, small rural communities on the southeastern edge of the Okefenokee Swamp.

Local schools were closed Monday because of the blaze and a shelter was opened at a recreation center farther away.

Charlton County schools reopen Tuesday except for St. George Elementary School, which will be closed for the remainder of the week as it is used as a staging facility for firefighters.

HOW YOU CAN HELP: Donations for firefighters

Students who attend Charlton County High School and Bethune Middle School who live in the St. George attendance area will be excused from school. School transportation will not be provided south of Ruth Petty Road.

The shelter for St. George evacuees was moved Sunday from St. George Elementary School to the Camden County Recreation Center at 1050 Wildcat Drive in Kingsland. The Red Cross has enough cots and supplies to take care of 300 people, but there are currently no evacuees in the shelter.

Sixth Street Veterinary Hospital in Macclenny has offered to temporarily house cats and dogs displaced by the fire. For more information, click here.

Heisey said there was no way to know how long the evacuation order would stand.

Fire officials said it will take tropical rains -- perhaps a named storm passing over the area -- to get the fire completely contained. That might not happen until the fall.

Burn bans are in effect in Camden and Charlton counties in Georgia, as well as Baker, Bradford, Clay, Nassau, Putnam, St. Johns, Flagler and Alachua counties in Florida. Outdoor burning without a permit is never allowed in Duval County.

Burn bans restrict all residential outdoor burning of leaves and yard debris, fireworks of any kind, campfires, flares and other outdoor burning devices. Cooking fires within a barbecue or hibachi grill, or other similar devices specifically intended for cooking, are permitted.

More than 700 firefighters and support personnel from across Georgia, Florida, 34 other states, the District of Columbia and Puerto Rico were fighting the fire. Helicopters dumping water and tanker planes spraying fire retardant managed to keep the fire from spreading to homes in St. George over the weekend. Firefighters with tractor plows worked to carve a path of bare soil around the town as a barrier to the flames.

The Florida National Guard told News4Jax it has a Blackhawk helicopter in Brooksville on standby to help battle wildfires and ground troops are on standby across the state.

Fire managers will hold another public meeting at 6 p.m. Thursday at the Charlton County Annex, located at 68 Kingsland Drive in Folkston, Georgia.