After thousands flock to St. Johns County beaches, officials decide to shut them down

Distillery lends a hand - sanitizer - in battle against coronavirus

St. George students back to class as fire rages nearby

ST. GEORGE, Ga. – Two days after the mandatory evacuation order for the towns of St. George and Moniac on the rim of the Okefenokee National Wildlife Refuge were lifted, students returned to St. George Elementary School for the first time in a week.

This comes after nearly 2 inches of rain fell on Saturday on the fire that has consumed 152,147 acres -- nearly 248 square miles -- over the last six weeks.

Rain and thunder storms are a mixed blessing on fires. Yesterday's storms brought as much as 2.5 inches of rain on parts of this fire. What welcome relief for firefighters and local communities, though temporary. The evacuation orders have been lifted and roads have been reopened. However, during those thunderstorms, roughly 300 lightning strikes occurred within the refuge area alone (1800 in the entire storm area). Remember, #WestMimsFire was caused by a lightning strike. The hot and dry conditions are not over. The drought conditions are severe and long-term. It will take "named rain" (a tropical storm or hurricane) before this fire is not a threat to south Georgia. But, the are thankful for a bit of respite amidst "the storm."​

Tom Stokesberry, with the U.S Forestry Service, said more rain fell on the fire than expected and the containment lines on the eastern side of the fire are holding up well. All nearby roads have since reopened except for those inside the refuge.

"The rains did give us an opportunity to get ahead of this fire, and we want to stay there," Stokesberry said.

As of Monday afternoon, the fire was 17 percent contained. There were currently 895 people, 11 helicopters, three fixed-wing air tankers, 100 wildland fire engines and 68 bulldozers fighting the fire.

Over the past five weeks, efforts to fight the fire have cost more than $25,000.

With dry conditions and heavy winds, the pine needles in areas that have already burned can re-ignite. Water is being pumped through six miles of hose that can carry 3,000 gallons of water through the park for the firefighters to use. 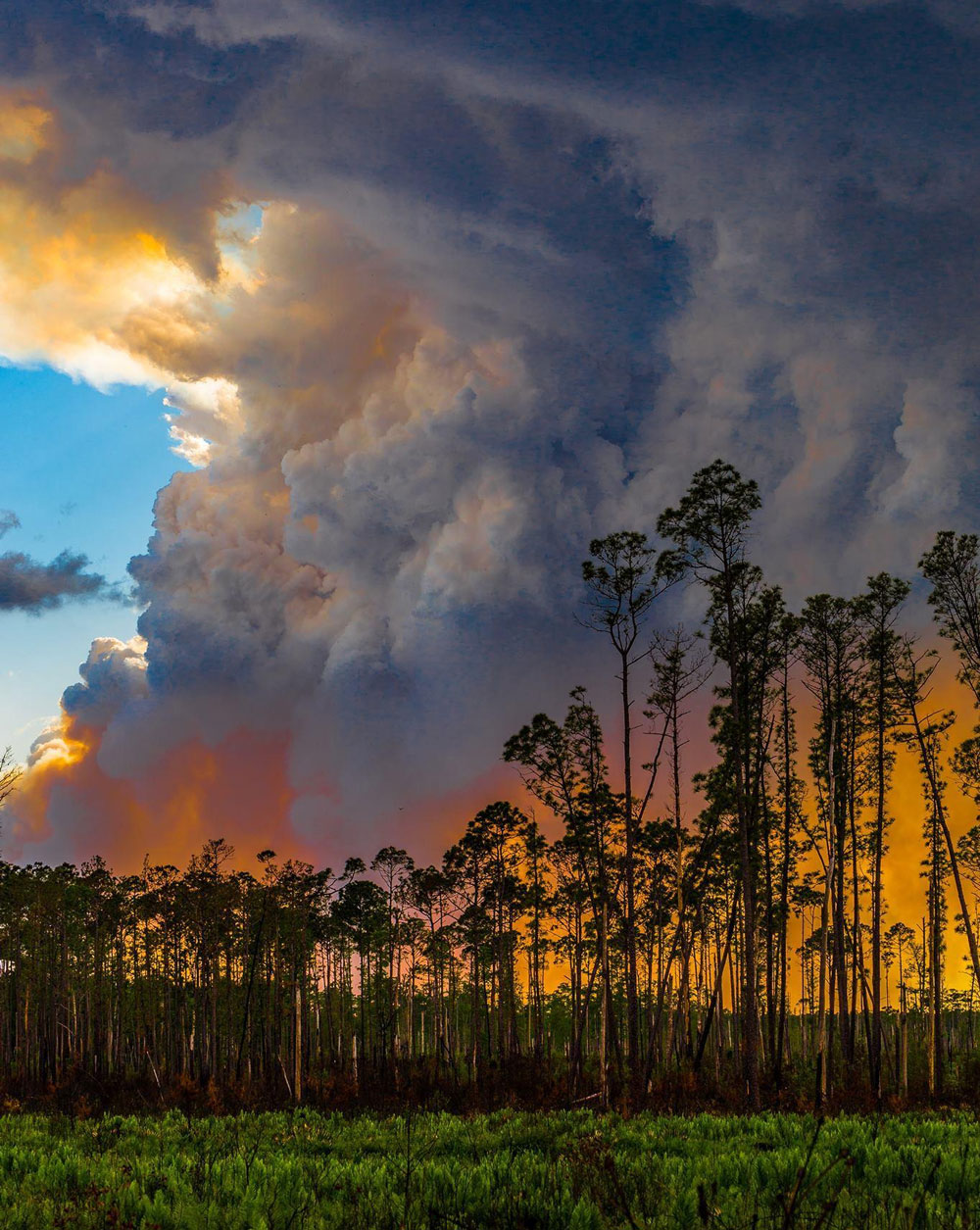 "It's like a great big football team. We get together and everyone helps and cooperates," said Mark Clay, a firefighter from North Mississippi. "Teamwork makes the dream work."

Inside the perimeter of the Charlton County fire, the media was shown two buildings that were destroyed last week by the flames, which at points leaped 100 feet in the air and jumped Highway 94. One of those buildings was a Georgia Forestry office that fire crews were using as a staging area. Firefighters had about 30 minutes to get themselves and their equipment out.

Fire managers believe the fire could burn into the fall, after months of tropical rain or at least one named storm passes over the area.

Firefighters said their biggest challenge is the dry conditions, but it's also hard to stay cool with the heavy protective gear they have to wear in the heat. Crews are on a two to three rotation, and some were just beginning their shift Friday, which means they will miss out on spending time with their loved ones on Mother's Day.

"I've got a mother and a wife and a mother-in-law -- (I'm) wishing them all three of them a Happy Mother's Day this Sunday. I'll give them a rose and a vase when I get back," Clay said.

Burn bans remain in effect in Camden, Charlton and Glynn counties in Georgia, as well as Baker, Bradford, Clay, Nassau, Putnam, St. Johns, Flagler and Alachua counties in Florida. Outdoor burning without a permit is never allowed in Duval County, and on Thursday, Mayor Lenny Curry extended the ban to include campfires and bonfires.

Burn bans restrict all residential outdoor burning of leaves and yard debris, fireworks of any kind, campfires, flares and other outdoor burning devices. Cooking fires within a barbecue, hibachi grill or other similar devices specifically intended for cooking, are permitted.