Trial court must reevaluate whether Matthew Hinson's plea was coerced

JACKSONVILLE, Fla. – A man found guilty of killing a Chicago Bears fan in downtown Jacksonville in 2012 will have his conviction of second-degree murder reviewed, Florida's First District Court of Appeals ruled Wednesday.

Matthew Hinson was servicing a life sentence for killing William “Chris” Pettry, a Bears who was in town to watch his team play the Jacksonville Jaguars.

Police said Hinson slashed Pettry's throat in a fit of rage at Fionn MacCool's restaurant at the Jacksonville Landing because Pettry was talking to Hinson's wife. Pettry, 42, was in town for the Bears' game against the Jaguars.

Detectives say Hinson, who worked at the Hyatt Regency Jacksonville Riverfront next door, put the pocket knife back in his pocket after attacking Pettry and fled in his truck, but was caught a short distance away.

Hinson testified at his 2013 sentencing hearing that he takes full responsibility for slitting Pettry's throat in the restaurant and was drunk at the time.

"Obviously I was very inebriated and made a terrible judgment call," he told the jury "It was not my intention to kill this man."

An expert witness for the defense testified that Hinson suffered from Post-Traumatic Stress Disorder after his time on a submarine in the Navy. The defense said PTSD was the reason why Hinson killed Pettry. Hinson claimed he was “black out drunk” at the Jacksonville Landing the night he killed Pettry. 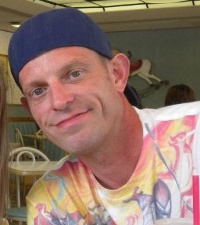 Hinson said he didn't know why he would kill Pettry. He said he doesn't remember any kind of argument. He just said someone grabbed him and he pulled out his knife.

"No matter how many times you say, 'I'm sorry,' there are three children that will grow up without a father," prosecutor Jeffrey Moody said to Hinson.

Defense attorneys said at the time Hinson had a problem with alcoholism and PTSD after serving in the Navy, and claimed he did not know what he was doing. Prosecutors pointed to an interrogation video that showed Hinson confessing to the crime, telling investigators he killed many before in battle.

“Using PTSD and serving your country as an excuse,” said Veronica Pettry. “I was former Chicago police sergeant and I never used that as an excuse to take somebody else’s life.”