Tropical low over Georgia will bring on more rains

Drainage project to alleviate flooding along A1A in Jacksonville Beach

JACKSONVILLE BEACH, Fla. – A meeting was held late Thursday afternoon to discuss a solution to flooding in Jacksonville Beach that occurs during heaving storms.

This month, the Florida Department of Transportation will begin a drainage improvement project along State Road A1A/Third Street, between Beach Boulevard and Seagate Avenue, to alleviate some of the most flood-prone areas of Jacksonville Beach.

The 2-hour meeting began at 4:30 p.m. at the South Beach Community Center. It was about the project that involves drains along busy A1A. Jacksonville Beach residents were invited to find out how the project will affect them over the next couple of years. 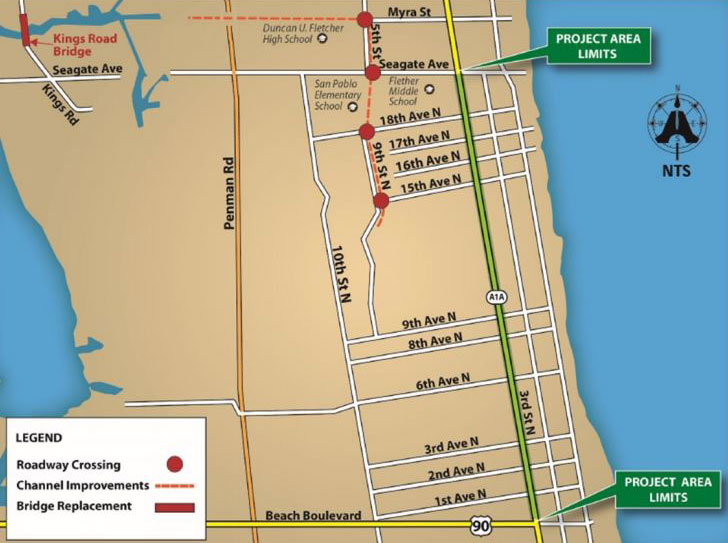 The project will include various road closures over the next few years, but FDOT said the end-product will be well worth it.

Flooding along A1A in Jacksonville Beach has been a problem for decades. With recent the hurricanes, the flooding was even worse.

But outside of hurricanes, just a quick, heavy storm can also bring problems.

Jazelle Handoush, who works at a business along A1A near 17th Avenue North, knows firsthand.

"My very first week here, we had a pretty bad storm and they weren't letting the drains run through," Handoush told News4Jax. "So the rainwater leveled up a few inches and our cars actually got flooded. So it's pretty bad when it rains."

Handoush was thrilled to learn about the drainage improvements that are starting this month.

The project will begin on the Kings Bridge. There will be improvements to both the bridge and the channel, widening each of them to help with the flow of water in the area.

Lloyd Aichibald, who lives in the area, was also very pleased to hear about the project.

"A couple weeks ago, we had a torrential downpour," Aichibald said. "And the water just pours down here and that whole part was flooded -- Third Street."

He and others wish the project would be complete a bit sooner than 2021, but are happy that FDOT said the improvements will be noticed along the way.

The existing drainage system will remain in place until the project is completed, according to FDOT.

Fletcher High School, Fletcher Middle School and San Pablo Elementary are all along Seagate Avenue. The state Department of Transportation said road closures and detours will be necessary, but it will work outside of school hours as often as possible.

FDOT also said it wants to minimize noise as much as possible during the construction project because of how long it will take and because of the three schools in the area. One way it plans to do that is by using noise-reducing equipment, using anti-vibratory methods like pressing instead of hammering and also using whisper pumps.

After the project is completed, FDOT said, there will still be a need for more construction work, but the project will significantly help with draining water in weather events. But it will not be the final step, only the first step