JACKSONVILLE, Fla. – There's a crime alert from the FBI.

Federal agents are warning the public about the "Felony Lane Gang," a group of organized burglary and identity theft rings originating in South Florida and operating throughout the United States.

The group of men and women breaking into cars and stealing money is dubbed the Felony Lane Gang because members disguise themselves as their victims, and take the far lane at a bank drive-through to withdraw large amounts of money, the FBI said.

News4Jax reported on the Felony Lane Gang in 2013 when it was operating in North Florida.

The gang is back again, prompting agents to send a nationwide alert, warning of thieves targeting your personal information and hard-earned money.

News4Jax on Thursday spoke with an FBI agent about how the group operates and preys on women.

"The male leaders will recruit a female, normally a drug user or a prostitute or someone down on their luck -- homeless, transient," FBI Special Agent Steve Fogarty, with the Nashville Office, said by phone.

According to the FBI, members are targeting women parked at fitness centers, parks and day cares; smashing car windows, stealing what's inside; and then assuming their victims' identities, even wearing disguises, such as wigs, and withdrawing money.

"The women typically use the furthest drive-through lane from the teller to commit the transaction to better conceal their identity, in case they didn’t completely match the victim’s driver’s license photograph," Fogarty said. 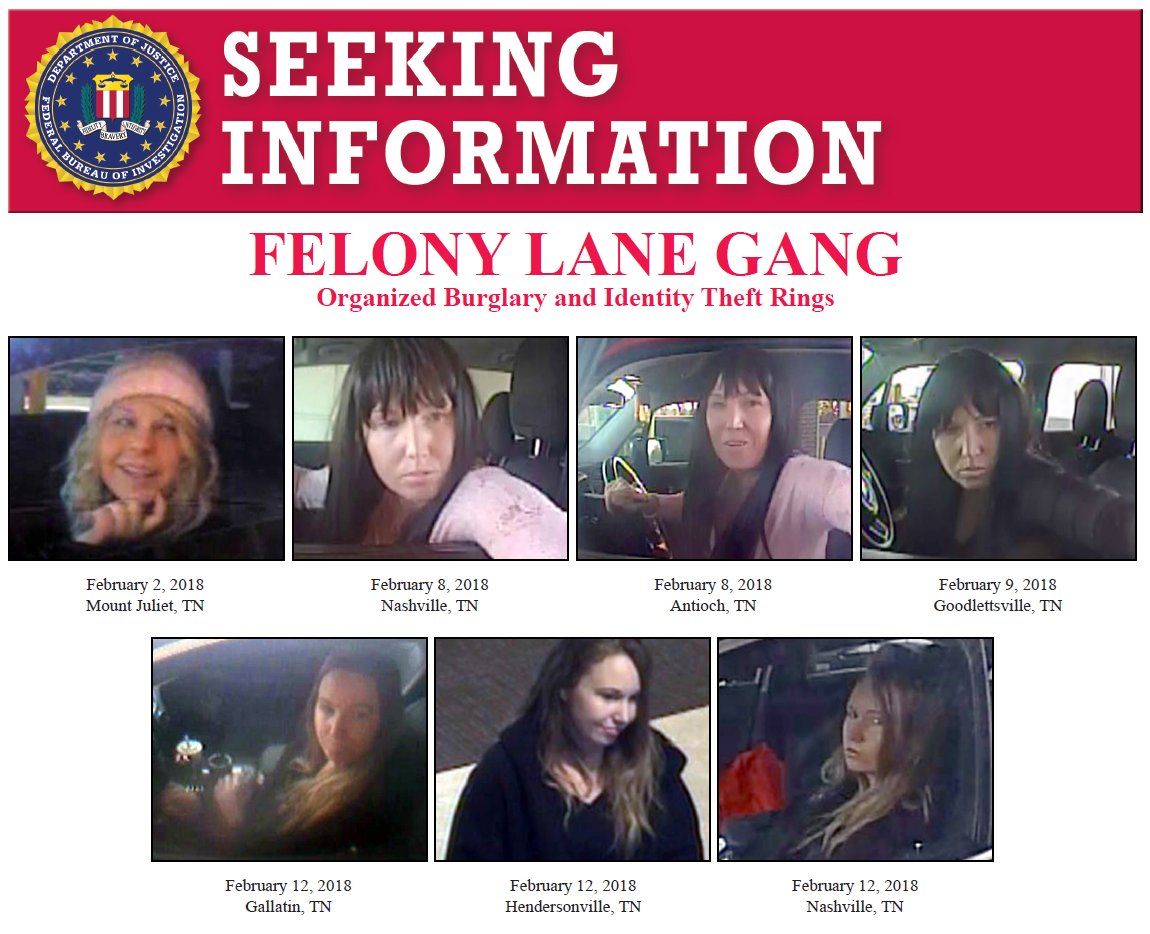 FBI agents in Tennessee are hot on their trail, releasing recent surveillance photos. They said the members have made up to $60,000 in a week.

With the gang's strong ties to South Florida, Jacksonville could be in the crosshair.

"I would say absolutely," Fogarty said. "Coming from Broward, it is a straight shot up (Interstate) 95."

Your wallets and purses can be gold mines for thieves. If somebody steals them, that could cost you thousands of dollars and years of headaches.

"Would you take off a diamond bracelet and leave it lying on the dashboard of your car for anyone to see? Someone's going to steal that," said Deborah McCarley, a retired FBI special agent. "Well, they are stealing just as much, if not more, from you if they are stealing your identity."

McCarley the former FBI agent who was in charge of the Northeast's Florida white collar crime unit, is now part of Risk Confidence Group security consulting. She reminded people to guard their personal belongings because you never know when the crooks will strike.

"You’re still risking a lot if you’re going to leave that personal information in your vehicle," McCarley said.

If you have any information about the Felony Lane Gang, you're asked to call the FBI's Jacksonville Field Office, which covers 40 counties throughout North Florida, at 904-248-7000.