JACKSONVILLE, Fla. – Survivors of a missile attack on the Mayport-based frigate USS Stark 31 years ago gathered with fellow sailors and community members Thursday for a somber remembrance ceremony to honor the 37 lives lost.

"This is needed very much to remember the sacrifice, the love these men have for one-another," said Gunners Mate Missiles 3rd Class Bernard Martin.

Martin had just gotten off his shift aboard the USS Stark on the day of the attack.

"The morning of the attack I traded watches with another fellow and moved him in," Martin said.

The guided missile frigate USS Stark was on patrol in the Arabian Gulf when it was struck by two missiles fired by Iraqi fighter jets, puncturing large holes and starting a fire on board.

Black smoke covered the air. The sailor that took Martin's place was killed in the attack. Martin was on a flight back to base.

"The chief pulled us off the plane and said, 'Stark's been hit.' I was in complete shock, disbelief," said Martin.

Now, Martin makes it his mission to be the voice for his 37 fellow sailors  who died in the line of duty.

"You're not forgotten," said Martin

Thursday is the 31st anniversary of the tragedy is a unique year.  It also represents the hull number of the ship, which is marked on the hats of the survivors. 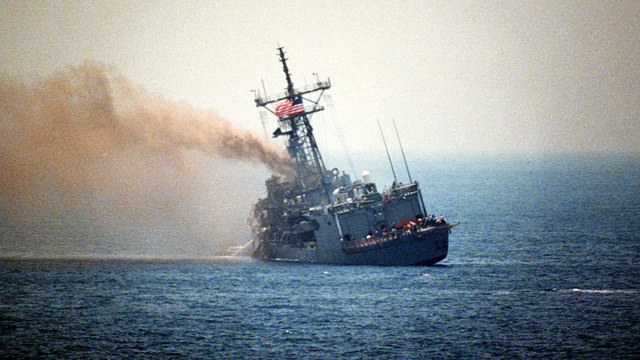 IMAGES: USS Stark memorial service
FROM THE VAULT: May 1987 documentary on missile attack

The USS Stark was decommissioned at Mayport in 1999.

Each year, surviving sailors from the 1987 crew of Stark and family members attend a special memorial service, which features some of the events that occurred following the attack, both aboard the ship and at Naval Station Mayport.

The USS Stark monument was dedicated with the establishment of a memorial park in Mayport on Aug. 1, 1987. By holding the ceremony every year at Mayport Naval Station, they hope to keep the spirit of the men alive.