20-year-old who aspired to teach dies of heart attack

This cordless vacuum has twice the battery runtime of its competitors

ATLANTIC BEACH, Fla. – A man who reported being struck by lightning Monday afternoon was hospitalized, according to the Atlantic Beach Police Department.

The incident happened just before 2:45 p.m. on the beach a couple of blocks south of the 19th Street access. The man told lifeguards he felt the charge go from his head to his foot.

He was conscious when he was transported to Beaches Baptist. There was no immediate word on his condition.

"It was one of the loudest sounds I've ever heard," Jon Collins said. "It was a shockingly loud sound. I don't know (how) anyone who was around it could have survived something like that."

Collins' friend, Preben Olsen, said it looked like the strike hit the water, then branched out near a group of people on their bicycles.

"It was right in front of all the bikers and we saw them running. It looked like someone was staggering. We weren't sure if they got hit," Olsen said.

Abbie Hely, who is on her first day visiting the area from Ireland, said she's a bit nervous now.

"We were out swimming (when) a massive gray cloud came over. Everyone started clearing the beach because we knew ... a storm was coming," Hely said. "My aunt lives here. She did warn us of the thunderstorms." 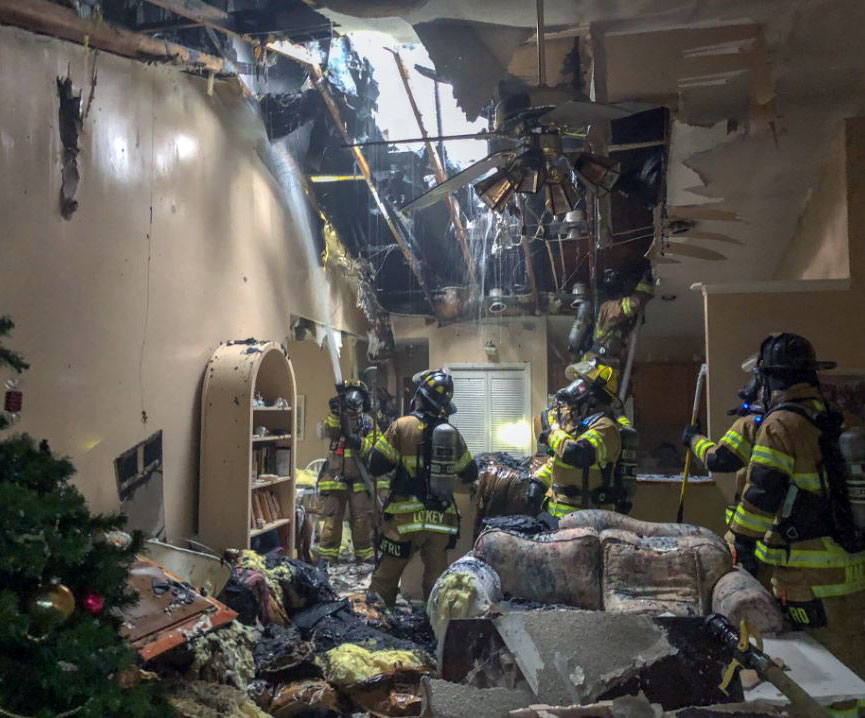 News4Jax meteorologist Rebecca Barry said a small but fast-moving thunderstorm was moving over Atlantic Beach about the time the man was struck.

Atlantic Beach police said lightning from another, larger thunderstorm that passed over the beaches about an hour later caused a fire that burned through the roof of a home on Oceanwalk Drive South (Jacksonville Fire-Rescue photo, right).

The couple who were in the home at the time got out safety and firefighters said there were no other injuries, but about one-third of the attic experienced heavy damage.

Homeowner Lorrie Byrnes told News4Jax that her husband flipped their breakers after the lightning hit their home of 25 years about 4 p.m., but they didn't realize their house had caught fire until 30 minutes later.

"It started getting smokier in the house. (I was) thinking this is kind of strange," Byrnes said. "Then he went out into the garage and opened up the crawl space."

Despite the fire damage, Byrne said, they're hoping they'll be able to salvage their home.

"I’m thinking about how long it will take to fix it, if we can fix it, if it’ll be worth fixing -- I have no idea," she said.

The Byrnes said they will be staying with family in the area until their home can be repaired.

In addition to the bicyclist and the house struck Monday in Atlantic Beach, a woman was killed by a lightning strike in White Springs in April.

In May, a restaurant on Philips Highway in Jacksonville was hit.

In the first 11 days of June, there was a house struck in  St. Johns County, a house hit on Jacksonville's Northside and a garage in Keystone Heights in Clay County over the weekend.