Cloudy and humid with showers for Father’s Day weekend

Simple reminders for children around water

One dead after shooting on Shindler Drive

JACKSONVILLE, Fl – A body has been found during the search for missing Nassau County woman Jennifer Lynn Perry, 38, family confirms to News4Jax.

Nassau County Sheriff Bill Leeper also confirmed the body of a female was found in Charlton County Friday evening, just across the Florida-Georgia line. He could not confirm the identity.

According to deputies in Charlton County, searchers found the body along a side road about 100 yards off Barker Boulevard in St. George.

Saturday the Charlton County Sheriff's Office told News4Jax the Georgia Bureau of Investigations is now in charge of the case. GBI says the body will be sent to the Medical Examiner's office in Savannah on Monday to determine the cause of death and identity.

Perry was reported missing Wednesday after she was last seen about 7:30 p.m. Saturday in Bryceville, according to the Nassau County Sheriff's Office.

Late Thursday evening, a Jacksonville man who was driving Perry's black Ford F-150 was stopped in Macclenny, according to the Baker County Sheriff's Office.

The driver, who deputies identified as Delbert Lamar Goodman, 33, was arrested on charges of misdemeanor possession of marijuana, possession of drug paraphernalia and driving with a suspended license. 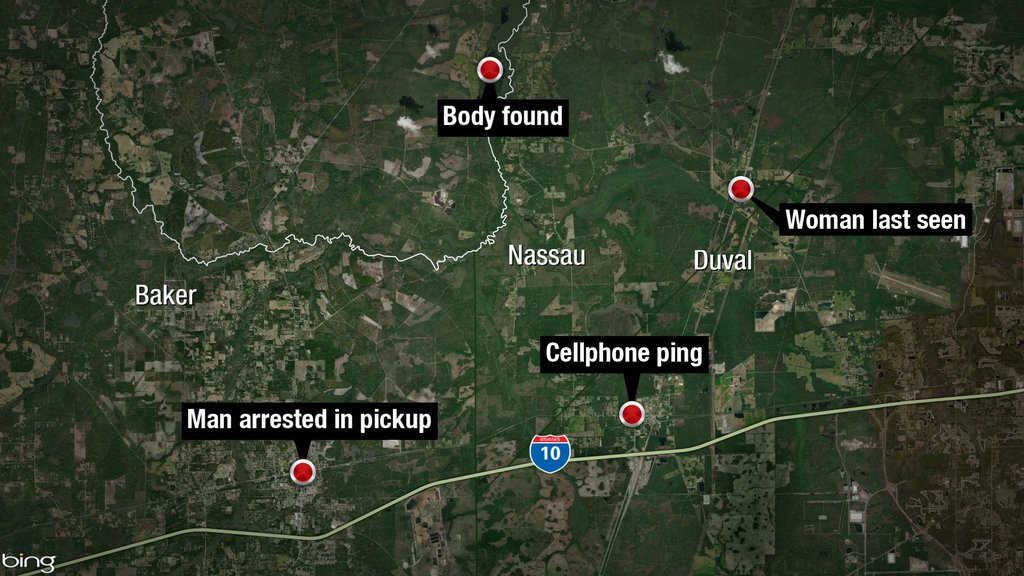 Perry's family said Friday evening, they began their search near a parking lot in Baldwin where they said Goodman was seen by Perry's parents driving Perry's truck Thursday.

"Jennifer would not let anyone drive her truck," said Karon Sherrington, Perry's aunt.

Sherrington said Perry's brother, Justin Perry, went after the truck when it was spotted.

“As we were pulling out that dirt road on State Road 21, my sister’s truck passed me. So, I whipped it around and I chased him (Goodman),” Justin Perry said.

He called 911, and the truck was later stopped by a deputy.

Goodman was detained and is being held on $20,000 bond. Nassau Sheriff Bill Leeper confirmed Goodman and Jennifer Perry know each other, but Goodman was not considered a person of interest. The charges he was arrested on were not related to her disappearance.

According to Duval County court records, Goodman has served four prison sentences for convictions on charges that include carjacking, burglary, cocaine possession and possession of methamphetamine.

Leeper told News4Jax on Friday that there was no sign of foul play at Perry's home.