Darryl Whipple to judge: 'Willing to pay the ultimate price ... why can't I?'

JACKSONVILLE, Fla. – A man accused of setting his girlfriend on fire at a Westside restaurant two years ago wrote a rambling, eight-page letter to the judge about to hear his murder trial in which he appears to ask to be put to death.

Darryl Whipple, 60, is accused of dousing 56-year-old Carol Renee Demmons with flammable liquid and lighting her on fire Oct. 12, 2016, while she was working at a Golden Corral on Memorial Park Road, just off Normandy Boulevard. She died about three weeks later.

Whipple, who is due back in court next month, is facing the death penalty if found guilty, but this letter could delay the process.

Surveillance video from the restaurant appears to show Whipple walk up to Demmons, pour a liquid on her and use a lighter to set her on fire.

Shortly after his arrest, Whipple pleaded not guilty. Nearly two years later, Whipple appears to be asking for the death penalty. 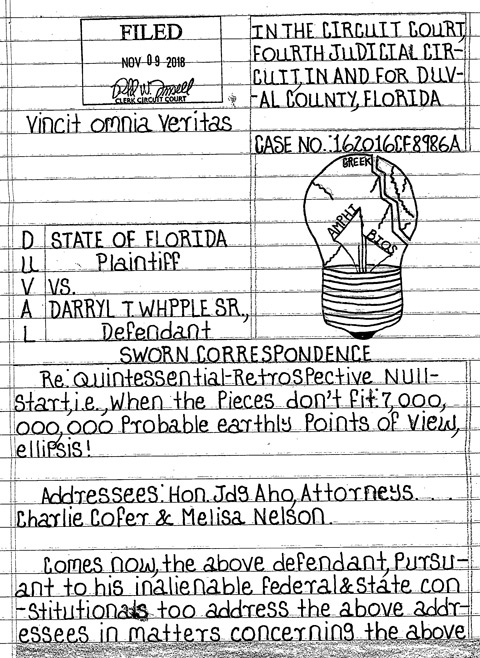 "Like Luke 23:40-43, I accept the imminent three (3) nails," Whipple wrote on page five. Two pages later, he wrote:  "Willing to pay the ultimate price for the indicted offense, why can't I!"

Ten days after the letter was submitted to the court, Aho ordered the state to give Whipple a mental evaluation. What doctors find could prevent him from facing the death penalty.

Attorney Gene Nichols, who is not affiliated with the case, said these words sound like a death wish.

"This is probably what triggered the court, the state and the defense to get this man evaluated," said Nichols, of Nichols and Pina. "As we review this document, what we see in here is that it appears he is asking to be put to death."

The confusing language of the letter could be evidence that Whipple is not mentally stable. It refers to "7,000,000,000 probable earthly points of view." He used the word "maladroit," meaning ineffective or clumsy, throughout.

"Accepting unconditional and uncompromising accountability for (my) maladroits on that fateful day that subsequently in ways un-be-knowing to me directly/indirectly contributed to demise of my companion, Ms. Carol Renee Demmons," Whipple wrote.

Another word he used frequently is “psychosis.”

Nichols said Whipple's mental state, or lack of it, could save his life.

"At this point in time, it does not appear that his competency, whether or not he can even stand (trial) has been evaluated or questioned," Nichols said.

Now, a doctor has to determine what is really going on in Whipple's mind.

News4Jax tried to reach the Demmons family Tuesday, but was unsuccessful.

Whipple is due back in court Dec. 18.