JACKSONVILLE, Fla. – There has been an outpouring of kind words for former President George H.W. Bush after his passing, some of those thoughts coming from leaders who worked with him in Jacksonville and the nation’s capital.

On Monday, former Jacksonville Mayor Tommy Hazouri and retired Admiral Bob Natter reflected on the time they each spent with the 41st president as the nation paid tribute to him for a lifetime of service that began in the Navy during World War II, ended with four years as president and was characterized throughout by what admirers say was decency, generosity and kindness.

Hazouri told News4Jax that he first met then-Vice President Bush in the 1980s, shortly before he was elected.

"He says, 'kinder and gentler nation,' and he was that way. I think he always listened. And he seemed very interested in what you’re saying and what the conversation was," said Hazouri. "I enjoyed meeting him."

"I know what it’s like to be a one-term person -- try and do what you can do," Hazouri said. "But you accomplish a lot, and I think he did whether you agree or disagree with the Gulf War or no new taxes or whatever it might be. But I think what superseded that -- people still like him."

Bush spent a lot of time in Jacksonville, particularly for the Pace Center for Girls in Arlington -- a project both he and his wife, Barbara, were passionate about.

Others worked with the president in Washington, D.C., where retired Admiral Bob Natter served for the Joint Chiefs of Staff during Bush’s term.

"The president was very decisive, very personable. But he was all business when it came to this," Natter said in reference to the decision to go into the Gulf War. 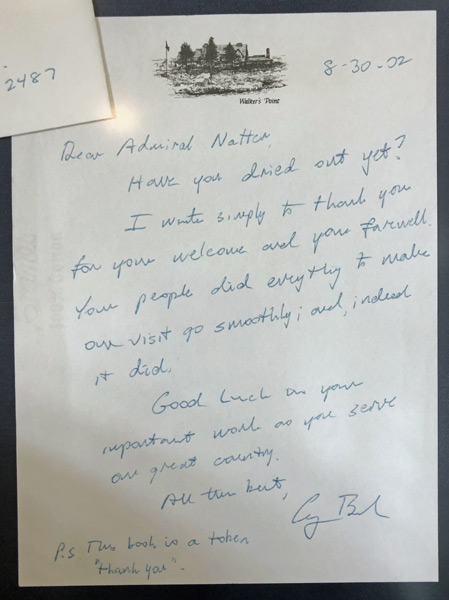 Natter was full of stories about the former president as both a leader and a man.

"A very personable individual, had a great history of handwriting personal notes and thank yous," he said. "I’ve got one written right back there. I’m a nobody."

"Nobody" may be a stretch, as Natter was commanding the Atlantic Fleet when Bush penned the letter that now hangs in his Ponte Vedra home.

In the letter thanking Natter for a ride on an aircraft carrier, Bush wrote, in part, "Have you dried out yet? I write simply to thank you for your welcome and your farewell."

Many of the stories shared told of the kindness of the Bushes. Natter, who lived in the Naval Observatory where Bush lived as vice president under President Ronald Reagan, said Bush was known for his kind gestures to neighbors while Barbara Bush was known to bake cookies for the Secret Service members.

A similar outpouring of kind words and thoughts is anticipated in Washington this week during the state funeral for Bush, who died late Friday at his home in Houston. He was 94.

Bush will lie in state in the U.S. Capitol rotunda for a ceremony and public visitation from Monday through Wednesday. An invitation-only funeral service is set for Wednesday at Washington National Cathedral.

Afterward, Bush will be returned to Houston to lie in repose at St. Martin's Episcopal Church before burial Thursday at his family plot on Bush's presidential library on the campus of Texas A&M University.

Copyright 2018 by WJXT News4Jax. The Associated Press contributed to this report. All rights reserved. This material may not be published, broadcast, rewritten or redistributed.