Fire tears through home in Arlington

Have any questions about the Golden Ray? Open house set for Friday

Each day of the week through Saturday, the barbecue chain will commemorate a different branch of the military by offering a free sandwich of choice to veterans and active duty service members.

You will be able to receive your sandwich of choice on the day that your military branch is being honored.

The week is a way to give back and show appreciation to those who defend the county.

"Nothing is more American than BBQ cuisine and at Mission BBQ we don't feel like there's anything more American than like I said than those brave men and women who have taken the oath to protect, serve, and save our country. It's just another opportunity for us to give back, " said Michael Pasquale, operating partner of Mission BBQ on Blanding Boulevard in Orange Park.

During Monday's kickoff, Mission BBQ also donated to Wounded Warrior Project with a check for $31,220. The money was raised through a fundraising effort by the two Mission BBQs in the area -- the one in Orange Park and another on Town Center Parkway in Jacksonville.

Wounded Warrior Project is a nonprofit organization headquartered in Jacksonville that provides services, events and programs for wounded veterans. 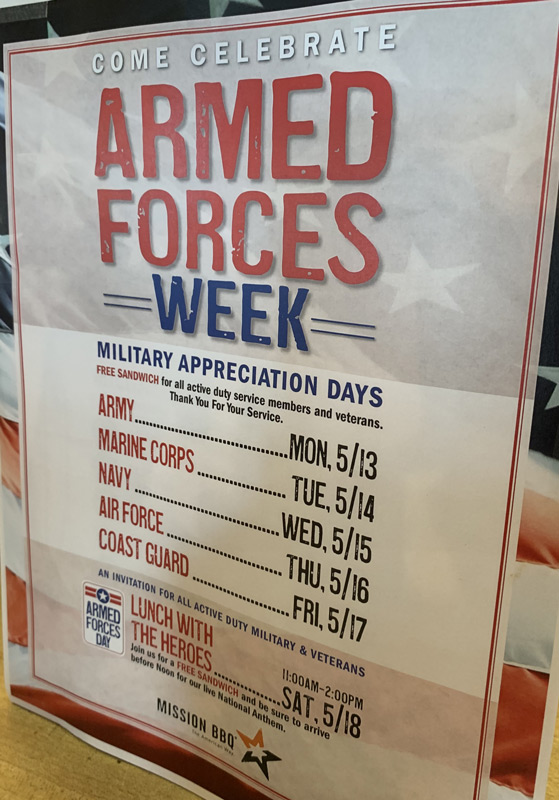 Below is a list of the Military Appreciation Days this week honoring different branches of the military:

Monday, May 13: Army
Tuesday, May 14: Marine Corps
Wednesday, May 15: Navy
Thursday, May 16: Air Force
Friday, May 17: Coast Guard
Saturday, May 18: Lunch with Heroes for all active duty military and veterans

Mission BBQ opened its doors on Sept. 11, 2011. The restaurant chain is now in 16 states with more than 70 locations.

Every day at noon, the restaurant stops and plays the national anthem.

The restaurant has events year around to honor armed forces, as well as first responders.

Anchors the 4:30 a.m. newscast, provides traffic updates throughout the rest of The Morning Show, then reports on events in the community.