Outpouring of support from community for family of Tristyn Bailey

What we know about Tristyn Bailey

Man referred to as John Doe 41

JACKSONVILLE, Fla. – Federal agents are trying to identify a person who may have information in connection with a child sexual exploitation investigation, the FBI said.

A video depicting the unknown person, referred to as John Doe 41, is believed to have been made sometime between 2016 and 2018 in a bathroom, federal agents said. It's unclear where in the United States the video was produced. 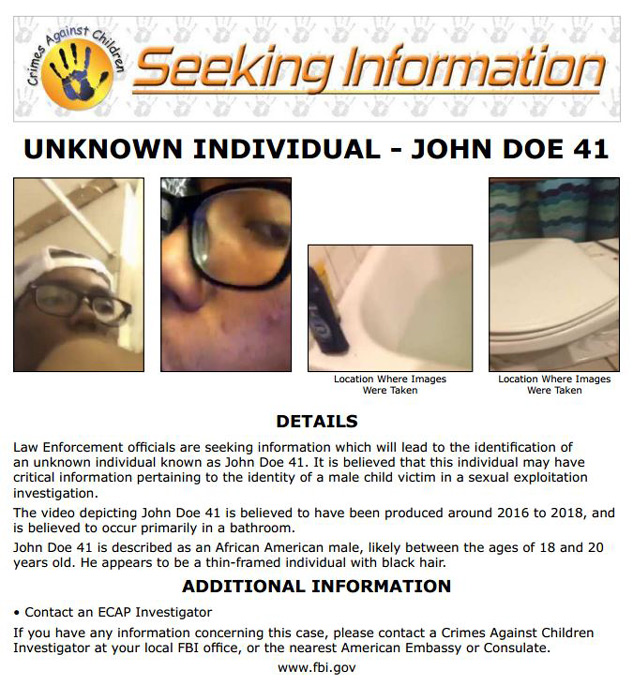 John Doe 41 is described as an African American man between the ages of 18 and 20 years old who has a thin frame and black hair.

According to the FBI, John Doe 41 might have critical information about the identity of a boy who is a victim in a sexual exploitation investigation.

News4Jax crime and safety expert Ken Jefferson said the case is likely a major investigation if the FBI is sending out a national call for help in identifying John Doe 41.

"This is exploitation at its highest peak, if you will, when the FBI puts out something this broad, so it’s not common to see something like this. It’s not common not to know more information than what’s been put out. But then again, they may be keeping some information close to the vest," Jefferson said.

That information, according to Jefferson, could be linked to other cases of sexual exploitation.

Anyone who recognizes the man pictured or has information about the case is asked to contact a Crimes Against Children Investigator at a local FBI office or the nearest American Embassy or Consulate. The phone number for the FBI's Jacksonville Field Office is 904-248-7000. The FBI's Major Case Contact Center phone number is 1-800-225-5324. Click here to submit an anonymous tip to the FBI online.