JACKSONVILLE, Fla. – From drought to flood, weeks of rainfall has erased northeast Florida's drought. The timing and amount of rain brought an amazing end to the fire season.

Over a foot of rain has fallen over Jacksonville in the last several weeks surpassing the entire year's meager rain accumulation. Jacksonville International only had 8.4 inches of rain for the year on May 20. By June 16, totals reached over 21 inches.

Below average rain since February dried out Florida and Georgia resulting in shriveled lakes and massive wildfires across the Okefenokee Swamp. 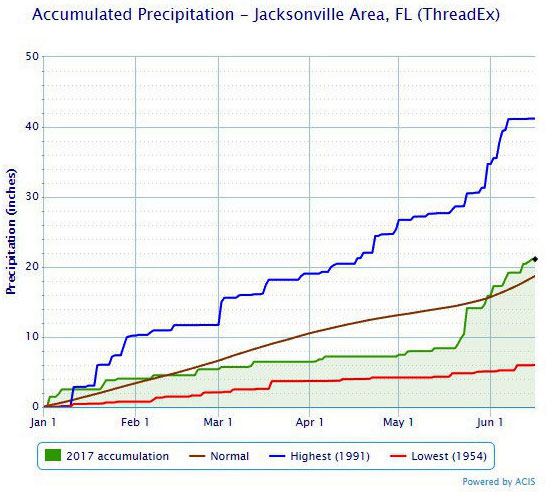 The drought dried up the water in the bog, killing vegetation which provided unprecedented fuels to power fires caused by lightning strikes and heat.

The weekly drought index published Thursday show 68% of Florida is no longer in a drought. A stalled front and ample tropical moisture flowing into the state kickstarted the rainy summer storm season.

The First Coast began drying out after Hurricane Matthew and by November nearly 40% of the state was abnormally dry in 2016. Parched conditions increased by March with 90% in a dry state and more than 50% in a serious D1 moderate to a D4 exceptional drought 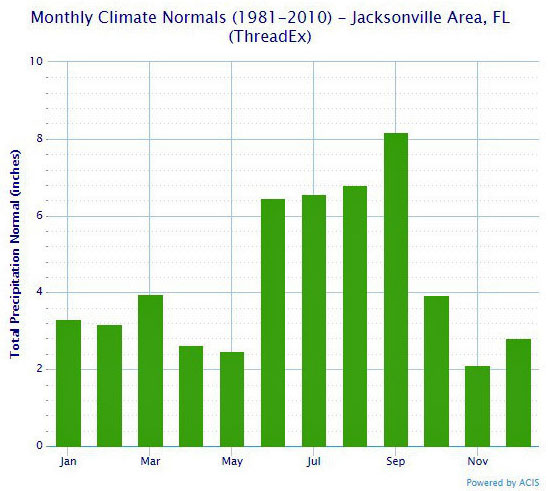 The rainy season in Jacksonville typically begins during the early part of June as humidity increases and heat sets up sea breeze collisions that generate afternoon thunderstorms. It peaks in September due to increased tropical threats and is at a minimum in November.

After covering the weather from every corner of Florida and doing marine research in the Gulf, Mark Collins settled in Jacksonville to forecast weather for The First Coast.