Some Florida restaurants wary of 100% capacity

Through the storm: News4Jax photojournalist trapped by Florence

JACKSONVILLE, Fla. – I've covered several hurricanes across the Southeast and lived and worked through Matthew and Irma, but Hurricane Florence packed a big punch to the areas of North Carolina and surrounding states like I’ve never experienced.

Days leading up to her arrival were very uncertain and somewhat scary. To think that a Category 4 storm might slam into the populated coastline created a lot of apprehension for the people of North Carolina, South Carolina and any and all areas in the cone of uncertainty.

Every single person in Florence’s possible path of destruction was on edge because of the size of the storm and what seemed like its laser focus on the North Carolina coast.

I was sent to Wilmington to help out with our sister station, WSLS, out of Roanoke, Virginia. With a much smaller staff and serving a community potentially in the path of the storm, their team certainly needed our help. Their people were brave and ready to take on the challenges of what was to come, and it proved once again why Graham Media is dedicated to safety and help for those affected by natural disasters.

As Florence made her approach, we got some of the best news we could receive: shear and dry air had weakened the hurricane to a Category 2. It was as if you could hear a sigh of relief only to be compared to letting air out of a tire. But even with weakening, I knew her fury was going to be relentless.

People of the Carolinas were glued to the TV and radio and took the warnings for evacuations seriously.

Landfall near Wilmington was one for the record books, as the size of this storm and the speed, or lack thereof, baffled just about everyone. The storm of the century for the Carolinas was upon us and it was time to stand our ground, while respecting her power and being in awe of the magnitude of her fierce arrival.

Hours came and went and Florence didn’t give up, wouldn’t leave or let go. She was there and was only going to leave when she wanted to. Minutes turned into hours. Hours to days. She was certainly not welcome anymore and people wanted her to exit. After dumping copious amounts of rains and throwing her wind at every direction, she eventually started to make a turn, creeping alongside river banks, leaving no stone unturned.

Finally, Florence departed, but the damage she caused brought everyone to a standstill. Rescue crews, power crews and public officials began to survey her destructive pass, and still do even at this hour. People began to wander out as day broke on Sunday, hoping and praying they had a home to go back to.

Roads were washed out and paths back to normal livelihood were held hostage by Florence’s damage and flooding. 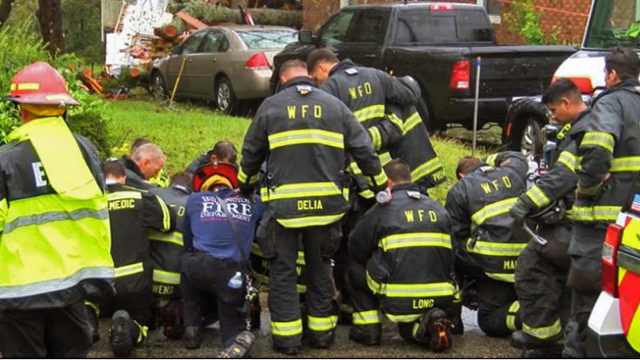 Florence took many lives, including children, who were just trying to run out and hunker down from her fury.

Wilmington firefighters knelt in prayer after the first of one of their calls for rescue ended in tragedy: A tree fell on a house, killing a child and a mother. Sadly, this wasn’t the last of the calls for help or deaths they encountered.

Hopefully, we will read of no more.

Florence was and still is one for the books. Those Graham Media sent to cover her landfall were left stranded when Wilmington became surrounded by flood waters.

We endured. We handled it as best we could, but it was the constant phone calls, text messages, emails and even, at points, guidance over the phone how to navigate away from the damage that kept us going and the care for our well being helped us push through.

It was all hands on deck to get us home and back to our families, and for that, a thank you can never be enough. From our Weather Authority team to all the managers and staff at Channel 4 that rolled up their sleeves and got to work to bring us out of harm's way, my sincere appreciation will never be able to be translated. From the bottom of my heart and from the crews with WSLS, we thank you.

And to our families, Thank you.

FLORENCE: How you can help

Natural disasters bring a reflection of what’s important in life, and to have everyone -- even more than 300 miles away -- who care so much and help so much, I want you to know it’s an act that hasn't gone unnoticed.

Here’s to sunnier skies ahead.

Editor's note: Matt made it home to his family Monday night -- six days after he left for Wilmington.