5 prominent Black women to be featured in Lincolnville museum exhibit

JACKSONVILLE, Fla. – Florida’s coasts and waterways are at a crossroads, according to a report out this month from Ocean Conservancy. The Washington D.C.-based environmental group is uncovering the crisis looming over the land and in the waters of the Sunshine State, while also calling for swift legislative action from the District of Columbia to Tallahassee.

The 21-page "Currents and Crossroads" report released earlier this month sheds light on what it called the dire state of our coastlines, lakes and rivers.

The majority of what it identified as "Nine Nasty Threats" to Florida's coast directly impact Northeast Florida's residents and ecosystem.

Florida's has 8,436 miles of waterfront, including inland waterways, and the coastline from Nassau County to Flagler County is considered a critical and vulnerable piece of the state's environmental puzzle.

In the aftermath of Hurricane Irma and a series of nor'easters, portions of beaches in Duval and St. Johns are among the 485 miles of eroding beaches around the state.

To make matters worse, 2018 was a record year for algal blooms in Florida. There was both the worst blue-green algae bloom in history and a devastating red tide outbreak that killed hundreds of animals and cost coastal communities millions of dollars.

Concerns were heightened along the First Coast as brown algae as is flowed out of the central and northern Indian River Lagoon into the Atlantic Ocean.

Meanwhile, offshore drilling remains a hot-button issue as a potential for economic revenue, but also as a possible threat to the environment. Of the five coastal counties in Northeast Florida, only St. Johns and Flagler counties have voted to oppose oil and gas drilling offshore. 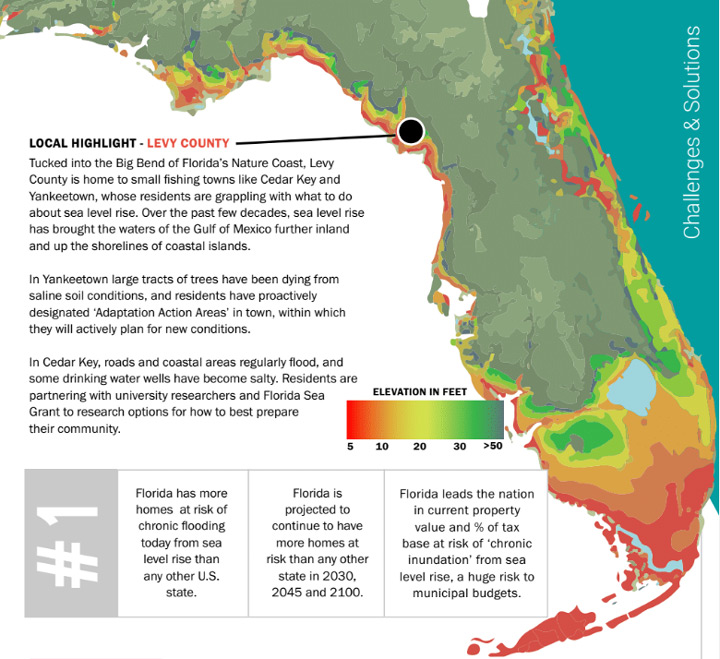 Hurricane Irma was a short-lived example of another that problem plagues cities like Jacksonville: sea level rise and flooding.

The Army Corps of Engineers projects 15 inches of sea level rise in the Florida Keys by 2045 and Miami Beach estimates it will spend $400 million over the next 20 years to keep seawater off its streets. Ocean Conservancy group projects that 2.1 million Floridians will live in homes at risk from chronic flooding in by 2100.

The organization map shows inland communities covered red are only elevated 5 to 10 feet above average water levels along the St. Johns River.

"We can’t address each of Florida’s environmental issues in a vacuum. For Florida’s ocean and coasts, this is an all-hands-on-deck moment," said, Jeff Watters, director of government relations for Ocean Conservancy.

The organization suggests that multifaceted approach includes active restoration and conservation efforts by residents and officials, while also calling policymakers to immediate action.