Weekend starts off with a burst of chilly morning temperatures

Community outreach continues to get the vaccine into more people

‘Not afraid of going to hell’: Kimberly Kessler again refuses food as she awaits murder trial

It pays to haggle over your cable bill

People with bundled plans often get perks, when they ask

When it comes to getting a better deal on your cable TV bill, Consumer Reports members say that it pays to haggle.

That's one of the breakaway findings of Consumer Reports' latest telecommunications survey, in which more than 176,000 CR members rated their home internet, TV and telephone service providers and the bundled plans offered by these companies.

CR members were largely dissatisfied with most of the companies covered in the ratings, especially for the perceived value of the services rendered. That's probably not surprising, given that respondents reported paying a median of $186 per month for a bundle of TV, internet and home phone services.

Most of the larger cable companies -- Optimum (Cablevision), Comcast, and Spectrum (Charter, Time Warner Cable, Bright House Networks) -- earned low marks for customer service and value, settling into the bottom half of the providers included in the new telecom service ratings.

One bright spot from the survey was that it's worth trying to negotiate with your provider over your cable bill -- and most respondents who have a bundled plan did. Seventy percent said they attempted to negotiate a better deal at some point, and among that group the overwhelming majority -- 80 percent -- were able to get one or more perks, including a new or extended promotional rate and outright price cuts.

What You Can Get

You can see what types of deals CR members were able to negotiate in the chart below. The good news for those who've been shell-shocked by a skyrocketing cable bill at the end of a promotion period is that nearly one-third of those who haggled were able to get a new promotional rate. Still others were able to get their current rate extended.

About a quarter of those who tried were able to get their pay-TV company to cut their monthly bills by up to $50. And a decent number were able to get either premium channels such as HBO and Showtime or a boost in their internet speeds at a discount, if not free.

One possible reason pay-TV companies are more open to dealing is the growing number of streaming video options such as DirecTV Now and Sling TV that replicate cable-style TV packages at a fraction of the cost (typically $25 to $45 per month).

Benefits of haggling over TV bundles: 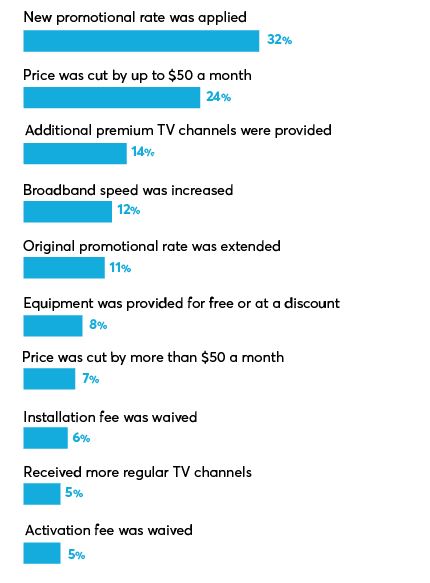 Note: In addition to the percentages reported above, 9 percent of members reported they received a gift card, a waiver of the contract requirement, and/or another benefit not listed.

As a result, Consumers Union, the advocacy division of Consumer Reports, has launched an effort to get companies to be more up front about the true cost of monthly service for customers.

You can join the campaign by signing a petition at WhatTheFee.com. CR plans to use the signatures to urge cable companies to make their pricing more transparent.

All Consumer Reports material Copyright 2018 Consumer Reports, Inc. ALL RIGHTS RESERVED. Consumer Reports is a not-for-profit organization which accepts no advertising. It has no commercial relationship with any advertiser or sponsor on this site. For more information visit consumer.org.