When the dust settles, who will run JEA?

PALM COAST, Fla. – The Florida Highway Patrol on Saturday has released the names of the three people killed Friday afternoon when a single-engine plane crashed into a house in Palm Coast: pilot Michael Anders, 57, from Albany, Kentucky, and passengers Duane Shaw, 59. and Charissee Peoples, 42.

The plane crashed at 2:19 p.m., less than 10 minutes after the pilot declared an emergency and reported smoke in the cockpit, telling a Daytona Beach air traffic controller: "We're just getting a little vibration. We have oil pressure problems. We're gonna have to drop quickly here."

Anders (pictured right) was a teacher at Clinton County School District in Kentucky.  Friday was his birthday.

The district released the following statement:

"The Clinton County School District is very saddened by the loss of teacher Mr. Michael Anders. Mr. Anders was the Spanish teacher at Clinton County High School. He will be deeply missed by staff and students."

The 1957 Beechcraft Bonanza, en route from Fort Pierce to Knoxville, was diverted to Flagler County Airport, but went down about a mile short of the runway.

"Apparently the air traffic controller had seen that they had entered a bad weather area, and that was just after the transmissions," said FHP Lt. Justin Asbury.  "Because of the steepness of the trees in the area, the tall pine trees, it looks like it was a pretty steep descent and it went right into the roof."

With hours, troopers confirmed that all three people on the plane were were dead.

Susan Crockett was in a back bedroom of the home on Utica Path -- about a mile east of the Flagler County Airport and just west of Interstate 95 -- when the plane crashed through her roof and started an intense fire that consumed most of the aircraft and much of the house.

A photo from the scene published by FlaglerLive.com and cell phone video shot by a resident showed flames coming through the roof of the house.

Crockett escaped through a window and was helped from the burning house by neighbors and first responders.

"She went right through the glass window. She's banged up, but she's going to be all right" neighbor Joe McBride said. "She's lucky to be alive because that house is a wreck."

LISTEN: 911 Phone call made by family

"The fact that my mom survived, the fact that she was able to get out, my mom is a strong woman and nothing will shake her because she has faith in God. I'm so thankful that she's still here," Jessica Crockett said.

McBride said he was looking outside when the plane passed low overhead not more than 40 feet in the air, he estimated. 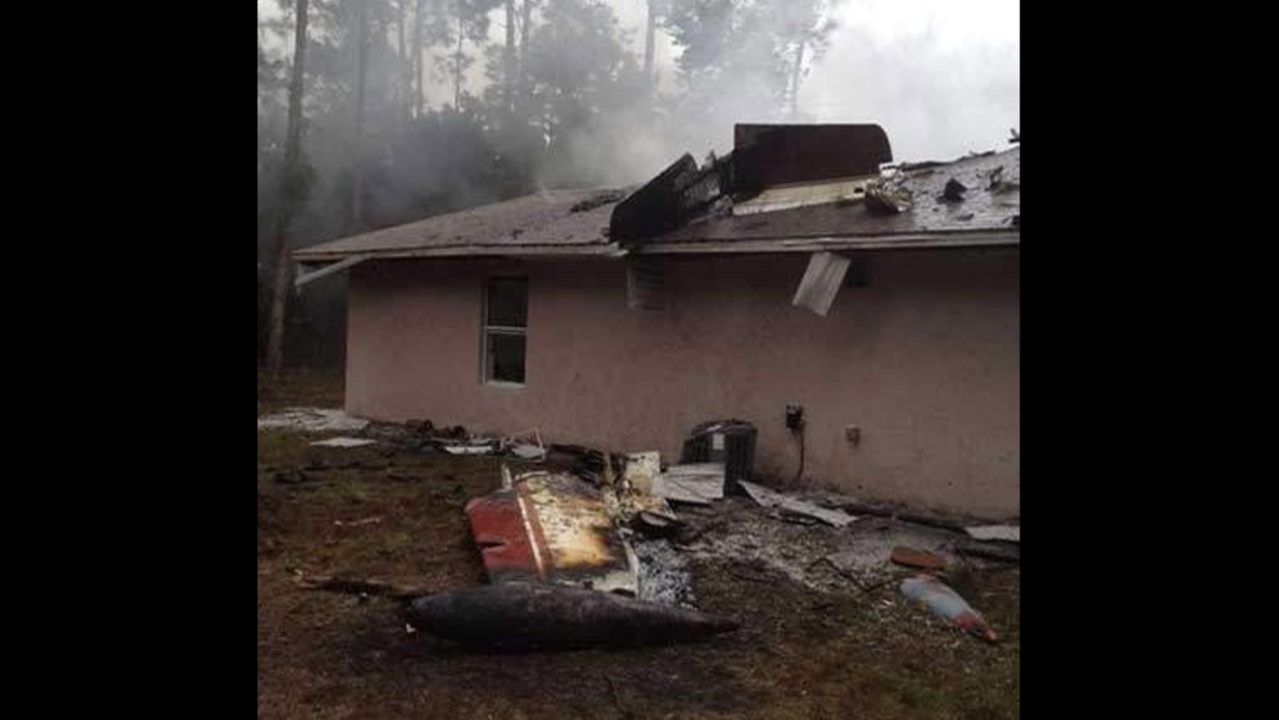 The plane was making an odd sound as it passed overhead, as if it was stalling, he said. "It sounded like the engine wasn't running right at all."

"I witnessed the entire thing happen. It was gut wrenching," said one post on FlaglerLive.com. "One minute you saw the plane ready to land, the next minute 'poof' it was gone and all you saw was a huge cloud of black smoke. My thoughts and prayers are with everyone involved."

The FAA reported there were only three people on board the single-engine general aviation aircraft that seats four people.

By late afternoon FHP confirmed three fatalities in the crash, but said they searched other victims. The Flagler County Sheriff's Office initially reported five people were on the plane.

The plane (pictured below) was registered in the British Virgin Islands and owned since 2008 by Anders -- a Spanish teacher at Clinton County High School. 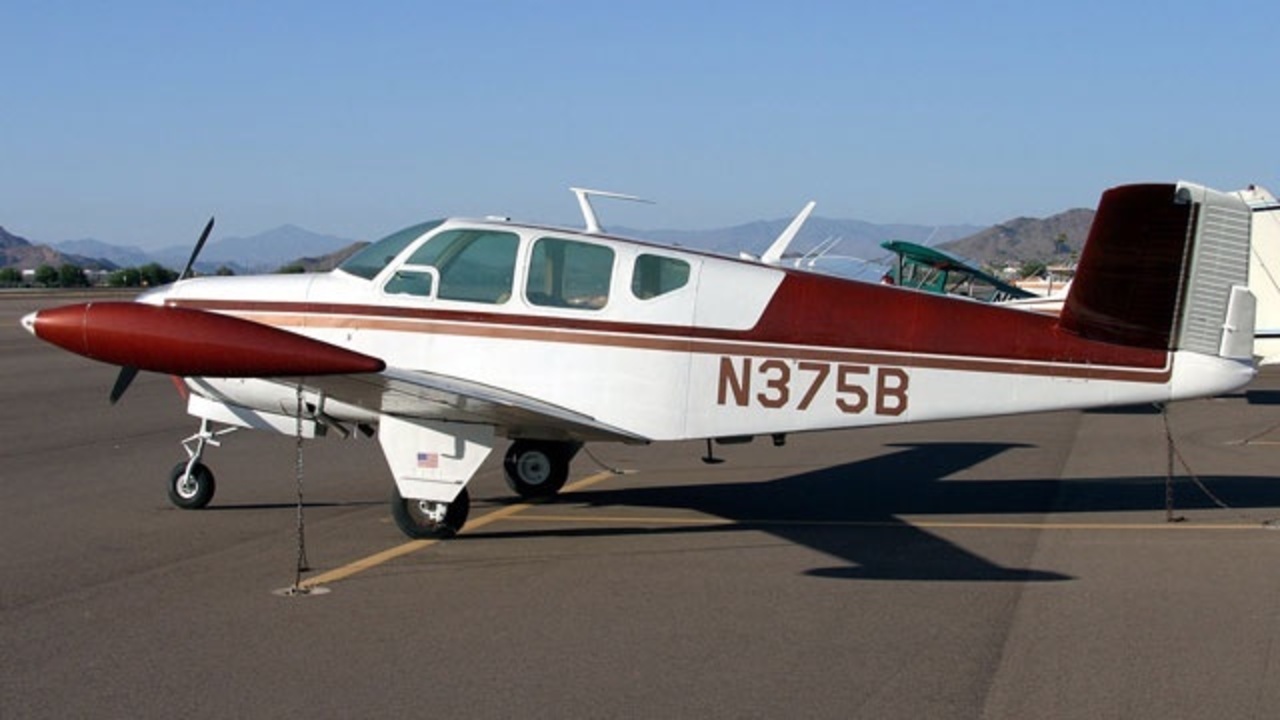 FlaglerLive.com reported that Anders was returning from spending the Christmas holidays in the Virgin Islands with his friend, Shaw -- also from Albany, Kentucky -- and Shaw's girlfriend, Peoples, who was from Indianapolis.

The National Transportation Safety Board arrived Friday night to take over the investigation.  While it could takes months to determine what caused the plane to crash, the NTSB scheduled a 3 p.m. Saturday news conference to provide an preliminary update.

Jessica Crockett said it's nothing short of a miracle that her 50-year-old mother, Susan, survived the crash. Her mother was the only one home at the time, and Crockett said she was in her bedroom when the plane carrying three crashed into her home.

"It's nothing but God," said Crockett. "The fact that my mom survived, the fact that she was able to get out."

Crockett said her mother immediately climbed out of her bedroom window and ran across the street to safety.

Paramedics took her to the hospital, but only as a precaution. Crockett said her mother is going to be just fine.

While Susan did survive the crash, investigators said all three people on board had died.

"My heart just goes out to their families," said Crockett. "I can only imagine what it will be like to lose a loved one. I will be praying for their families."

Neighbor Robert Ferrigno said he heard a loud sputtering noise from the engine and then a boom.

"I looked out the front window, up the street, and there's flames coming out the house," said Ferrigno.

Ferrigno said the flames were as high as the surrounding trees, which are about 40 feet tall.

Ferrigno said house insulation was coming down from the sky like snow. He said the homeowner was already in a neighbor's garage across the street.

"Unfortunately things like that happen. Accidents do happen, but never this close to home," Ferrigno said.

Tim Hornsby lives next door to the Crockett's with his wife and 7-week-old baby.

"There's insulation and pieces of it all over my yard," said Hornsby. "I'll be cleaning up tomorrow."

Hornsby said he wasn't home when the plane crashed, but the rest of his family had to be evacuated.

"My wife was pretty upset, yes," said Hornsby. "She was upset after seeing the explosion. I didn't see the accident, but heard the explosion."

The FAA reported the plane was flying under visual flight rules, but weather conditions at the time in Flagler County showed a low cloud cover that would have required instrument flight rules.

"A pilot who flies a lot in Florida knows that the conditions can change dramatically very quickly," said Channel 4's Sam Kouvaris, who is an experienced pilot.