VyStar’s online banking restored after a brief outage on Friday

QUESTION: What do you think about raising property taxes for teacher raises?

Learn everything you need to know about coding for under $40

JACKSONVILLE, Fla. – FBI documents from the investigation of Ronnie Hyde, the man accused of killing and dismembering a 16-year-old boy more than two decades ago, show he was the victim's foster parent, and include a list of more than a half-dozen unsolved cases of missing boys and young men that agents labeled potentially relevant.

Hyde, 61, is awaiting trial in the 1994 murder and dismemberment of Fred Laster - a teenager he had befriended through a church. It wasn't until last year when, according to police, Hyde was linked to Laster's murder through DNA evidence.

Hyde's tax returns from 1992 and 1993 list the victim, Laster, as his foster child but in 1995, a year after the teen was murdered, he was still listed as a dependent.

Laster was not the only foster child listed on Hyde's past tax returns, there are others listed under his care during the 1990's.

Scattered in the files are old pictures that show a younger Hyde surrounded by children inside a home.

Among cases on the FBI "potentially relevant" list were those of Mark Degner and Brian Hayes (shown below in age-progression photos), who ran away from Paxon Middle School in 2005 and were never found.

Brian's mother, Alene Hayes, said she thinks it's too coincidental that the boys disappeared about 8 miles away from Hyde's property on Thelma Street.

“I think it’s a possibility for sure because we’ve never been able to figure out what really happened to them. We never really believed they ran away," Hayes said. "They weren't prepared to run away. They had no money, nothing, no food.”

One document among the more than 3,000 included in the release from the State Attorney's Office indicates that a backpack with clothes found at a vacant building on Windemere Drive was labeled “Mark D." Investigators believe the backpack was possibly associated with their disappearance.

Also on the FBI list was the unsolved 1988 killing of 11-year-old Dallas Green.

A timeline of Hyde's work history shows he was unemployed during the time of these unsolved cases.

The FBI noted that persons of interest have been identified, but Hyde is not named as one.

NOTE: The rest of this article contains details some might consider disturbing.

Other evidence obtained by News4Jax on Friday includes photos inside the two houses owned by Hyde, his residence in Jacksonville Beach and the second home on Thelma Street in Jacksonville.

In the Jacksonville Beach house, evidence technicians seemed particularly interested in the bathtub, which shows nine evidence markers for what could be bone fragments. 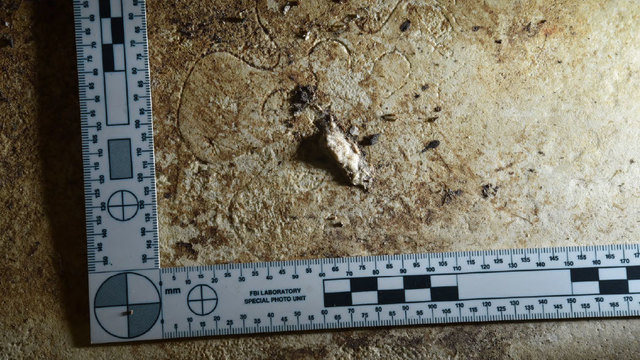 One document said the bathtub “was found to have adhesive residue in multiple locations on the floor of the tub, which appeared to be in the same general shape and size as the five pieces of decorative non-slip pads that were found in the dumpster” -- the dumpster where Laster’s torso was found in Lake City.

Medical examiner notes revealed Laster’s hands, head and lower extremities were severed from the torso. The notes said the incisions were jagged and the body parts were decomposed.

In the thousands of pages of evidence were photos of pornography, clothing items with a reddish substance on them, tools that could have been used for dismemberment and what was referred to as clandestine graves, although lab reports show that bones found while excavating Hyde's backyard were from animals.

While combing through the documents, News4Jax came across pictures of fetish film DVD covers and how much Hyde had paid to purchase the DVDs. The movies were about boys and nudism. The documents also contained screen printouts from X-rated gay websites that were portraying young adults as teenage boys.

The documents released included a lot of reports on Hyde's time as a counselor with both inmates in prison and children at churches.

There are statements from Hyde’s former clients and co-workers, which paint a picture of a man who seems obsessed with boys and child death.

A written statement from a coworker said Hyde made comments to a group of other coworkers about providing drinks to a 15-year-old boy and the two of them being in their underwear while lying in bed together. The documents also contained a photo, which was described as two pairs of boys' underwear and one pair of a girl's underwear.

In a statement, another co-worker told FBI agents that Hyde talked about going to TPC Sawgrass to meet young boys and that he showered at a local YMCA.

In another statement, one of Hyde’s clients revealed to FBI agents that Hyde told her he had seen naked boys in a YMCA locker room. She also told agents that Hyde discussed an experiment of children coming back to life from being dead. Investigators took pictures of multiple news clippings found in Hyde’s home. The headlines on the articles were about children being killed.

Also among the documents was a resume' from Hyde written in 1989. It said he was seeking an opportunity in psychiatric or social work in which his strong background in youth-oriented residential or outpatient services may be utilized.

And he apparently did work with many young boys.  A former patient who is now an adult prison inmate claims Hyde would take the boys from Duval house out to a farm in Jacksonville and have sex with them in a trailer.

There was also several videos of child pornography found in Hyde's home with disturbing descriptions. One read, "In a room full of sugar-stuffed testosterone fueled boys, there isn't much relaxation."

One investigator wrote that the videos were used by Hyde "to satisfy his sexually deviant thoughts related to young boys."

This was both before and after the murder of Fred Laster in 1994. The evidence contains disturbing details about how Laster's torso was found outside a Lake City dumpster.

The report said a woman with car trouble pulled into a gas station and her dog went to the back side of a trash dumpster, alerting her to the torso.

There was also this tip to the FBI that Hyde “either worked for or volunteered as a youth counselor for the American Association of Nude Recreation at their youth camps. Sounds like they put the fox in the hen house."

Investigators and prosecutors said since Hyde's March 2017 arrest in the Laster case that there could be other victims. The FBI even rented billboards around Jacksonville asking for anyone who had information about Hyde to come forward.

“Now there is that search for others. You know if there was one body, I think reason told you that there may very well be others, if not that were killed, others that may have been abused - exploited somehow,” former FBI special agent Toni Chrabot told News4Jax.

Hyde's trial is set for early December. His next pretrial hearing is in August.