Thousands of Amelia Island residents without power after mainline accident

The 15-story building that served as the city's headquarters for nearly 40 years is set to come crashing down in a cloud of dust at 8 a.m. News4Jax will have live coverage starting at 6 a.m.

While The Weather Authority team is forecasting rain for Sunday morning, the city said rain is not a concern for the implosion, although lightning or low clouds could delay the detonation until conditions permit. Asked for an update Wednesday, the mayor's chief administrative assistant, Sam Mousa said everything was still on target, but they were watching the weather closely.

Ahead of the implosion, the city of Jacksonville released a flyer alerting people about the implosion. It includes a map of the area that will be restricted and frequently asked questions about the upcoming event.

According to the city, demolition is expected to last no more than five minutes, but the dust cloud may persist for a long period.

The city previously told News4Jax there will not be a public viewing site for the implosion of the building, which was considered state-of-the-art when it opened in 1960. But there are some vantage points downtown, outside the exclusion area, and on the Southbank Riverwalk.

Crews aim to demolish the old Duval County Courthouse by spring. The neighboring courthouse building will be brought to the ground by bulldozers and other equipment, and will not be imploded.

What are the plans for the old City Hall?

The implosion of the old City Hall, located at 220 E. Bay St., is currently scheduled for 8 a.m. Sunday, Jan. 20. The City of Jacksonville Public Works’ team is continuing to work closely with construction personnel and contractors to ensure demolition readiness and implosion efforts promote and support safe conditions and the environment.

Will I be able to get in and out of the area? 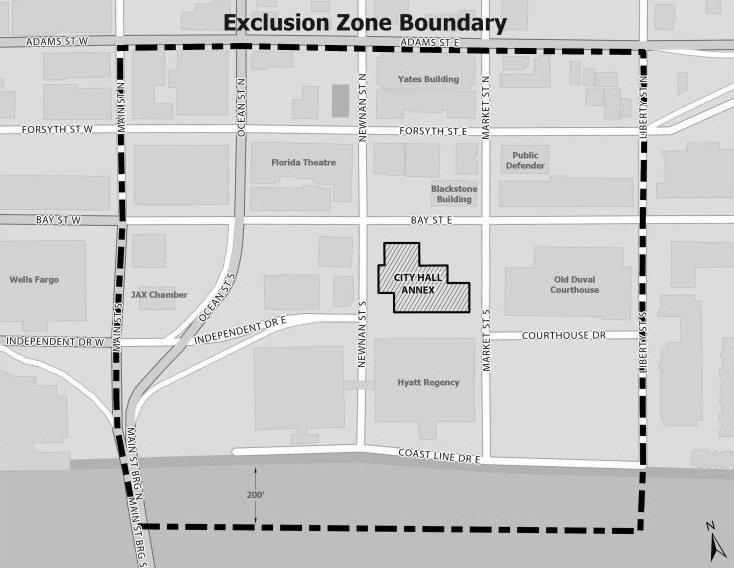 Public access to and around the demolition area is restricted. This area (shown on the map to the right) is considered an exclusion zone. It involves the area between Main, Liberty and Adams streets, as well as a portion of the St. Johns River near the Main Street Bridge.

Residents and business personnel required to be in the area during the time of implosion are instructed to stay indoors and shelter in place for the duration of the implosion.

Noise/sound pressure levels and lingering dust may pose a safety risk to citizens. All doors, windows and entryways are to be kept closed and exhaust fans turned off.

How long is this expected to last?

The duration includes both pre- and post-demolition work and is scheduled to occur from 7 a.m. to 10 a.m. Sunday. Roads will be closed to vehicle, boat and foot traffic during this time. However, areas will reopen and access restored by the Jacksonville Sheriff’s Office as clean-up efforts are completed.

There is one exception. Newnan Street, which is right next to old City Hall, will be closed starting Saturday.

Will I know when the implosion has started?

A horn siren will be used to announce when the demolition is commencing and has concluded. At 7:58 a.m., a series of sirens will blare, announcing a two-minute warning for the implosion. Once the demolition is finished, a siren will sound, notifying successful completion. This is not a signal for citizens to come out from sheltering in place.

Can I come out when the blast is over?

The demolition is expected to last no more than five minutes. However, the falling debris is expected to produce a dust cloud that, with wind, can travel outside of the immediate area and last much longer. It is critical for all to remain indoors and shelter in place until access notification is provided by JSO.

Am I in danger if I come out prior to notification?

Months of comprehensive work has been conducted to ready the building for implosion, including the remediation and removal of hazardous interior materials. However, to minimize health risks and threats to persons -- especially those with breathing and/or respiratory conditions -- everyone is advised to remain indoors and shelter in place until notification is provided. In addition, noise and sound pressure levels at and near the site during the blast may pose a threat to hearing, reaffirming the critical need to shelter in place.

Are there other restrictions in the city?

River and air traffic are also restricted. A section of the river is restricted and is being managed by JSO Marine Unit and the Florida Fish and Wildlife Conservation Commission. Air traffic, including drones, is restricted to a half-mile radius above the demolition site (2,500 feet).

Will the implosion happen rain or shine?

Weather conditions such as thunderstorms and low cloud coverage can affect the scheduled demolition. If either occurs, the demolition will commence when conditions warrant (as close to the 8 a.m. hour.)

Why is the implosion occurring on a Sunday?

The contractor, who is an experienced and internationally recognized controlled demolition provider, advises that Sunday is the least disruptive day for an implosion, where high traffic volumes, increased downtown activities, business openings and merchant transactions are minimal.