Philip Hamilton of the Anderson Cabot Center for Ocean Life at the New England Aquarium says the calves are “a spark of hope” for the critically endangered marine mammals.

Right whales typically migrate from the North Atlantic to give birth off the coasts of Georgia and Florida from December through March.

Scientists estimate only about 450 North Atlantic right whales remain. No newborns were spotted during the last calving season, and just five calves were counted during the previous year. 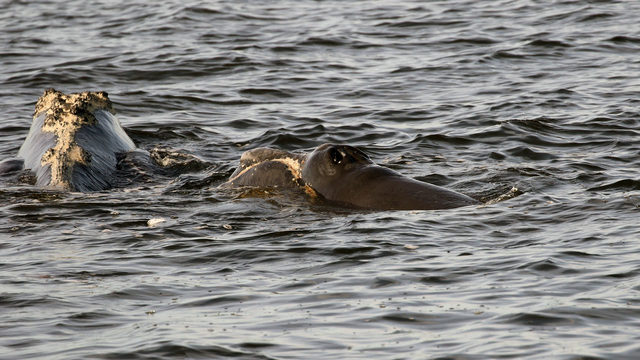 On Jan. 6, an FWC survey aircraft spotted a North Atlantic right whale with her approximately 2-week-old calf about six miles east of Amelia Island. Whale researchers from the Georgia DNR and Sea to Shore Alliance were nearby and approached in a small boat to take high-definition images and video to identify the whale and assess her health assessment.

Jan. 13, a right whale mother and calf were visible just off the beach of Ponte Vedra Beach. Four days later, an aircraft spotted a different mother and calf less than three miles off the coast of Amelia Island.

Right whales and humpback whales are often visible from shore in Florida during the winter. Please report whale sightings to 877-WHALE-HELP. Because right whales are endangered, only federally permitted researchers are allowed within 500 yards of the endangered species.