Heat Advisories are in effect for much of the area

Florida Department of Transportation's $7.7M project to begin at end of April

ST. JOHNS COUNTY, Fla. – The Florida Department of Transportation will be adding hundreds of lights along State Road 16 in an effort to make the busy road in St. Johns County safer.

The $7.7 million safety improvement project along S.R. 16 will begin at the end of April and is expected to be completed in spring 2021.

On Thursday, News4Jax spoke with bicyclists who said lights are needed because there have been too many accidents along the road.

William Scheritz, who has lived in St. Johns County for 45 years and bikes along S.R. 16 at least three times a week, knows the dangers of the road firsthand.

"I (was) already hit one time on this road," William Scheritz said. "He just kept on going and I messed up my knee." 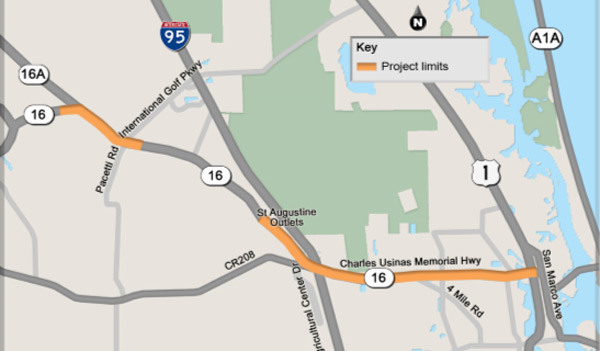 The state Department of Transportation said it will install 423 light poles on S.R. 16 from County Road 16A to San Marco Avenue, with an exception from west of Verona Way to the north entrance of the St. Augustine Premium Outlets. There’s already some lighting, but there will be more added for the Interstate 95 overpass and highmast lights at the interchange, and the lights at the San Sebastian Bridge will be replaced.

"I think it'll help a lot," William Scheritz said. "A lot of people get hit on this road."

Within the project limits, according to FDOT, there have been about 800 crashes from 2009 to 2013. FDOT is hoping that the addition of the new light poles in the area will reduce the number of crashes.

The St. Johns County Sheriff's Office said lighting can improve safety, but there are other contributing factors to accidents, such as texting and reckless drivers.

St. Johns County resident Brenda Scheritz said that even though there are bike lanes on S.R. 16, it's still too dangerous for bicyclists, especially at night.

"You have lights on your bike. It still doesn’t matter," she said. "They still hit you, no matter what."

According to FDOT, the light installation project will cause some lane and sidewalk closures, so it will be important for drivers and pedestrians to pay close attention to construction signs and follow detours.