Long stretch of warm and mostly dry weather this week

Pilot before plane hit St. Johns: 'Go ahead, let's do it'

NTSB report finds plane veered back & forth before skidding into river

JACKSONVILLE, Fla. – A chartered jet that ran off a runway and into a river at a Florida military base earlier this month touched down to the right of the runway's centerline, returned to the centerline and then veered again to the right.

The veering of the plane during landing was among new details released Thursday in a report from the National Transportation Safety Board, which is investigating why the plane ended up in the St. Johns River at Naval Air Station Jacksonville.

The NTSB says the Miami Air flight encountered heavy rain as it began descent and switched to a different runway where the weather seemed better. The reports notes that thunderstorms with frequent lightning were in the area. 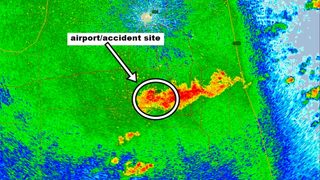 According to the report, about 9:24 p.m. the tower controller advised the approach controller that runways 10 and 28 at the airport were "pretty rough" and "pretty socked in." The pilot was advised of moderate to heavy rain in the area. The pilot continued his approach.

The NTSB determined that about 9:30 p.m., the approach controller advised the pilot that the storm was moving east, and asked if the pilot would like to land on runway 10, as the conditions might be better. The pilot responded, saying: "Yeah go ahead, let's do it." At 9:37 p.m., the flight was cleared for the approach to runway 10. (The screengrab pictured above was taken from the National Weather Service radar around 9:43 p.m.)

The plane left the runway about 60 feet right of the centerline onto the grass before hitting a rocky embankment at the end of the runway, before stopping in the St. Johns River. The landing gear separated from the plane during landing and the plane stopped in less than 5 feet of water. No one was seriously injured.

"Why did the captain have to make the approach -- that he did not wait 10 minutes," questioned News4Jax aviation analyst Ed Booth. "That's what we're talking about, 10 to 15 minutes. The aircraft had plenty of fuel, so, there was no reason to rush."

At the time of the crash, the plane had logged 38,928 total flight hours, with 15,610 total flight cycles, according to the report.

The NTSB said the captain had been working for Miami Air since March 2008, with about 7,500 hours of total flight experience. The flight was part of an "operating experience trip" for the plane's first officer, who was hired by Miami Air in January.

Investigators said the crew that was on board the plane had previously made a flight from NAS Jacksonville to Guantanamo Bay.