Winds also knock light pole down on eastbound I-10

JACKSONVILLE, Fla. – A pulse thunderstorm popped up Tuesday afternoon, dropping up to three inches of rain that left roads flooded in the McCoys Creek area and other parts of Jacksonville.

There was minor flooding in Hogans Creek, but it was not nearly as bad as McCoys Creek.

Part of Edgewood Avenue just north of Interstate 10 was flooded. Nearby in the Lackawanna area, Sharon Jones and several of her neighbors had to deal with flooding throughout their rental home community.

"The flooding was really thick," Jones said. "It was like a river out here."

But floodwaters were the least of her concern.

“We heard this big old tree right back here and I mean it snapped and broke and when it did, we were scared," Jones said. "We almost went into the bathroom and do the bathtub thing to put mattresses over because we were getting that scared."

Less than a mile away, at a home on Bland Avenue, near Cassat and Highway avenues, a tree fell onto a boat and an SUV sitting in the driveway. The owners said they believe it was the result of a lightning strike to the tree.

According to Duval County Public Schools, there was water damage to the ceiling of Kirby Smith Middle School as a result of rain, but it did not affect the National Junior Honor Society meeting Tuesday afternoon and will not affect the graduation that is scheduled for Wednesday. There will be no impact to students or classes Wednesday, a school district spokesperson said.

News4Jax was told a drainage pipe burst in the Main Library downtown. Water flooded down into the main lobby and then down the stairs to the conference room. 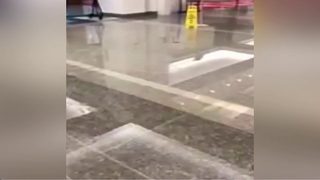 No books or materials were damaged. Crews were mopping up the water and the library is expected to open as normal Wednesday morning.

According to the Florida Highway Patrol, winds knocked a light pole down on eastbound I-10 between Lane and Cassat avenues about 4:30 p.m. while the area was under a severe thunderstorm warning. All eastbound lanes were blocked for a short period of time, but crews were able to move part of the pole so that only the left lane was blocked at last check.

Around the same time, lightning sparked a fire at a hangar at Naval Air Station Jacksonville, firefighters said.

There were also power outages. At the height of the outages, 4,800 customers were without power, according to JEA.

In Baker County, there were several downed tree on Abernathy Circle in Sanderson after a storm blew through the area about 6:30 p.m., the Baker County Sheriff's Office said. Deputies said no one was injured and they were assisting homeowners.