Crash on I-95 near Jacksonville airport slows traffic

Brunswick offers $500 to employees who get vaccinated

Never run out of documentaries to watch with this streaming subscription

This cordless vacuum has twice the battery runtime of its competitors

JACKSONVILLE, Fla. – A 35-year-old man is facing a DUI charge after police said he slammed a car into a building early Wednesday morning in Murray Hill and took off.

The crash damaged the front of the Kirby Vacuum Service & Repair shop at the intersection of Post and Melba streets.

A witness said the car was speeding when it hit the building just after 1 a.m. and two people got out of the car and ran. No injuries were reported.

Police later arrested James Keating and charged him with DUI causing property damage, leaving the scene of an accident and resisting arrest.

According to Keating's arrest report, Jerry Moran, the owner of nearby La Cena Ristorante, reported Keating to police after the 35-year-old tried to get in his car thinking he was an Uber or a Lyft driver.

“I saw police lights so I turned onto Post and I said to the policeman, 'Are you looking for a guy in a white shirt?' He said, 'Yeah,' and I said, 'He’s over on College,' and they ran over there and they got him," Moran told News4Jax.

Moran got cellphone video of the damage to the repair shop, which shows the front wall collapsed and furniture scattered and smashed to splinters. 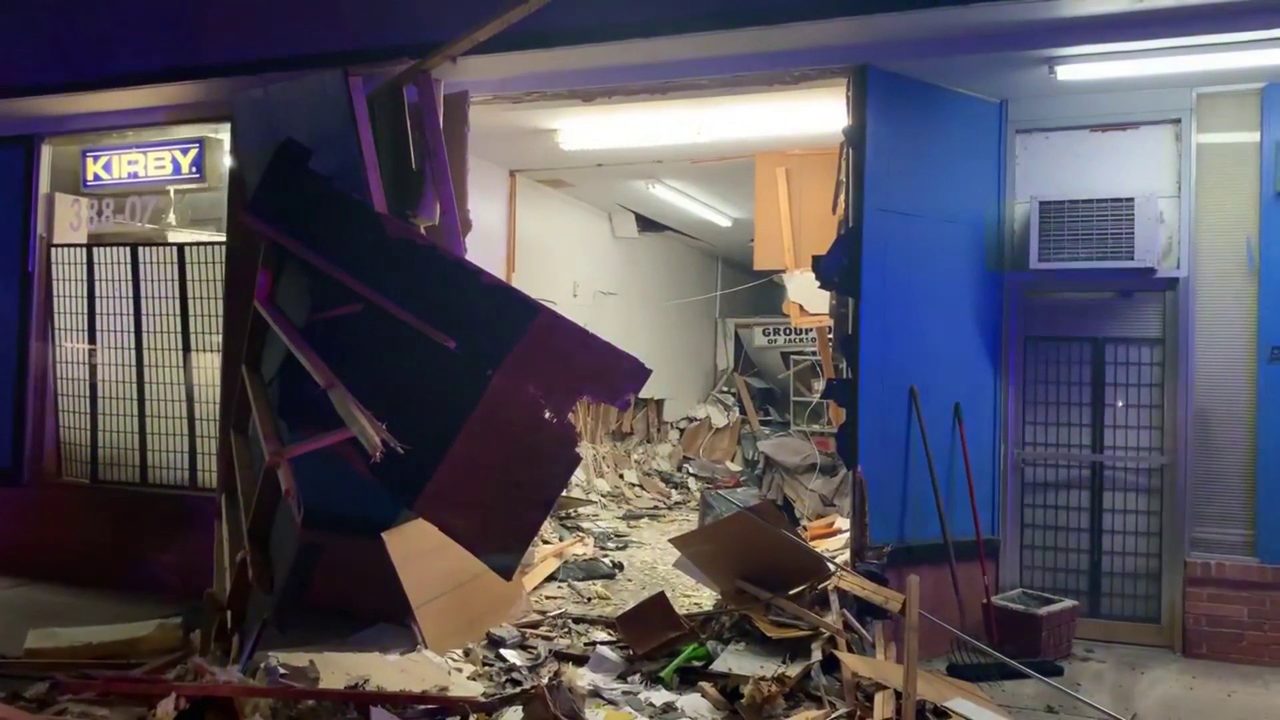 The repair shop owner, Brent Loy, said the damages left behind left him shaking his head.

“I just laughed. Their just keepsakes, you know, not a big deal. But the computers are gone. All the files right there on that table, they’re all gone," Loy said. "I had planned on spending the next four months calling all the customers to get the database going. People come in, get service -- we do a yearly service on the Kirby vacuum -- and now I get to dig through all this and find them."

Loy said this has happened to his business multiple times. In the past, he's had poles and lights installed to prevent cars from crashing into his building. He plans on contacting the City Council and getting something done to improve the safety of the road.

“I’ve actually seen people hit out here and killed because they miss this turn," Loy said.

Loy reopened for business Wednesday despite the damage.

One of his longtime customers said she wants to help in any way she can.

“It’s just really traumatized me and hurt me because I’ve been coming down here since '67,” Pamela Miller said.

The owner tells me they will reopen today. He says cars have crashed into his business before and wants something to be done to make the turn more noticeable for drivers. @wjxt4 pic.twitter.com/T8ZeBXbhKQ