Police have no motive, no suspects in death of father of 3

JACKSONVILLE BEACH, Fla. – The family of a father of three who was shot and killed steps from his Jacksonville Beach apartment Thursday night is pleading for answers.

Police said 28-year-old Jake Hall was shot about 9:40 p.m. near the intersection of 17th Avenue North and Second Street North. Three responding officers performed CPR on Hall until fire rescue crews arrived, but he could not be revived.

Hall had two daughters and a son -- 2, 3 and 5 years old. He was an avid outdoorsman and worked as a mechanic.

Rodenbaugh is the mother of two of Hall’s children. The mother of his youngest child lived with him at the apartment. She said she was too devastated to comment Friday.

A neighbor said he heard several gunshots, ran outside and found Hall's youngest daughter alone in the doorway of his apartment. He then discovered Hall at the edge of his complex’s driveway, next to the street.

“I got down on my hands and knees,” said the man, who asked not to be identified. “I looked him in the face and his eyes were closed. I said ‘Who shot you? Who shot you?’”

Hall was still breathing but didn’t answer. The neighbor, who knew Hall personally, shouted for others to call 911 and waited with Hall until first responders arrived.

"What kind of person does something like that?" said Kristin Vaughan, the grandmother of two of the children. "And (to) have that child say, 'Well, my Daddy is laying on the ground,’ and not know why."

"There are no words that can explain this loss. My children no longer have a father," Rodenbaugh said.

Hall's parents spent most of Friday morning at the Jacksonville Beach Police Department talking to detectives. He was their only child. 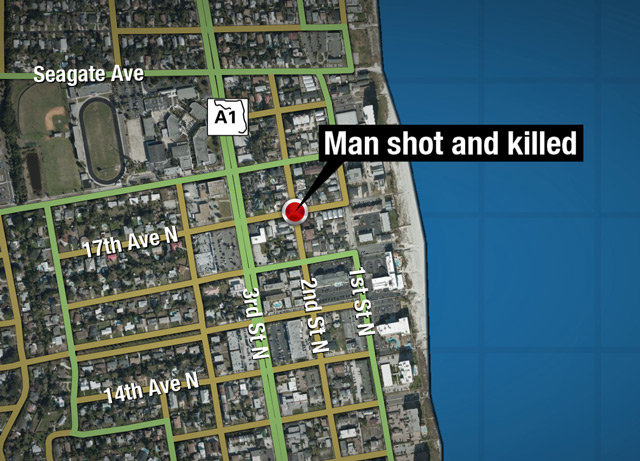 Sgt. Larry Smith said Friday that investigators have found no motive and do not have any suspect information.

Police spent much of the night and the following day looking for evidence, using metal detectors to search the grass nearby.

Investigators are asking anyone living within a six-block radius of the shooting to review doorbell or outside security camera and notify police if anything of interest was captured. They asked businesses along Third Street, just one block from the shooting scene, to also check their footage.

Smith said officers were not aware of any disturbances or calls at the address prior to the shooting.
Anyone with information about the case can call the Jacksonville Beach Police Department at 904-270-1661 or call Crime Stoppers at 866-845-TIPS (8477).