Article contributed by the Florida Museum of Natural History

Fatal rollover crash blocks lanes of I-295 at Wilson Boulevard

Create art like never before with this $29.99 Adobe CC training bundle

Keep your beverages toasty for a discount

Article contributed by the Florida Museum of Natural History

GAINESVILLE, Fla. – Each fall, millions of migratory birds fly over Florida under the cover of night, hightailing it south for the winter. Many never reach their destination. Disoriented by the lights and glass of cityscapes, thousands of birds die after colliding into buildings and windows.

To prevent these deaths, cities across the U.S. are hosting “Lights Out” campaigns that encourage building managers and residents to reduce light pollution during birds’ spring and fall migrations. Bird-friendly practices include turning off nonessential lights from 11 p.m. to 5 a.m.; closing blinds; shielding outdoor lights or aiming them downward; and using motion detectors or sensors to cue lights.

Northeast Florida lies in the second-largest migration path for birds, the Atlantic Flyway, one of four major routes in the U.S. This fall marks Jacksonville’s second Lights Out initiative, a collaboration between the Jacksonville Zoo and Gardens and the Audubon societies of Duval and St. Johns counties. As part of the project, volunteers walk through downtown Jacksonville at dawn every week from mid-September to mid-November, tasked with documenting and collecting the bodies of birds that struck buildings during the night.

“Every year in the U.S., we’re losing millions of birds that fly into structures,” said Jacksonville Zoo curator Mike Taylor, who leads Lights Out Northeast Florida. “A good deal could be mitigated by paying attention to lighting. People love cityscapes and the skyline at night, but there are better ways to light them to make them bird-safe.” 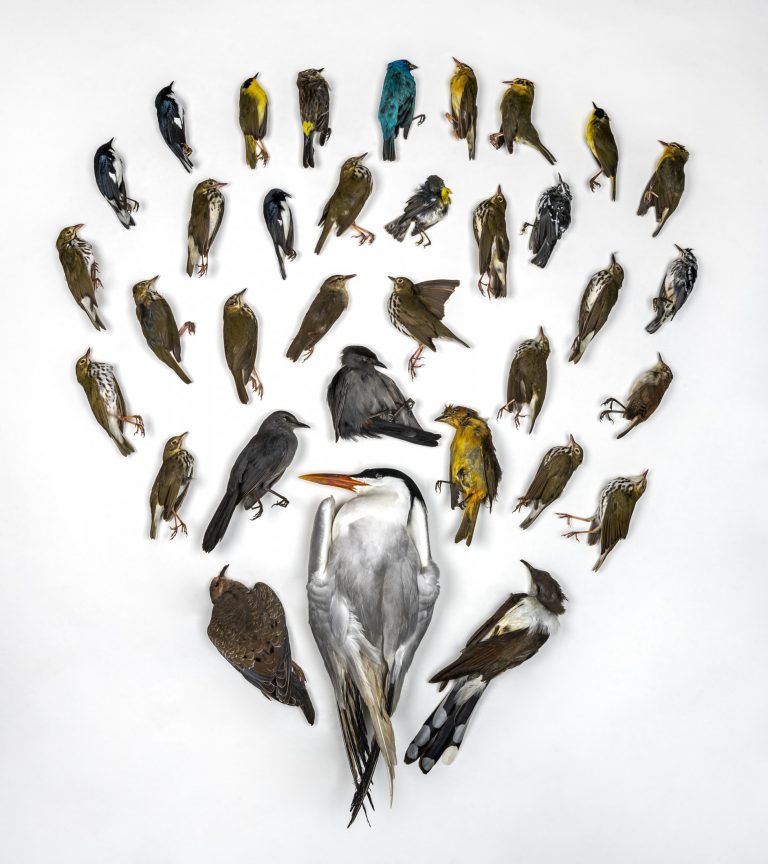 These birds were killed after flying into downtown Jacksonville buildings during spring migration. A royal tern, bottom center, is flanked by a mourning dove, left, and yellow-billed cuckoo, right. By becoming scientific specimens at the Florida Museum, their deaths help scientists gain insight into which birds are most vulnerable to collisions. (Florida Museum photo by Kristen Grace)

Injured birds undergo rehabilitation at the zoo while dead birds are donated to the Florida Museum of Natural History. There, Hannah Chelgren and Rachel Woods, recent University of Florida graduates and bird curation specialists, prepare the specimens to join the museum’s ornithology collection, where they will be available for scientific study.

Chelgren said most of the dead birds collected during the Lights Out campaign show signs of severe head or neck trauma. But they can also provide valuable information about which species are most susceptible to striking buildings in Florida.

“This could tell us how urban structures are affecting bird populations and migration, which is really important as we continue to urbanize,” Chelgren said. “We need to know how that’s changing the landscape for wildlife.”

In the spring, the museum received 61 birds collected by Lights Out volunteers in Jacksonville. Among the 26 species represented were 22 ovenbirds – a small North American songbird – black-throated blue warblers, a yellow-billed cuckoo and a royal tern.

What causes birds to crash into buildings and windows in the first place?

“Lights seem to confuse birds and freak them out,” said Andrew Kratter, the museum’s ornithology collection manager. “All throughout birds’ evolutionary history, they’ve been accustomed to flying in dark conditions, using stars and probably features like coastlines and mountains to navigate. They’re not well adapted for bright lights.”

Taylor said birds that spend much of their time on or near the ground – ovenbirds being one example – seem to be particularly vulnerable to striking buildings. The combination of artificial lighting and glass can deliver a one-two punch: While light disorients birds, causing them to swirl in circles or drawing them to the ground, glass buildings reflect the sky, luring them closer after takeoff.

Buildings that commonly cause bird strikes are often near green spaces or water, places where birds may stop to rest, Taylor said.

As volunteers record bird deaths in Jacksonville, they upload the information to iNaturalist, one step in helping compare the city’s collisions to other places and illuminating which buildings may be most dangerous to migrating birds. The goal of Lights Out Northeast Florida is to successfully nudge building managers to decrease lighting during migration, though homeowners can also play a key role in keeping night skies dark for birds, Taylor said. “Half the problem is residential.”

Collision deaths tend to be higher during the fall because bird populations are at their peak, Kratter said.

“Most of the additional migrating birds hatched this year, and they’re just not as experienced,” he said. “They may be a month old, and all of a sudden, they’re doing a 2,500-mile-long flight.” 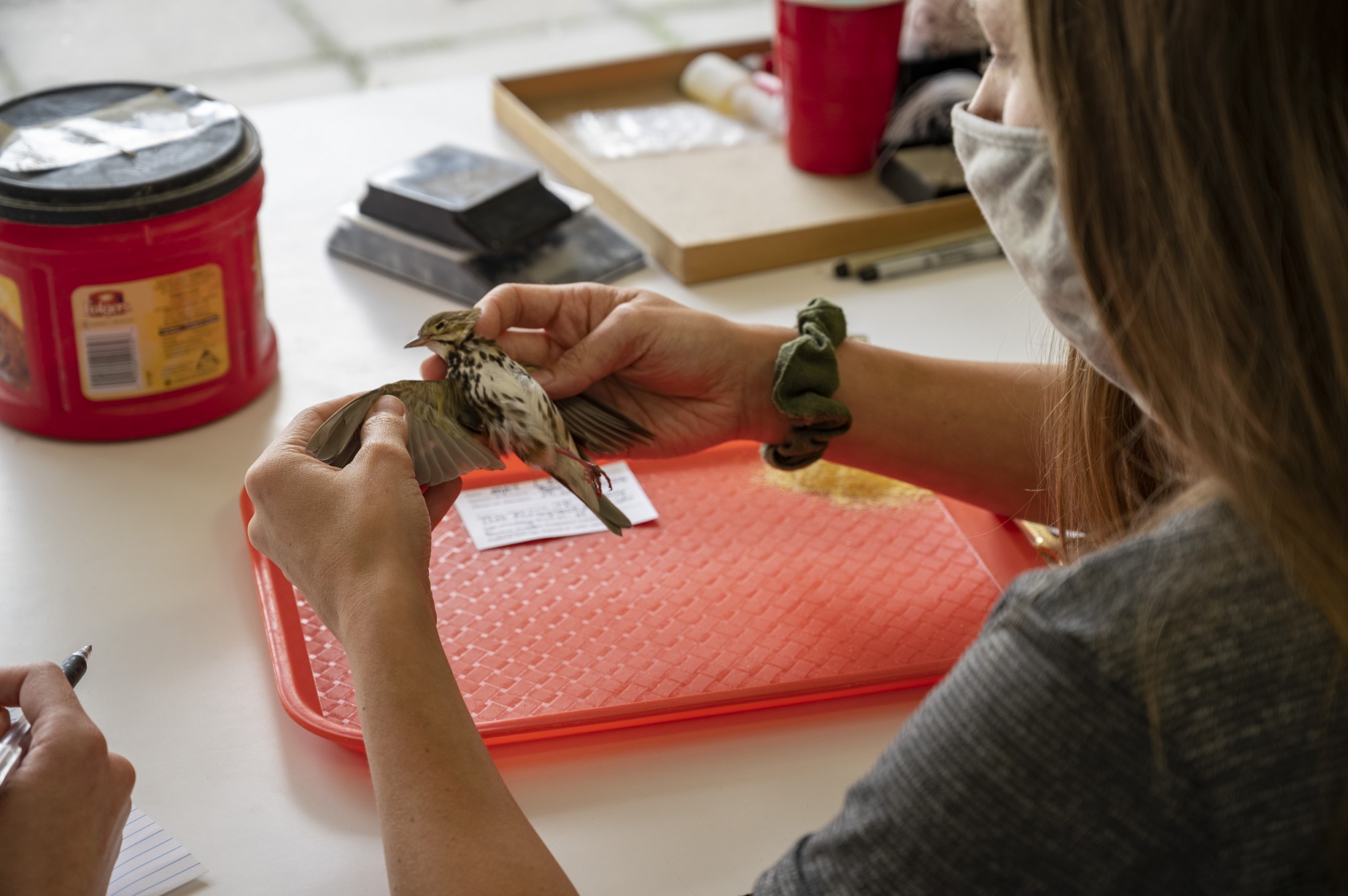 Rachel Woods, a University of Florida graduate, examines the amount of wear on an ovenbird's feathers, one of many features recorded during specimen preparation at the Florida Museum's ornithology collection. MORE PHOTOS

The University of Florida also hosts a iNaturalist project to document birds who died after crashing into buildings and windows on campus. Red-eyed vireos make up 69 of the 219 bird deaths recorded so far, followed by cedar waxwings, with 33 deaths, and common yellowthroats, with 15. Some of these birds also became museum specimens, ensuring they “didn’t die completely in vain,” Kratter said. A better understanding of the problem could help lead to solutions.

“As we gather more data on bird strikes, we might start to see some patterns,” he said. “This type of project hasn’t been done on a large scale in this part of the country.”

More information on Lights Out Northeast Florida is available on the Duval Audubon website, and Jacksonville-based volunteers can sign up here.

The images featured here were inspired by the work of photographer Jak Wonderly in a 2020 National Geographic article on birds killed by domestic cats in the U.S.