Four Things That Nearly Wiped Jacksonville Off The Map

Many people know that Jacksonville was once almost completely destroyed by fire in 1901. At least they do now. Twenty years ago, this was not widely known, but now the memory is so revived that there is even a commissioned Public Art work commemorating The Great Fire of 1901. What is not as well known is that the Historic City of Jacksonville has been completely devastated four times since 1846.

Jacksonville has been down and presumed out several times over the past 170 years, by various natural disasters and pestilences.  Strangely each visitation of near annihilation has taken elemental turns.  And each time the city has bounced back even bigger and better than before.   What follows are the four things that nearly destroyed our city. 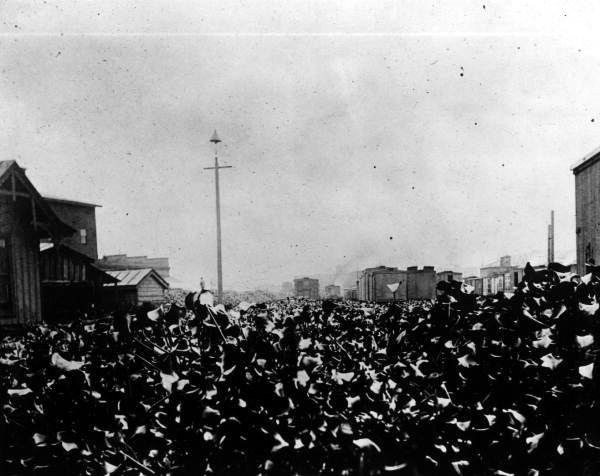 Once by Water:  Outstanding Hurricane of 1846      After ravaging Cuba on October 10-11, 1846, a powerful hurricane headed for the Florida Keys.  Gale force winds hit Key West about 10:00 in the morning of the 11th with hurricane force winds arriving about 2:00 in the afternoon.  A Lieutenant Pease rode out the hurricane with 29 other men in a small navy ship in Key West Harbor.  By 4:00 p.m., the air was so full of water that no one could face the wind.  Houses, lumber and other ships drifted by, and the sea broke over the navy ship a number of times bringing lumber and other items onboard.  Hurricane force winds abated during the night, but gale force winds continued at midnight.      Morning of the 12th found the navy ship aground on a shoal and surrounded by numerous other wrecked ships of various kinds and sizes.  Two people who had drowned were picked up but how many more drowned from the other ships was not known.  At Key West, the lighthouse was reduced to rubble, and there was a white sand beach where the lighthouse had stood.  At Sand Key, nothing was left to ever show there was a lighthouse there.  Water completely covered that bit of land.  All told, 20 people died at the two lighthouses.       The tide at Key West was five feet high and was running through the center of the town at a speed of 6 mph.  All the inhabitants of the town had run to the back part of it where the elevation was somewhat higher.  They went into the bushes, laid down and held on.  The marine hospital at Key West was a stone building, but the roof had been blown off, 32 feet of stone had washed away at one corner of it and 15 feet were gone at another corner.  Only about 6 out of 600 houses on Key West stood the storm well – the rest were either destroyed or unroofed.  Every wharf was either demolished or damaged, and all the warehouses were either destroyed or severely damaged.      The Fort on Key West was a mass of rubble, and all buildings at the Fort were destroyed.  Estimated loss to the government alone was thought to be at least $200,000.  All streets and roads were impassable as they were covered with debris from all the wrecked buildings.  All told, the number of casualties on land and from ships at and near Key West exceeded 40.      As the hurricane proceeded northward, it went between Tallahassee and Jacksonville, Florida.  Every sawmill around Jacksonville lost all logs, and every wharf at Jacksonville was destroyed, as were several buildings adjoining the St. Johns River.  The water rose 6 feet above the normal high water mark, flooding most of the stores on Bay Street which parallels St. Johns River.      Every indication is that the Outstanding Hurricane of 1846 was what would now be called a Category Five by the time it reached Jacksonville.  Contemporary accounts detail the great Wharves that lined the St. Johns River being ripped up by their moorings by the calamitous winds.  One was thrown nearly a thousand feet inland in the force of the storm.     Archaeologists at the Kingsley Plantation long wondered why historic artifacts seem to be so shallow in the ground and so little structural evidence remains of the era preceding 1850, but weather historians explain that a monster hurricane like the one that hit in 1846 carried as much as two feet of the topsoil away from several of the Sea Islands.      Little is known about how the city leadership responded to the damage, or what measures they took to rebuild, many of those records were destroyed in the Great Fire.     The wreckage was devastating, and yet it still wasn't enough to stop the steady and explosive growth of the City of Jacksonville from proceeding apace. The answer in any case boiled down to:  Rebuilding and increased trade.