Study: Jacksonville International is 2nd fastest growing airport in US

Bullet grazes back of Graham Hill's head while over downtown Jacksonville

JACKSONVILLE, Fla. – There are many dangers civilian pilots face every time they go in the air, but getting shot at doesn't usually come to mind.

But it actually happened to Graham Hill.

He said while flying over downtown on New Year's Eve with his girlfriend, Amber Born, he was hit in the back of the head by a bullet. One month later, he said he feels very lucky to have survived this brush with death.

Hill and Born said they were going up in the air to watch the New Year's fireworks from above, making for a special way to bring in 2013.

"It was really relaxed," said Born. "We were surprised that we would not be going out."

"The coolest thing is not the downtown fireworks, but the little fireworks everywhere," said Hill, 27. "It makes the city look like a coral reef."

But in an instant, five minutes before the stroke of midnight, their flight plan changed.

"We were just about across the Mathews Bridge when everything happened," said Hill, who took Channel 4 flying after the incident. "And (I heard) a loud pop and (saw) a bullet hole here. And the next thing I knew, I was bleeding down my neck."

"I hear Graham say, 'Uh, we've been shot' and he puts his hand on the back of his head and pulls it out and there's blood on it," said Born. "So my initial reaction is, how bad is it gonna be?"

Hill was bleeding badly, but remained conscious and alert. He knew he couldn't freak out.

"And Graham as the pilot in command made sure that I was OK," said Born. "And I was worried about him. My second thought was, I'm not ready to solo this plane yet."

Born is taking flying lessons. And wants to be a pilot, too, but she didn't know she'd have to take the wheel so-to-speak so soon.

"I had her take the flight controls so I could bundle up my jacket so I could try to stop and slow the bleeding," said Hill.

Hill said flying at night can be more difficult, but even though she's still in training, he's confident had the worst happened, his girlfriend could have landed the plane.

But Hill stayed at the controls, and headed back to the airport.

"Just get it down in one piece," said Hill. "Make sure that nobody's hurt and the plane comes back in one piece."

About four minutes after he was shot, Hill said he and Born touched down safely.

Born drove him to an urgent care clinic, where doctors took over, stopping the bleeding and putting five staples in the back of Hill's head. They said shrapnel went into his cheek.

The couple then called police, and filed a report with the Jacksonville Sheriff's Office and the Federal Aviation Administration.

Hill said he and his girlfriend were at about 1,200 feet high when the bullet came through their side window and up into the roof. They were over the Talleyrand area, just north of the Mathews Bridge.

Hill said he thinks he was hit by a stray bullet and the couple's plane wasn't targeted.

"Unless it was a high powered rifle I don't think they'd be able to do it," said Hill.

The pilot's head is healing, and he's back in the sky. But he's left irritated that this happened and no one's been arrested.

"(I have) just anger more than anything," said Hill. "We're up here, it's a beautiful place at night. It's a nice way to bring in new years above the city, and it got ruined because of somebody not thinking, shooting the gun up in the air."

And now he's asking for the public's help in solving this case.

"I think they might be able to find the person, the shooter," Hill told Channel 4. "It's a small, nine-block neighborhood. And I've got the bullet. So if anybody would come forward it'd be a great deal of help." 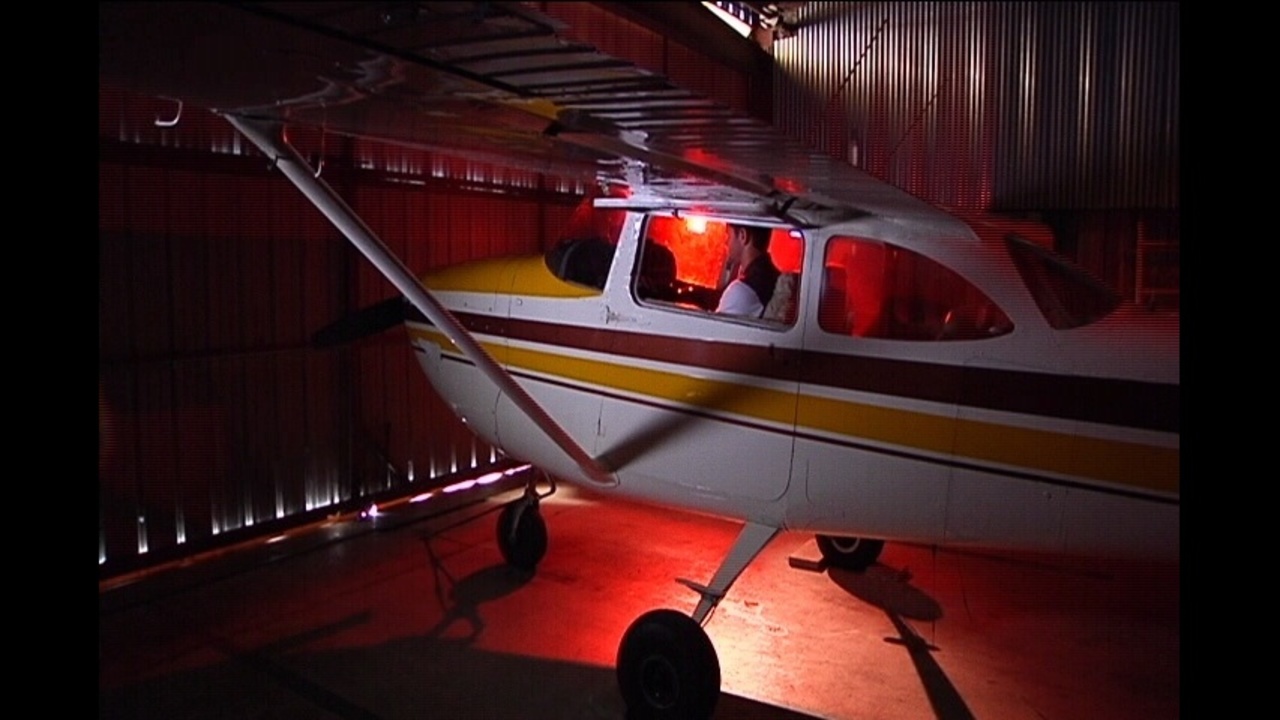 Could have ended in tragedy

Attorney Ed Booth has been a pilot for 35 years.  He said besides hitting the people inside, the bullet could have ruptured a fuel tank and or the engine.

"It could have easily caused the aircraft to explode," said Booth, who is not related to the case. "Here in the cockpit you're sitting on top of 50 gallons of highly flammable, explosive aviation gasoline.

And if the plane crashed, there were thousands in the danger zone, out and about, getting ready to watch the fireworks show on the riverbanks.

Melissa Bujeda with the Jacksonville Sheriff's Office said no one's been arrested for what happened, and whether the shot at the plane was intentional or not, it was a crime.

"It's called discharging a firearm in public and it's illegal," Bujeda said.

She said for whatever reason some people like to shoot their guns in the air on New Year's as part of the celebrations.

"We get hundreds of calls between New Year's Eve and New Year's Day," said Bujeda.

One of those calls was from the family of an 8-year-old boy, whom police said apparently was hit by a stray bullet just minutes before the stroke of midnight on the Southbank of the St. Johns River. No one's been arrested in that case either, but he's recovering, knowing it could have been much worse.

A handful of those calls came from Talleyrand -- the area Hill was flying over.

"Identifying the shooter is the real problem," said Booth, a former Jacksonville prosecutor. "In this case it will be very difficult to track this person down without some assistance from the people in the neighborhood who certainly witnessed this."

Booth said if police do track down the shooter, he or she could face serious consequences.

"Particularly since Sept. 11, any type of interference with a United States civil aircraft is dealt with very harshly," Booth said.

Under Florida state law shooting at an aircraft is a second-degree felony. Federally, if convicted, the crime could carry a punishment of up to life in prison.

Booth said he isn't sure if the plane was target or just happened to fly into the path of a stray bullet. But either way, he said at that height, hitting it is a one-in-a-million chance.

"There's more of a chance that it was just a coincidence than an actual intentional shooting," said Hill. "Because you don't know what's up there, and where it's going to go after you shoot."

Celebratory gunfire is a continuing issue for law enforcement agencies.  On the ground in downtown Jacksonville New Year's Eve, an 8-year-old boy was hit by a bullet waiting on the Southbank Riverwalk to watch the fireworks display.

The boy told his dad something hit his foot and police say a bullet was found in the child's shoe.

Celebratory gunfire has been deadly many times in nationally, including the death of an 8-year-old girl in Maryland this New Year's.

Channel 4 found four other instances where celebratory gunfire has turned deadly in the past 20 years.

Anyone with information about who's responsible for the shootings is asked to call the Jacksonville Sheriff's Office at 904-630-0500 or Crime Stoppers at 866-845-TIPS.

Copyright 2012 by News4Jax.com. All rights reserved. This material may not be published, broadcast, rewritten or redistributed.