JACKSONVILLE, Fla. – Ninety centimeters of polyflat braided rope and several plastic bags -- that's what marine biologists found in the stomach and throat of a Cuvier's beaked whale that beached itself Tuesday in St. Johns County.

The 13-foot-long mammal died. Marine biologists at Marineland performed a necropsy and discovered rope in its throat leading to its stomach.

"It's the common rope we use on boats and ships. This (rope) floating in the water looks like a fish of some kind and it tried to eat it. The animal basically starves to death because it can't eat anymore," said Dr. Quinton White, a marine biologist at Jacksonville University who talked in general about the danger rope poses to marine animals.

White said marine animals are known for their excellent sense of smell and touch, but not for their sight. They can't always tell the difference between a jellyfish or squid, which is a common food for many marine species, and a plastic bag.

"A lot of animals dolphins, sea turtles, whales, fish, we're finding them with plastic in their guts," he said.

White showed Friday on "The Morning Show" the top five pieces of trash that are the most common risks to marine animals:

Plastic bags: Like the ones you get at the grocery store and the bags used to store sandwiches and chips.

Styrofoam cups: Styrofoam is not biodegradable. It breaks down into small pieces that get eaten and then can get trapped in a fish's gills. 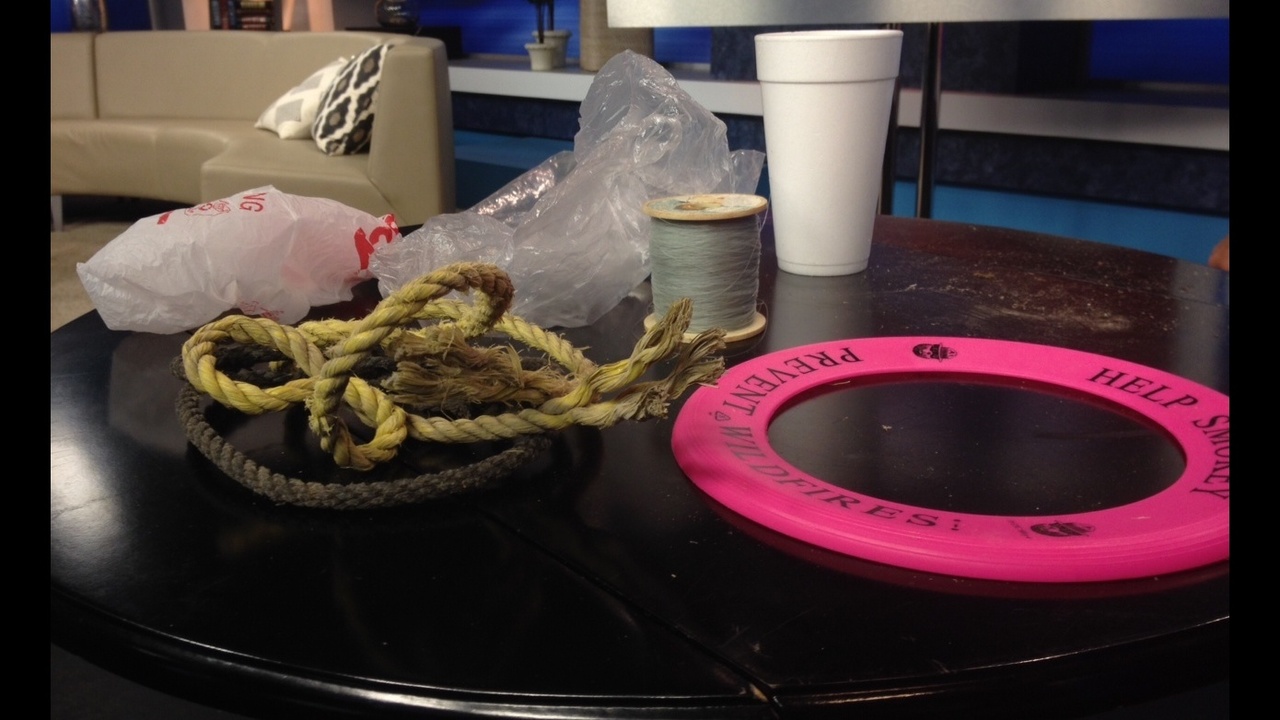 Monofilament line: Also known as fishing line, is a major problem with entanglement.

Marine rope: Like what's used by fishermen and boaters, can be confused with food.

Frisbees: The kind that has a large hole in the middle (pictured). White found a dolphin in the St. Johns River that had one around it's head.

How to prevent your trash from winding up in the ocean:

"When you see pieces of trash, particularly plastic, pick it up if it's on the ground because it will eventually end up in the ocean," said White.

If you can, take your trash home with you if you go to the beach. Overflowing trash cans or a brisk wind can carry plastic bags out to sea even if they are in the garbage cans that line beach accesses.

Try to use reusable bags at the grocery store, instead of plastic.

If you spot a marine animal that has beached itself along our shoreline, there is an app you can use to report it. It's called dolphin and whale 99.