Local activists speak out about mass shooting in Buffalo

Dozens of people without a home because of apartment fire

JSO: One person dead after shooting in Downtown Jacksonville

Keep tabs on your home with this affordable smart cam

JACKSONVILLE, Fla. – Police have arrested William Ebron, the boyfriend of 21-month-old Lonzie Barton's mother and the person who was taking care of the toddler when he disappeared early Friday morning.

Ebron, 32, was booked into the Duval County jail late Friday and charged with two counts of child neglect. He is scheduled to have a first appearance before a judge at 1 p.m. Saturday.

Ebron told police he was preparing pick Lonzie's mother, Lonna Barton, from her job as a dancer at Wacko's Gentlemen's Club, putting the toddler and his 5-year-old sister in the car. Police said Ebron claimed he went back inside his home to grab something and when he came back outside, someone was driving off in his car with Lonzie inside of it.

Police said Ebron was in custody most of Friday for questioning, adding that getting information from him was "like pulling teeth." Just before midnight, he was arrested.

Ebron has a long list of prior arrests, including:

There is also a petition for a restraining order against Ebron that was filed on July 10, but it did not involved Lonna Barton or her children.

"He's had run-ins with law enforcement before, some are troublesome. And that may lead him to some issues here later on, whether it's related to this abduction or not, it's hard to say," JSO Chief Tom Hackney said on Friday afternoon, before his Ebron's arrest.

Court documents show that Ebron's ex-girlfriend and her family had filed injunction for protection orders against him at least three times.

In the most recent, filed in July, that ex-girlfriend's sister, who asked not to be identified, said Ebron had stalked her and harassed family members. She said Ebron had left threatening voice mails, threatened her daughter, and in 2008 she said Ebron became violent, cracking three of her ribs and raping her sister.

She went on to say that Ebron brags about being "untouchable to the police and court system," and claims that he "can get away with anything he does to me, my children, and my sister and her children." 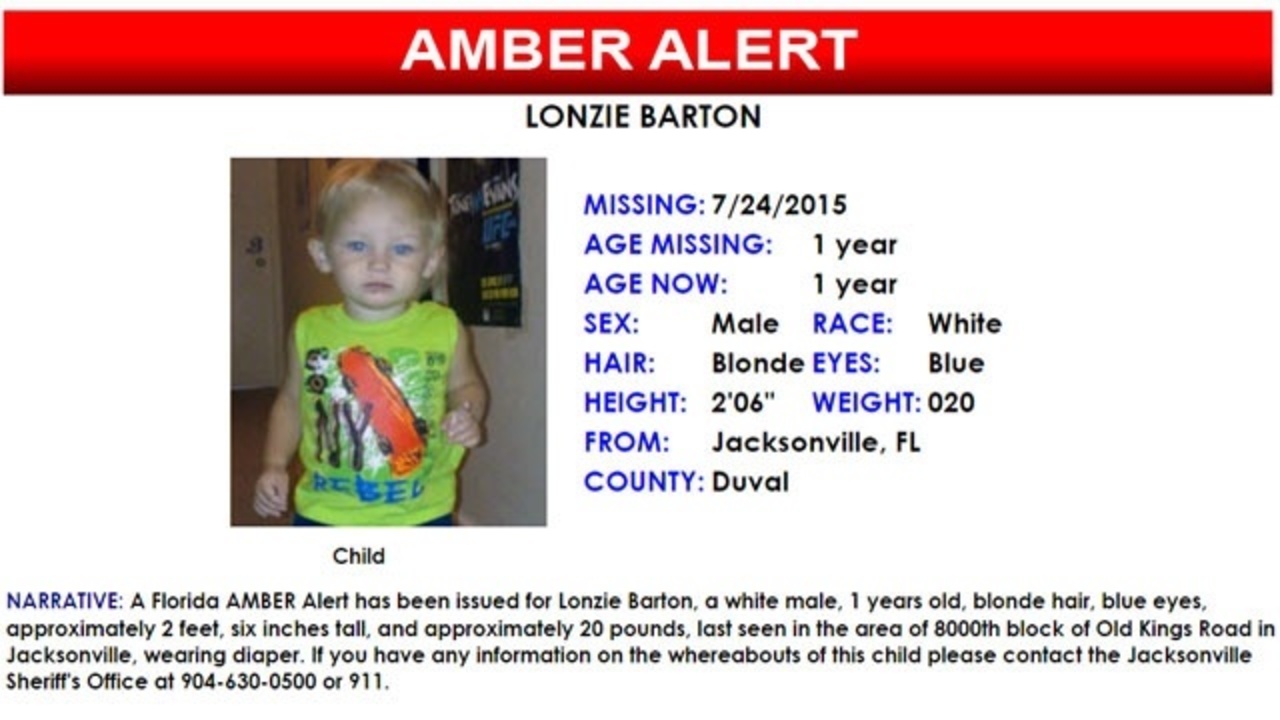 As the search Lonzie continues, the Jacksonville Sheriff's Office is trying to follow any avenue possible that would lead them to the boy, including looking into the backgrounds of everyone in the little boy's life.

Police records show that Lonna Barton has drug possession charges pending against her from a May incident in Baker County. Ebron was with her at the time.

Shirley Barton, the aunt of Lonzie's father, Christopher Barton, said that there had been some custody issues between her nephew and Lonzie's mother Lonna Barton, since the couple separated a couple of months before.

Christopher, 40, was married to 25-year-old Lonna Barton, whose maiden name is Lauramore, for about five years but they have been separated for two months, Shirley Barton said.

As for Lonzie's father, Shirley Barton said he doesn't own a car and she knows logistically he could not have abducted his son, and wouldn't do something like that.

Shirley Barton described Lonzie as a sweet little boy who is named after his maternal grandfather.

Most of Christopher Barton's family is from Baker County. He is currently in Jacksonville with his father while the search continues for the toddler.

Tina Lauramore, the missing boys' aunt, posted on Facebook, "Thank you very much, prayers are appreciated! Lord knows we've have already went through this before when another one of my cousin's daughters was abducted, Haleigh Cummings, this hits home very hard for us all."

News4Jax tried to reach out to Haleigh Cummings' family to find out more about the relationship but haven't heard back. Haleigh's grandmother is from Baker County.

Again, police said the mother and the child's father are not considered suspects. At this point, they are victims looking for Lonzie and are being cooperative with police.