Damage assesment will be given on Ian.

ORANGE PARK, Fla. – A man on trial for killing a Navy commander in an Orange Park hotel room two years ago told a jury Thursday he had developed a romantic relationship with the man's estranged wife he went there to intimidate the man, not kill him.

Anthony Washington is charged with one count of first-degree murder and one count of burglary with assault or battery in the death of Alfonso Doss. Doss' estranged wife, Yolinda, and another man, Ronnie Wilson II, are also accused in Doss' death.

Doss was strangled in a room at the Astoria Hotel in February 2014.

Washington admitted going to the Doss' room that night, but said things got out of hand and Doss attacked him and he fought back. He said he did not intend to kill Doss, but when the man lunged at him, he caught him by the next and threw him against the wall.

"He was climbing on the bed. As he was climbing on the bed, he goes to lunge and attack me, saying, 'I hate you,' or, 'I’m going to kill you,' or something like that," Washington said. "After he’s lunging, I catch him in midair.  When I catch him in midair, he tries to hit me with a bottle, I slapped the bottle out of his hand. I throw him. When I throw him he lands kind of awkwardly on his side with his back hitting the wall."

During about three hours of testimony, Washington also portrayed Doss as a drunk and abusive toward his wife.

The state attorney hammered Washington over what he called multiple lies  he told police. Washington said he was unaware he was unaware Yolinda Doss was across the street during the attack. Prosecutors also asked about the third suspect, Wilson, who prosecutors said was waiting at the door, possibly as a lookout. They also grilled him on the claim that Doss swung a bottle, but no bottle was found in the room.

During Washington's testimony, his defense attorneys asked for a mistrial over claims that jurors appeared to be sharing notes. The judge reminded two jurors they were not allowed to do that.

The prosecution rested its case on Wednesday. While making its case, prosecutors replayed interrogations investigators had with Washington after the killing.

Six months later, he was back in the interrogation room as investigators told him they talked to Doss' wife and need to “clear some things up.”

Washington tried to stick to his first story, prosecutors said, but eventually, as investigators gave him some of the details they had through surveillance videos and other interviews, he gave a different version.

But it still wasn't his final version, prosecutors said.

Washington finally told investigators that he was hiding in the room, waiting for Doss to return.

Washington said he wanted to scare him for the way Doss treated his estranged wife. Eventually, Washington gave investigators more details about what happened inside the hotel room, including that he had Doss by the neck for 5 to 10 seconds.

“When I threw him on the bed, just him struggling, for whatever. I was like, 'Man, he tripping. I guess he drunk,” Washington said. “He gonna do something. He pulled all that stuff, just grabbing for whatever he could off the bed.”

Washington told investigators that he took a breathing machine out of Doss’ room. He said he took it because Doss threw it, and he wanted to take it out of spite. 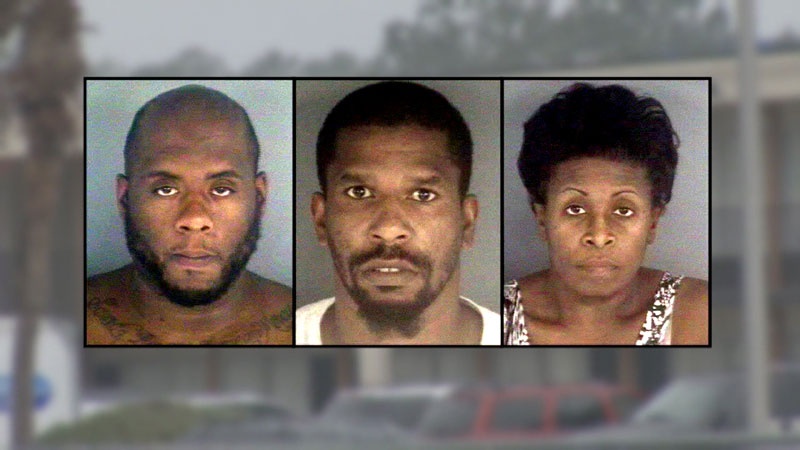 Prosecutors said Tuesday that Doss' death was an elaborate setup that involved Washington waiting in a room at the Astoria Hotel for Doss to return.

Investigators said that Washington, Yolinda Doss and Wilson plotted to kill Alphonso Doss so that Ms. Doss could cash in on a $1 million life insurance policy. They said Washington and Wilson tried to make the killing look like it happened during a burglary while Yolinda Doss served as a lookout.

The commander’s father was in court Tuesday and did not leave the courtroom, despite the sometimes graphic pictures that were shown. He did appear emotional at times.

Defense attorneys for Washington tried to focus on Doss’ alcohol use as they addressed jurors.

It is expected that Washington will take the stand at some point Thursday as the defense begins to make its case.

"He is becoming more and more inconvenient," Yolinda Doss allegedly wrote about her husband in a text message found among the deleted messages on her phone. It was sent little more than a month before he was strangled to death.

Based on height, investigators believe the two people to be Washington and Wilson. At that same time, phone records reveal the phone believed to be used by Washington placed a call to Yolinda Doss' cellphone.

Minutes after Cmdr. Doss enters the room, Yolinda Doss goes into the lobby to drop off his mail. At 4:49 p.m. two people are seen exiting room 183, then one minute later the silver Nissan Titan is seen leaving the Astoria Hotel parking lot.

Both men told investigators they were at the gym, then at Washinton's parents house, but investigators found out Washington's father owns a silver Nissan Titan, which he lets his son use.