’I feel like shooting up the school’: Teen girl in Flagler County arrested after text threat

A mission to help military veterans and their families

JDog: 'We served our country, now we service our community'

JACKSONVILLE, Fla. – They dedicate part of their lives to serving their country, but some veterans can struggle to find good jobs once in the civilian world. It's why a company called JDog Junk Removal and Hauling was started: to give veterans and their families a place to work and continue with the military way.

"Anything JDog can do to help out other veterans with employment opportunities, that's what we are all about," said Mike Getka, a Navy veteran and a JDog supervisor in Jacksonville.

We recently joined Getka and his crew at a demolition job in Atlantic Beach. Although he and all of the employees he manages are used to working hard, the day we went with them was a particularly tough.

Getka said, "So we have some appliances that we are going to remove today. Some shiplap wood that we are also just removing from the house here."

Some of the loads were cumbersome and heavy, but it's nothing compared to what these workers used to do for a living. Each either served in the military or has family that did, with some having served in combat zones.

Now they work for JDog Junk Removal, a nationwide company that makes it its business to hire veterans and their families.

"I was in the Navy 21 years and what I love about JDog being veteran owned and operated is that you are still working with that personnel that I'm used to." Getka told us.

He's talking about personnel like Army veteran Rob Dennis and Navy veteran Mike Haire. Each own a local JDog franchise, and both agree, when you hire military veterans, customers notice.

"We've all gone through the same thing together," Dennis explained. "Whether you are in the Army, the Navy, National Guard or Marines, there is a thread that bonds all of us together. And, it's especially vets who have been out for a few years and they start working for JDog, that's one of the biggest things they respect."

Dennis owns the JDog franchise in Jacksonville and Haire owns the franchise in St. Augustine. Both said their experience in the military allows them to handle almost any situation a civilian job throws their way.

"We are here putting in long days, doing manual labor and lifting things up to 400 pounds. But when you look at it that I survived doing these different things in a war zone, there's no way that I cannot handle what I am currently doing and I am able to help the community as I am doing it," Haire explained.

"There's a process that you learn in the military. From the start of the day to the middle and to the end of the day. That's helped us be good business owners," said Dennis.

And that brings us to the other part of JDog's mission. The company aims to repurpose or recycle 60 to 80 percent of everything they collect. From that demolition job we went to in Atlantic Beach, everything was taken to a sorting center. Some of it will be recycled, but much of it will also be donated. Some pieces will even become pieces of art.

"We recycle all of the cardboard. That will get bundled. Any clothing or textiles will get bundled and sent overseas to countries that need them. All of the Lumber will be repurposed. We just recently donated lumber to HabJjax," Dennis explained.

They also use the JDog equipment and their personal time to help veterans in the community who are in need. After Hurricane Matthew, a local family lost all of their furniture. Several people donated furniture to help them out, and then JDog did the heavy lifting.

Haire said, "I went and picked those up and delivered those items free of charge to all parties just to be able to help that family out."

"Recently we hired a local Jax naval vet who was having a hard time in his life. When he came to work for us, he immediately felt a sense of ease because he was with others who had gone through similar experiences as he was," said Dennis. "We provide an opportunity for veterans to have good-paying jobs, and the sky is the limit on their growth." 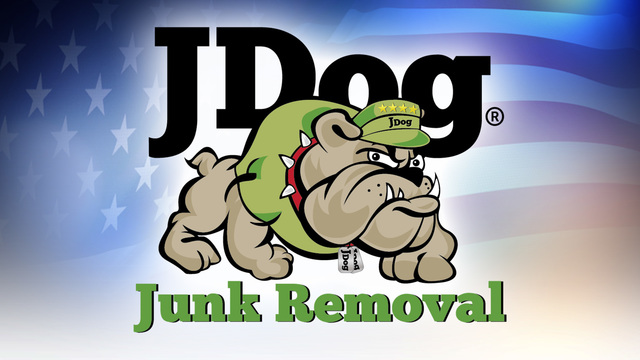 JDog's founders started with this message, and it's woven into each and every franchise: 'We served our country, now we service our community."