Constantly getting political texts? Here’s what you should know.

When does a pattern feel like a rut? Rinse. Wash. Repeat.

Helping the Helpers: Suggestions from caregivers to prevent caregiver burnout

JACKSONVILLE, Fla. – Three people under the age of 20 were killed Tuesday night when someone pulled alongside a silver Chevrolet Cruze on Town Center Parkway just before 11 p.m. and opened fire. A fourth occupant was also shot, but survived.

Friends identified the surviving victim as 20-year-old Kenyata Bullard, Trevon's older brother. At last check, he remained hospitalized in serious condition. A family friend said Kenyata Bullard, who goes by the nickname Ace, is an aspiring rap artist who posts his videos on YouTube

The Sheriff's Office said detectives have determined that the teenagers were targeted based on an ongoing dispute between two groups and the shooting was not a random act of violence.

Sheriff Mike Williams told News4Jax that two of the four men shot have ties to a known gang.

"Not a random act of violence, obviously," Williams said. "It's a tragedy, but one that could have been avoided."

Based on social media posts, it appears the four victims were at nearby restaurant celebrating a friend's birthday party. Williams said apparently the rival group followed them to the area.

Groover played football at University Christian, then Lee, wearing No. 4.

"It made me sick to my stomach," said David Penland, who was Groover's Coach at University Christian. "I started texting all his former teammates and all the guys I knew were close with him."

"He was a good kid. I didn't have any issues with him. He was always smiling. All his teammates loved him," Penland said. "He died too young."

A former neighbor said he was an awesome, sweet kid.

"He was always outside with his friends talking ... always very sweet, polite, well-mannered," the neighbor told News4Jax.

“I saw him at school all the time because all the my friends played football and he was on the football team," former classmate Jeffrey Dead said.

Kshawn Price, who graduated with Trevon Bullard, said he learned about his death through social media.

"I went on my Instagram and it was all over my feed. It was crazy," Kshawn Price said. "I was just shocked. When I heard about it, my heart dropped. I was, like, 'Bro, I was just with him. I just saw him.'"

Jayden Price knew both Bullard brothers. He said he learned about the shooting from classmates when he went to school Wednesday morning.

Clay County court documents show Kenyata Bullard was, at one time, under investigation as a suspect in an incident involving shots being fired. According to an arrest warrant, he was charged in connection to shots being fired during a suspected drug deal involving other co-defendants.

Jacksonville homicide detectives have not said what led to the violence, but investigators said at least one person in the second vehicle opened fire before driving off. Investigators were not sure if shots were exchanged between the two vehicles.

Homicide detectives said this does not appear to be a case of road rage.

There was no description of the vehicle that sped away or of who fired the shots. Police were looking through video recorded by surveillance cameras in the area, trying to learn more. 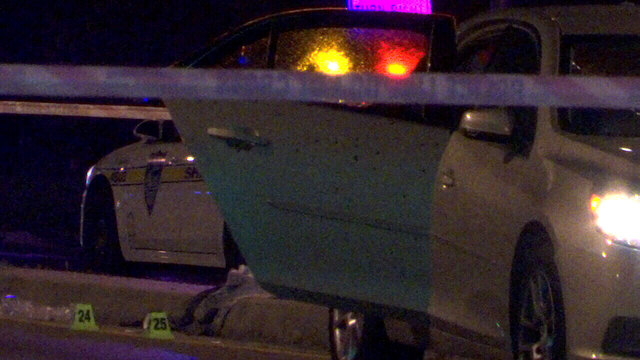 The two businesses closest to the shooting scene, Baptist Emergency Center and the Gate gas station, both told News4Jax that any surveillance video recorded of the incident would have been turned over to investigators. The Baptist ER said it was put on a brief lockdown after of the shooting, but resumed full operations quickly.

The University of North Florida sent out an emergency alert early Wednesday morning letting students and staff know it happened near the main entrance to campus, but police did not believe the shooting was connected to UNF.

"It is unusual for this location, however it could occur anywhere. We aren't sure what the background is," Lt. Craig Waldrup said.

Anyone with information about the shooting is asked to contact Crime Stoppers at 866-845-TIPS. Callers can remain anonymous, and information leading to an arrest may be eligible for a cash reward.

A small piece of crime scene tape is one of few reminders that remain of Tuesday night’s quadruple shooting. Learning that three were shot and killed on the road connecting UNF to one of Jacksonville's most-popular shopping areas came as a surprise to many people who passed the area Wednesday.

Tens of thousands of cars travel daily through the shopping district less than a quarter mile from where the shooting happened. Some told News4Jax that last night’s shooting will make them much more aware of what’s happening around them while they drive.

"Just surprising because it (is) such a busy area," said David Opdycke, who regularly shops in the area. "You don’t expect to see that kind of thing here in the Town Center."

"I was just really glad that my store was closed, none of my friends were working nearby and that a lot of the area was closed at that time," said Jennifer Brady, who works in the St Johns Town Center. "So that was really good."

Based on JSO's crime mapping system, in the past six months, within a half-mile radius, there were:

A woman who shops in the area was upset to learn of the quadruple shooting.

'We're moving pretty soon because of all the crazy crime activity around here," Casie Butzirus said.

Many people in the area Wednesday said they still feel safe, but will be relieved once someone is caught.

"The area is kind of quiet, but we never know who is around really," said Pepé Cueba, who works in the area. "I have kids and, you never know what could happen anytime."