Damage assesment will be given on Ian.

JACKSONVILLE, Fla. – Our eyes often turn to the spouse of a candidate, to see what makes them tick. In the race for governor of Florida, the wives play a role, potentially becoming first lady of the state.

Mary Baer brings us a look inside the lives of the candidates, beginning with a sit-down interview with former News4Jax anchor Casey DeSantis.

Casey DeSantis: "He (Ron DeSantis) is a smart guy who's dedicated to the principals in which this country was founded, and when he said, 'You know what? I want to serve this state,' I stood by him 110 percent, and I couldn't be more proud." 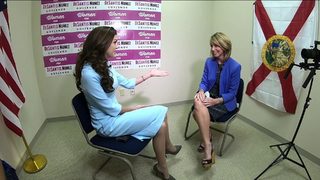 Mary Baer: When you met though, you met this guy Ron, did you have any idea you'd be heading down this road?

Casey DeSantis: "Heck no. No way. We met at the University of North Florida -- the driving range."

Both were trying to work on their golf game, when apparently he thought she was eyeing him.

That's when the two began talking, and the rest is history. Marriage, politics and parenthood at the height of the run for governor. The couple has two children, 23-month-old Madison and 7-month-old Mason, both standing behind their father in the race.

Casey DeSantis: "They have fun on the campaign trail, they really do. I think they enjoy getting out and ... for him to be able to be with the kids, I mean you can just see him light up. It's fun to be out there together as a family."

The DeSantis family was featured prominently in one campaign ad that was a real attention-getter for both supporters and opponents.

Casey DeSantis: "I think a lot of people looked at it, and they thought it was funny they saw the humor. You have to understand, in context, perspective, when this ad was coming out, there was $17 million in negative attack ads coming out against Ron. False, fake terrible attack ads. So how did we respond? With humor. We had some fun, and I think a lot of people got the joke."

Mary Baer: How does it feel, I've always wondered this, when they're so many negative ads out there, and that is just, it's just the weapon. How they play the game. Attack, attack, attack, attack. How does that feel when it's your husband they're talking about?"

Casey DeSantis: "I'm really not watching a lot of cable and broadcast news, you know, to be honest with you. I am just committed. I know Ron is a great man. I know his story. I know that he's a guy that came from humble roots and a humble beginning. He worked his way through Yale University and Harvard Law School ... I know he's a man of integrity, of honor, of values. He's a tremendous husband and a wonderful father. So, I don't pay attention to the lies out there. I know he's a good man, and I'm committed 100 percent to telling as many people as I can about who Ron is between now and election day.

Mary Baer: What if (you) don't win, what next? Do you think about that at this stage at all?