KINGS BAY, Ga. – The tornado that barreled through Southeast Georgia over the weekend was the strongest to hit the Jacksonville area in recent memory.

According to the National Weather Service, the EF-3 tornado was packing 144-mph winds when it touched down Sunday at Naval Submarine Base Kings Bay.

Meteorologists said the tornado was 900 yards wide and was on the ground for 7.5 miles.

Damage consistent with that of an EF-3 tornado was found at the base, and the tornado's strength was confirmed by a 144-mph maximum wind gust measurement from a docked Coast Guard vessel.

Four people received minor injuries as the tornado came through about 3 p.m. Sunday.

“There were four injured personnel that were transported to local hospitals,” said Capt. Chester Parks, of SERVICE, who added the victims were treated for cuts and leg injuries.

The tornado came through as part of severe storms that crossed southeast Georgia around 3 p.m., damaging the base, among other things. 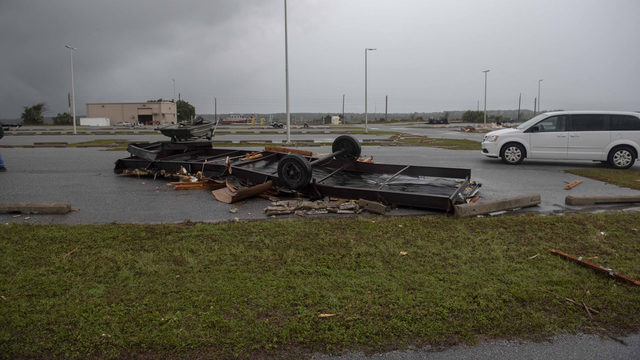 "The damage from afternoon storms included the southernmost pier, known as Site 6, at least one pole and vehicles on base," Naval Submarine Base Kings Bay public information officer Scott Bassett said.

Bassett said there were no reports of damage to any submarines.

The tornado's path continued east across Cumberland Sound and caused damage around Old Horse Road and Parallel Trail south of Stafford Beach Road, according to a spokeswoman for the Cumberland Island National Seashore.

With a significant number of trees down, trails in the area are closed until further notice.

“Trees and other natural resources will recover,” said Superintendent  Gary Ingram.  “We are very thankful there were no injuries from this dangerous weather event. We ask for your patience at this time as we work to clear the affected areas from debris.”

Several dirt roads, including Kirkland, Swamp and West roads, are washed out. (Photo at right provided by the Ware County School District)

There are no reports of downed trees or power lines.

Crews were out Monday morning evaluating the roads and will be checking out conditions to see if they will be passable.

Ware was among several counties to close schools Monday because of the weather. It's schools will remain closed Tuesday.

"We are grateful to all of the city, county and state agencies who work in cooperation to keep our students and staff safe," Ware County school posted on its Facebook page.

Emergency management officials in Brantley County are asking residents to share pictures of washed out or impassable roads on the EOC Facebook page: www.facebook.com/brantleyema/.

The Road Department is out surveying the roads and closing those that need to be Monday. As soon as officials have a list of the closed roads they will post it to the Facebook page and keep residents updated.

If your road is impassable, call the BOC at 912-462-5256 to make sure a work order is made, this will help officials keep an accurate account of the damages.

The road conditions prompted the closure of schools in Brantley County on Monday. Officials said conditions will be monitored to determine if school will be in session on Tuesday.

Officials are also asking residents with a rain gauge to post their address and amount of rain on the Facebook page.

The University of Georgia gauge at ZBlu farms in Nahunta is reporting a three-day total of 7.19 inches. Brantley County officials have 9.5 inches in their gauge in the City of Nahunta.

Also, garbage may not be picked up in a timely manner due to the road conditions. Garbage issues are also reported to the BOC.

To receive alerts from the Brantley County Emergency Management Agency, text @bcema to 81010 on your mobile phone or sign-up online at remind.com/join/bcema.