Dumpsters at Arlington condo complex not emptied for weeks

JACKSONVILLE, Fla. – Former Republican U.S. Rep. Ron DeSantis was sworn in as Florida's new governor on Tuesday with promises to keep taxes low and to make schools and the environment a priority.

The 40-year-old from Ponte Vedra Beach did not break any new ground in his inauguration speech but used the 16-minute address filled with naval references to broadly outline his agenda. He pledged to keep Florida a low-tax state, be tough on illegal immigration, to improve water quality and to end “judicial activism.”

DeSantis, a Jacksonville native who spent three terms in Congress representing parts of St. Johns County and beyond, took his oath in front of Florida's historic Old Capitol. His predecessor, Republican Gov. Rick Scott attended, along with former Republican Govs. Jeb Bush and Bob Martinez and former Democratic Gov. Bob Graham. Scott was to be sworn in as a U.S. senator later in the day.

During his inaugural address, DeSantis praised Scott's work over the previous four years.

"Your laser-like focus on improving Florida's economy has meant so much in the lives of so many here in our state.  You are leaving a strong foundation from which we here today can build," DeSantis said. "It now falls to me to build upon the foundation that has been laid, navigate the challenges - economic, environmental, constitutional -- that lie ahead, and steer Florida to a stronger, cleaner and safer future."

DeSantis, with strong support from President Donald Trump, defeated Democrat Andrew Gillum to win the seat.  He will work with a firm Republican majority in both branches of the Legislature.

"Let's promote a virtuous cycle whereby low taxes, a reasonable regulatory climate, a sensible legal system and a healthy environment attract jobs, businesses and investment -- particularly in the areas of technology, manufacturing and finance," he said.

After three terms in the U.S. House, DeSantis joked that he knows his way around the process, even though he hasn't worked much with state government.

"I mentioned in my speech that I'm A recovering U.S. congressman. That means that I have experience in the legislative branch," he said. 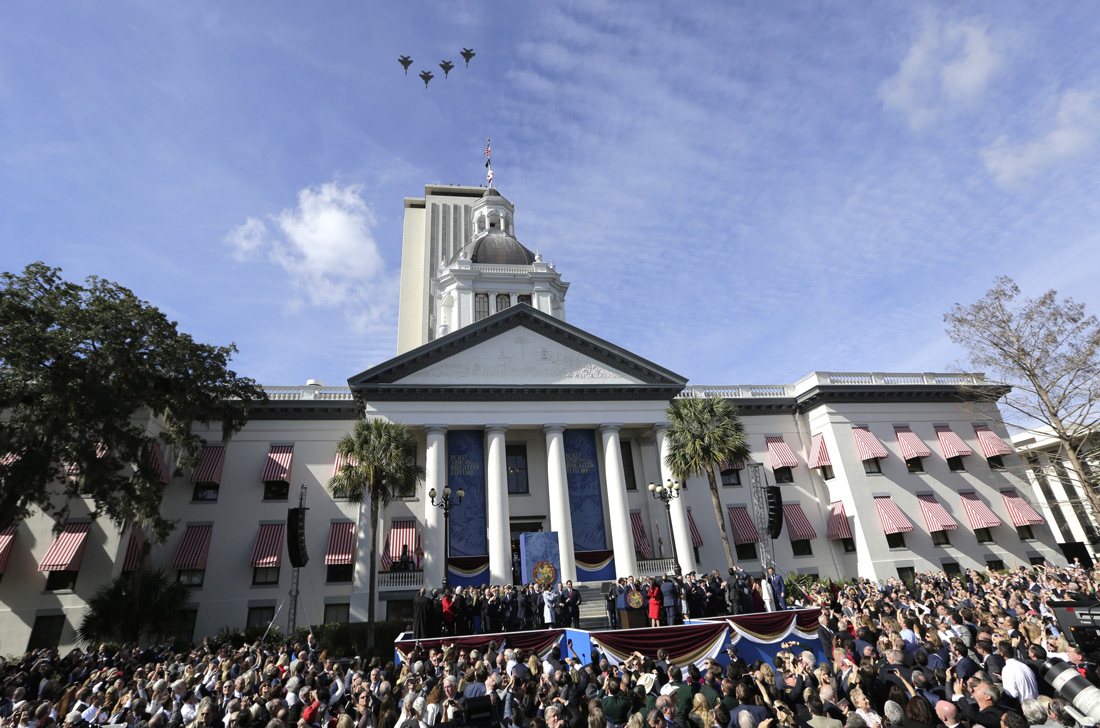 The new governor also said the environment will be a high priority, citing the need to eliminate toxic algae that grow from Lake Okeechobee pollutants and to address red tide off the state's coast.

"For Florida, the quality of our water and environmental surroundings are foundational to our prosperity as a state." he said. "It doesn't just drive tourism; it affects property values, anchors many local economies and is central to our quality of life. The water is part and parcel of Florida's DNA.  Protecting it is the smart thing to do, but it's also the right thing to do."

DeSantis, 40, is the youngest governor ever elected and the first to live in the governor's mansion with young children in a half-century. He decided to forgo the traditional inaugural parade. Instead, he and his wife, Casey, will hold a baptism ceremony at the mansion for their 9-month-old son, Mason.

DeSantis is expected to take swift action in the next week on a number of issues. He will appoint the first of three Supreme Court justices on Wednesday and decide whether to suspend Broward County Sheriff Scott Israel. Israel has been criticized for the performance of his deputies during the Feb. 14 shooting at Marjory Stoneman Douglas High School that left 17 people dead. He also has hinted he might take action against other officials.

No everyone in the shadow of the state Capitol on Tuesday has there to applaud the new administration. Members of the group Dream Defenders watched from outside the gates.

“We're here to make sure he's not playing games,” said Rachel Gilmer. "You know, he can't talk a game that he's for working people, that he's for Floridians when he isn't. So we're here to actually hold him accountable and make sure that people know that this Governor is not for you.”

Others, including Pastor R.B. Holmes, who gave the closing prayer at the ceremony, were more optimistic.

"This is a young governor,” said Reverand Holmes. "He's trying to bring this community together, to stick together. I think he can do it if he continues to reach out and hold out the olive branch and he's doing that.”

While opinions may have been divided, DeSantis spoke of overcoming the tribalism in the state, saying, “We will see that rising sun.”

DeSantis' victory was delayed by a mandatory recount following the close election. His margin of victory was 32,463 out of more than 7 millions votes cast.

DeSantis gave a preview of his priorities during pre-inaugural events Monday, saying that he's going to act quickly on a number of issues once the pomp and circumstances of the inauguration are over.

At a luncheon following the inauguration, he was welcomed by the Republican leadership of both the state House and Senate.

"On behalf of the entire House of Representatives, we congratulate you on becoming our governor. We thank you. Want to let you know that we were encouraged by your opening remarks today," said Jose Oliva, Speaker of the House.

And so I toast to the beginning of a new era," Senate President Bill Galvano said. "Here here!"