4th of July is dry for most everyone

Defense rests after Michael Haim testifies: 'I would never hurt my wife'

26 years after Bonnie Haim disappeared, her husband on trial in her death

JACKSONVILLE, Fla. – The man accused of killing his wife a quarter century ago took the stand in his murder trial Thursday afternoon and said: "I loved my wife. I would never hurt my wife."

Michael Haim is accused of second-degree murder in the death of Bonnie Haim. Police considered him their prime suspect since her disappearance in January 1993, but they didn't have enough evidence to charge him until their now-grown son unearthed his 23-year-old wife's remains while ripping out the pool and outdoor shower while renovating the property for sale in 2014.

After more than two days of hearing from prosecution witnesses and the testimony of three defense witnesses Thursday afternoon, Circuit Judge Steven Whittington asked Michael Haim if he wanted to take the stand before the defense rested. Everyone, including his lawyers, seemed surprised when he said yes.

Haim's attorney led him through details of the night his wife disappeared and the next days and weeks. Haim began answering questions from the defense attorney, who asked about Bonnie Haim's state of mind during the last conversation they had together in January 1993.

”She’d been unhappy, for maybe a month maybe two. I can’t put my finger on how long, but it had been going on where she wasn’t her bubbly self like she was," Michael Haim said.

Michael Haim described his reaction to his wife leaving the house late at night, saying that he searched for her in the days following her disappearance and that people testifying that he was “nonchalant” were wrong. He claimed he was shocked and didn’t understand why she was gone.

To end the questioning from his attorney, Tom Fallis, Michael Haim responded to the witnesses testifying against him.

Lawyer: "Basically, everybody wants to know: did you in fact harm your wife?"
Michael Haim: "Absolutely not. I loved my wife, and I would never hurt my wife."

Michael Haim got animated when questioned about not speaking to close family co-workers shortly after Bonnie’s disappearance.

The prosecutor went after Michael Haim’s testimony in cross-examination, without getting an emotional reaction from Haim.

The State Attorney’s Office wrapped its cross-examination by asking Michael Haim if he felt at all responsible for Bonnie Haim’s murder. He answered, "No."

After court, Fallis told News4Jax, "Never advise a client what to do. They make their own decisions.”

Court dismissed after Michael Haim's testimony, and the case could go to the jury on Friday.

Earlier Thursday, Dr. Heather Walsh-Haney spent two hours on the stand. She answered questions about what she found and what she could learn from the remains -- including a circular injury on the woman's pelvic bone and a .22-caliber slug found that could have caused it.

Haim's defense fought any suggestion that it could be proven that the injury, which they called a "defect," was from a bullet or that the body was moved at some point after her death.

On Wednesday, two inmates testified that Haim confessed to killing his wife while he was in jail with them in 2015.

"He started talking about, you know, how he killed his wife. How he choked her, how her son was mad at him. He buried her in the yard," Terrance Richardson said.

But for every minute Richardson and the second inmate, Keshaun Callwood, answered questions for the prosecution, the defense spent at least two minutes detailing their arrest records, the aliases they have used and their histories of not telling the truth.

One of the inmates said that, even though he is a 300-pound man, he feared for his safety when he shared a cell with Michael Haim. 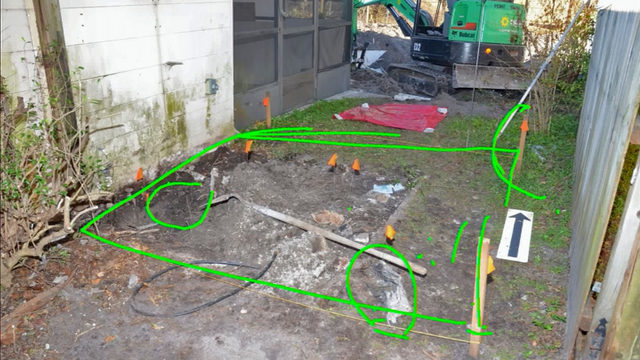 Much of Wednesday's testimony concerned forensic evidence, including graphic photos of the recovery of Bonnie Haim's remains.

Former Florida Department of Law Enforcement agents and a retired Jacksonville detective reviewed crime-scene photos of the recovery of Bonne Haim's remains in 2014, plus evidence of the recovery of her purse and abandoned car near Jacksonville International Airport in the first hours after she was reported missing a quarter-century ago.

Lawyer: "Are you able, as you sit here today, to say that the body was not in the yard on March 17th (1993) when you did that search?"
Miller: "I can't say, No."
Lawyer: "Is it significantly possible you missed her?"
Miller: "Oh, yes."
Lawyer: "Why do you say that?'
Miller: "Well, for one, she was found under the pallet. Her remains were found under the pallet.  And we didn't search under that. There was nothing about that that led us to believe it had ever been moved."

Haim's defense attorney, Janis Warren, told the jury Tuesday that prosecutors do not have enough evidence to prove his guilt beyond a reasonable doubt.

"We agree she's dead. We agree that's her body in the backyard. But they have to prove to you that he did it," she said.