Jacksonville airmen to be honored on 125th Fighter Wing Day

Tom Wills gets COVID-19 vaccine, encourages others to do the same

Thawed COVID-19 vaccine is perishable. What to do with leftover shots?

8 Florida men accused of participating in siege on Capitol, so far

JACKSONVILLE, Fla. – Preventing shootings and murders is the goal of Cure Violence as it says Jacksonville's Eastside and Northside neighborhoods are becoming more peaceful.

"That's the type of thing that we are looking for -- to be able to pull together good periods of time where there is peace in the neighborhood," Cook told News4Jax on Monday.

Brittany Jones, a mother of three, says she sees the change on the Eastside.

"It's more calmer. It's not so much people, so many more people hanging out. That's a big thing and then a lot of people, it's communications. They talk. I haven't seen any fights and stuff like that," said Jones, who has lived in the area for two years.

For last 90 days, Cure Violence -- led by the Noah's Ark Project, outreach workers and violence interrupters -- has been working on the Eastside in Zone 1 -- a community that has seen heartbreaking violence.

Cure Violence is passing out "Don't shoot" cards with a list of "no shoot zones" in the neighborhood as a reminder to put the guns down.

"These cards are effective with the individuals that we are targeting because it reminds them of the places where they can have a negative impact because of their actions," Cook explained. "It certainly is not saying that there are shoot zones. That is not the case. We are advocating peace and no violence everywhere."

It's seems to be working. According to Cook, the Eastside in Zone 1 and the Northside in Zone 5 have had at least 25 days of no shootings or killings. 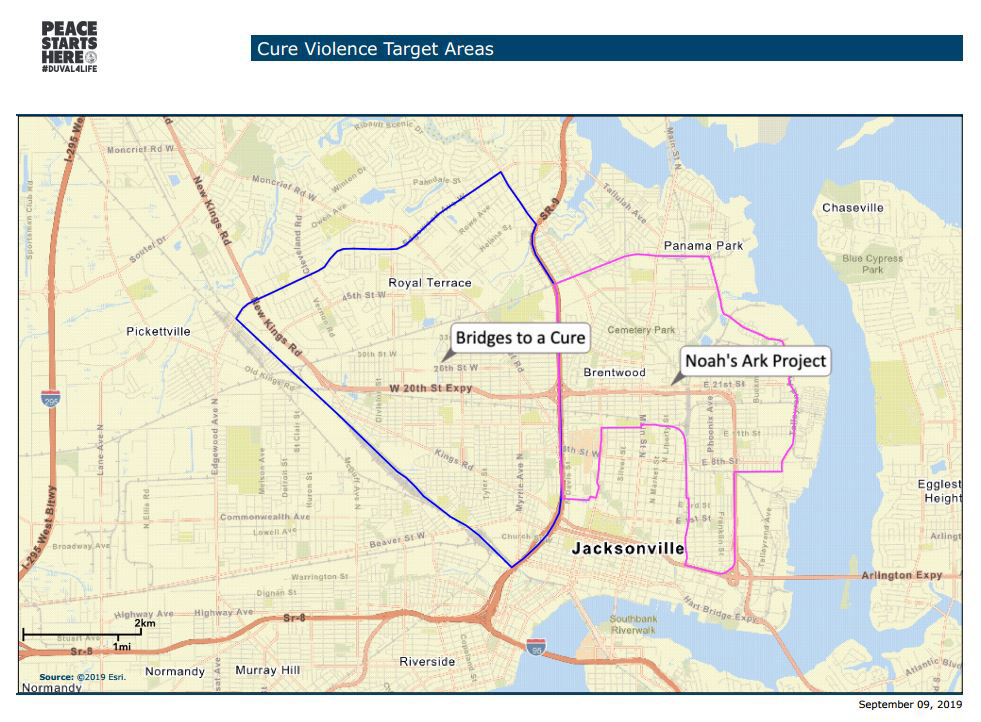 Jones says she sees the change and hopes it will stay that way for her family.

"It has been OK and safe, so I feel comfortable with them being over here," she said.

Whether it is through walking through the community, cards with reminders for peace or simply talking to people, Cure Violence says it is working hard to keep peace for everyone.

One of the violence interrupters, Jackie Bell, told News4Jax by phone that, "They are not soaking that," meaning they are not working with police.