Local activists speak out about mass shooting in Buffalo

Dozens of people without a home because of apartment fire

JSO: One person dead after shooting in Downtown Jacksonville

Keep tabs on your home with this affordable smart cam

More than two-thirds of incidents were fault of city employee

JACKSONVILLE, Fla. – First responders rush through the streets to save lives every day, but that comes with a risk and, sometimes, a cost. With more than 30 crashes involving Jacksonville police and fire vehicles last week, city leaders are once again concerned about safety.

The Jacksonville Sheriff's Office alone had 24 crashes last week, with the officers at fault in 17 of them. Jacksonville Fire-Rescue vehicles were involved in seven additional crashes, and five were found to be the firefighters' fault. 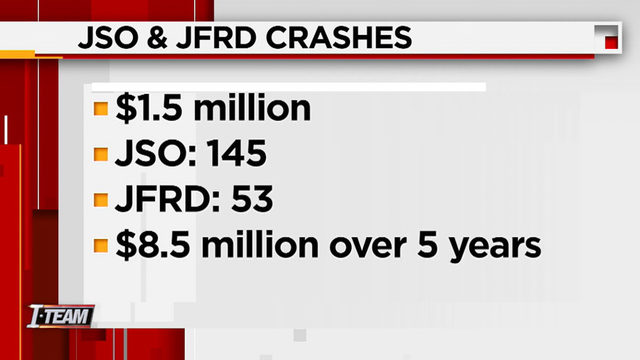 Earlier this year, the I-Team reported that crashes of city vehicles cost taxpayers an average of more than $1.5 million each year.

Last year, JSO had 145 crashes last year and JFRD had 53. Over the past five years, the city has paid $8.5 million to repair or replace damaged vehicles.

JSO Public Information Officer Chris Hancock said the number of crashes last week is concerning, but wrecks are job hazards when police and firefighters are on the streets 24/7.

"Obviously, we're not at fault in all of them," Hancock said. "Some of them we are, no doubt, we'll take that. But the training that comes along before you get into these police cars is monumental, if you will."

Our first responders work every day to make our city safer. We train and retrain for emergency vehicle operations (commonly referred to as ‘EVOC’) every year with the goal of keeping both our personnel and the people we serve safe from harm. We can’t say it enough, safety is a top priority. Each and every accident is subject to extreme scrutiny and individually reviewed to determine the cause and to identify the need for any operator/driver improvement. "

"You got emergency vehicles traveling back-and-forth trying to answer calls from citizens, trying to get there in a timely manner. Eventually, something is going to happen like this," Jefferson said.

Officers and firefighters found at fault in accidents have to go through additional training, could get written up and also sometimes face traffic citations.