In this week’s restaurant report rodents, roaches, and flies oh my!

JACKSONVILLE, Fla. – Safety is a priority for the city as thousands flock to the River City for a friendly football rivalry.

In the midst of the 86-year rivalry tradition between the Florida Gators and Georgia Bulldogs, a team of police officers, firefighters and fire responders is working to keep everyone safe as drinking and partying can easily lead to trouble.

One-third of the Jacksonville Sheriff's Office is working to keep fans safe, and they are telling everyone: "We are here for you."

"The city of Jacksonville does a great job down here," Bulldogs fan Scott Wall said. "We really enjoy it."

"Every two minutes somebody is by in a golf cart (or) walking," Gators fan Ben Johnson said. "It's been nice. No issues."

"Past few years we haven't had any issues here," said Wesley Skinner, also a Florida fan.

So far this year the biggest issue was a generator at RV City that caught fire, and flames soaring into the night sky were seen all around. The fire was put out quickly and no one was injured.

"We had a fire that was right in front of the compound here and the first department was, like, on it instantaneously," witness Tara Taylor said. 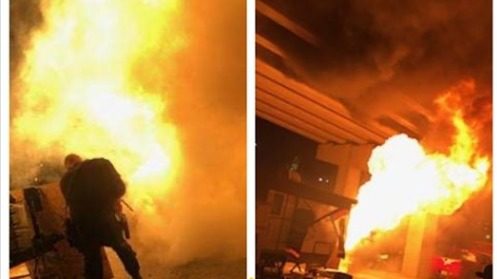 On Friday, firefighters went through RV City to make sure all generators have a 5-foot clearance.

Police and state law enforcement will also be mingling in the crowd looking for underage drinking.

"We will have undercover and uniform officers enforcing this," Chief Andre Ayoub said earlier this week. "Underage drinkers will be held accountable for their actions."

But for anyone of any age who has had too many, the city has set up six safe zones where people can go for help and the police will not be called.

The oversight helps most fans focus on their beloved rivalry.

"Ultimate goal is for the Gators to win and drink some beer," Johnson said.